Pakistan condemns ex-PM Sharif over comment on attack on India 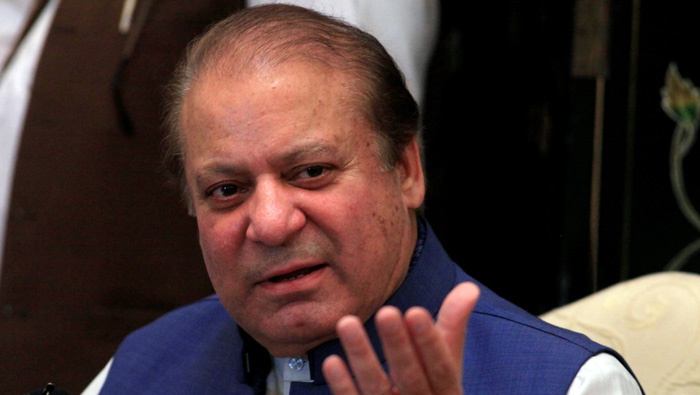 Islamabad: Pakistan's top civil and military leaders on Monday condemned a suggestion by ousted Prime Minister Nawaz Sharif that militants who killed 166 people in India in 2008 had crossed the border from Pakistan.
The comments - in which Sharif implied he was removed from office by the Supreme Court last year for trying to end military support for anti-India militants - led to an uproar in Pakistan, where criticising the military is increasingly considered a "red line" that cannot be crossed.
The National Security Council (NSC), in a special meeting on Monday called by the military, rejected Sharif's comments in an interview with Pakistan's Dawn newspaper as "incorrect and misleading", the prime minister's office said in a statement.
"The participants unanimously rejected the allegations and condemned the fallacious assertions," the office said, referring to military and civilian leaders. "(NSC) observed that it was very unfortunate that the opinion arising out of either misconceptions or grievances was being presented in disregard of concrete facts and realities."
The statement was a rare rebuke of Sharif by a government run by his own party, highlighting political tension in the run-up to a general election expected in July.
Sharif's criticism of the military has caused divisions within his party, analysts say, with some members unhappy about his confrontational approach. The Supreme Court disqualified three-time prime minister Sharif from office in July last year over unreported sources of monthly income of less than $3,000 from a United Arab Emirates company, a salary he denied ever receiving.
The military, which has ruled Pakistan for about half its history, denies any interference in civilian politics. India blamed the militant group Lashkar-e-Taiba (LeT) for the 2008 attack on the city of Mumbai.
Ten gunmen spent three days spraying bullets and throwing grenades around landmarks. India said the gunmen were Pakistani and had arrived on the Mumbai waterfront by rubber boat after crossing the Arabian sea from the Pakistani city of Karachi in a trawler.
India blamed Pakistan for failing to act against those behind the raids. Pakistan admitted the attacks were planned on its soil but denied any official involvement, and did not confirm the gunmen had set sail from Karachi.
Some Western powers and India have accused the military of supporting militant groups for use as tools in achieving foreign policy objectives, but the military denies that. '
Sharif, in the Dawn interview, obliquely criticised the military by denouncing "parallel governments". He said there should only be one constitutional government.
The United States also blames LeT for the Mumbai attacks and has offered $10 million for information leading to the arrest and conviction of Hafiz Saeed, who heads Muslim charity Jamaat-ud-Dawa (JuD), which Washington says is a front for LeT.
Efforts by Pakistan to put on trial those India says are responsible for the Mumbai attack have stalled, while Saeed operates largely freely in Pakistan. Sharif, asked about his ouster, brought up issues of security and foreign policy - which the military controls.
"Militant organisations are active. Call them non-state actors, should we allow them to cross the border and kill 150 people in Mumbai? Explain it to me. Why can't we complete the trial?," Sharif said, according to Dawn.
"We have isolated ourselves. Despite giving sacrifices, our narrative is not being accepted," Sharif said. Sharif on Monday morning told reporters that he stood by his comments, according to Daily Pakistan and Geo TV. But after the NSC meeting, Prime Minister Abbasi said he had met Sharif and the former leader told him he was "misquoted".