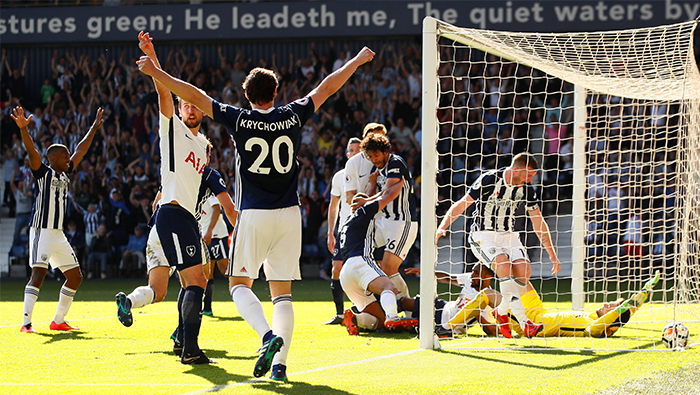 London: Mauricio Pochettino was left dismayed by Tottenham Hotspur's shock, last-gasp, 1-0 defeat at West Bromwich Albion on Saturday as it reignited the late battle in the Premier League for Champions League places.
Spurs had been expected to leapfrog Liverpool into third place against an Albion side battling for top-flight survival but Jake Livermore's stoppage-time winner has instead renewed Chelsea's hopes of gatecrashing the top-four race.
If Chelsea beat third-placed Liverpool on Sunday they would move on to 69 points, two behind Spurs and three behind Juergen Klopp's side, while also enjoying a game in hand over the Reds, going into the final set of matches next week.
Pochettino still expects his side to deliver in home matches against Newcastle United and Leicester City, telling the BBC: "It is in our hands. If we are not able to win the next two games we do not deserve to qualify for the Champions League."
Tottenham had scored in each of their last 23 Premier League games but this time even their totemic marksman Harry Kane came closer to scoring an own goal than filling the opposition net.
"Of course, I am disappointed. We are in a race to be in the top four and play in the Champions League next season and that defeat disappoints us. It is a certainly a bad feeling after the game," Pochettino said.
"We dominated the game. We created enough chances but didn't score. I am not upset or angry, only disappointed; we need to be clinical."
Manchester City are already crowned champions and second-placed Manchester United have also guaranteed their top-four place but a Chelsea win on Sunday would add an extra frisson to the final week.
Chelsea's final two games are at home to Huddersfield Town and away to Newcastle, while Liverpool, who will also have a Champions League final date occupying their minds, will play Brighton & Hove Albion on the final Sunday.