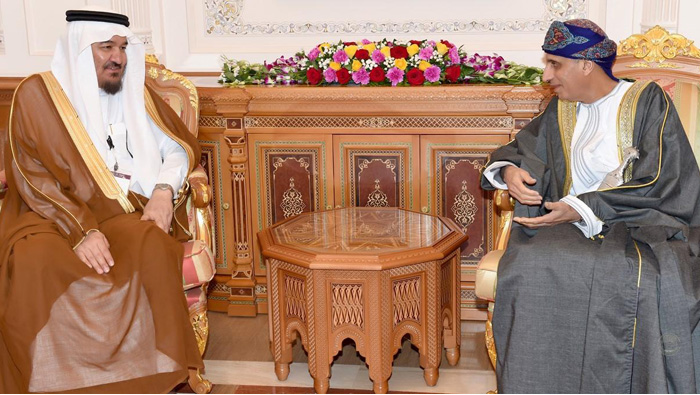 Muscat: His Highness Sayyid Fahd bin Mahmoud Al Said, Deputy Prime Minister for the Council of Ministers yesterday received Prof. Tawfiq Khoja, Secretary General of the Arab Hospitals Federation (AHF) who is currently visiting the Sultanate to take part in the 19th AHF annual forum under the theme "Partnering to Develop the Healthcare Sector”. The event is being hosted by the Sultanate, represented by the Ministry of Health.
Welcoming the guest, Sayyid Fahd expressed his appreciation of the AHF distinguished role in enhancing the Arab joint action and provision of best health services for all.
Sayyid Fahd affirmed the Sultanate's keenness, under the leadership of His Majesty Sultan Qaboos bin Said, to provide all potentials for maintaining citizens' safety and providing complete healthcare for them.
He also reviewed the march of health sector and its achievements through expansion in establishing hospitals that are provided with the latest technologies, as well as rehabilitation of Omani cadres who are offering the best services for patients.
Conversation touched on cooperation between the Sultanate and AHF in healthcare and environmental fields, therapeutic services, training and sharing expertise to upgrade health programmes.
On his turn, Prof. Tawfiq Khoja expressed the AHF appreciation over the efforts being exerted by the Sultanate, as well as the wise policies being pursued in developing healthcare. He also praised the health sector in the Sultanate, as well as the care and attention enjoyed by the Omani citizen within the framework of comprehensive development being witnessed by the country.
The meeting was attended by Dr. Ahmed bin Mohammed Al Sa'eedi, Minister of Health.