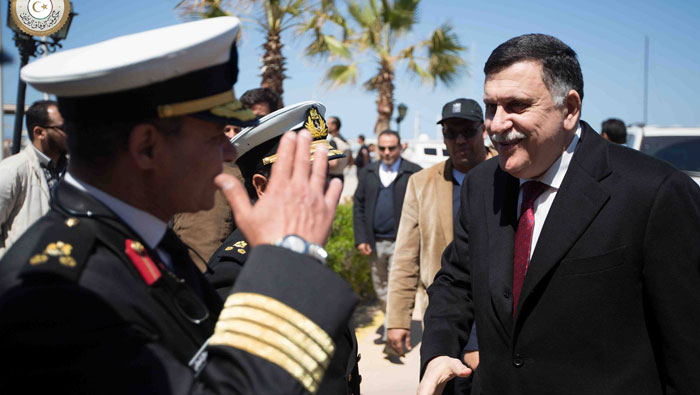 Tripoli: Members of Libya's UN-backed Presidential Council reached Tripoli by ship on Wednesday, defying attempts to keep them out of the city and prevent them from installing a unity government.
Seven members of the Council including Fayez Seraj, its head and the new government's prime minister, arrived from Tunisia at Tripoli's Abusita naval amid tight security, a Reuters reporter witnessed.
A separate self-declared government also based in Tripoli and armed groups that back it had warned the Council and the unity government not to travel to the capital.
Tripoli's airspace was closed for several hours on Sunday and Monday, a move the Council said was designed to prevent it from reaching Libya.
Seraj told Reuters that the council members had travelled in a Libyan navy vessel from the Tunisian port of Sfax, a 12-hour journey.
"There are challenges ahead of us, including uniting Libyans and healing divisions," he said after arriving. "Young people are the ones we must bet on for Libya's future."
The unity government emerged from a UN-mediated deal signed in December aimed at ending the country's political impasse, resolving its armed conflict and tackling a growing threat from IS militants.
Western powers have recognised it as Libya's sole legitimate government, but it has faced continuing opposition from hardliners in both eastern and western Libya.
Since 2014 Libya has had two competing pairs of parliaments and governments, both backed by loose alliances of armed brigades. The government in Tripoli was brought to power by armed factions that won a battle for control of the capital in 2014.
Tripoli, home to many armed factions, has seen sporadic clashes in the past few days. Early on Wednesday, loud explosions followed by heavy gunfire were heard over the city.
Ahead of its arrival, the Council said it had negotiated a security plan with police and military forces in Tripoli, and with some armed groups.
The road outside the naval base was heavily secured with checkpoints and armoured vehicles on Wednesday. Security forces were also stationed inside the base, and some guards arrived with the Council members.
The Council has called for an immediate transfer of power to the unity government, though both the Tripoli and eastern-based governments oppose this.
The unity government's 18 members have so far failed to secure a vote of approval from Libya's eastern, internationally-recognised parliament, as required under the UN-mediated deal, and Fathi Al Mrimi, a spokesman for eastern parliament's president, said its arrival was "premature".
"They have entered by force under foreign protection, and Libyans won't accept anything imposed on them by force," he told Reuters.
UN Libya envoy Martin Kobler welcomed the Council's arrival, saying the international community was "ready to provide the required support and assistance", and that all Libyan security actors had a responsibility to ensure its safety.
EU foreign policy chief Federica Mogherini said it was "a unique opportunity for Libyans from all factions to reunite and reconcile".