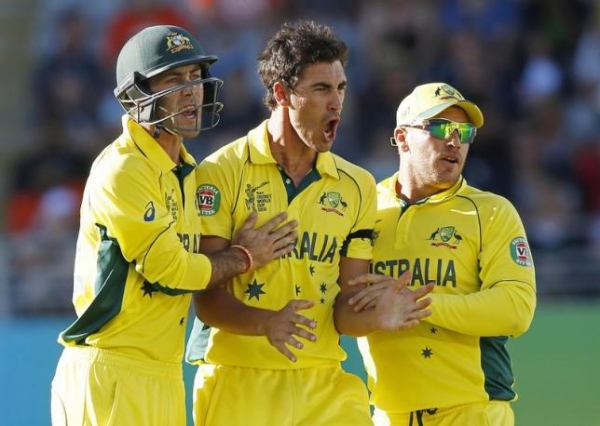 Melbourne: Left-arm fast bowler Mitchell Starc will return from a broken foot during Australia's limited-overs triangular series in the West Indies in June.
Starc broke his foot during the inaugural day-night test against New Zealand in Adelaide last November and missed the rest of Australia's summer programme.
He also used the enforced break to have surgery on an ankle injury that had been bothering him for the past year.
The 26-year-old began running slowly at the end of last month and had been gradually building his fitness and was named in the squad for the tournament on Wednesday.
"Mitchell has progressed very well in his rehab and the medical staff are confident he will be fit to play in this series," chairman of selectors Rod Marsh said in a statement.
"It is extremely pleasing to have a bowler of his calibre back in the side."
South Australia batsman Travis Head has also been called into the one-day squad for the first time after an impressive domestic season, which included making his Twenty20 international debut against India in Adelaide on January.
Head scored a double century for South Australia in the domestic one-day competition, a century in the Twenty20 competition and was named the first class Player of the Year after scoring 721 runs that included three centuries.
"Travis has put in some match-winning performances in all three formats of the game this summer," Marsh said.
"He is an exciting young batsman with a bright future and if he gets his opportunity I have no doubt he will make the most of it."
Wicketkeeper Matthew Wade has also returned to the one-day side after he was dumped for the World Twenty20 tournament in India for test keeper Peter Nevill.
Test off-spinner Nathan Lyon has also been given an opportunity to prove his credentials in the shorter forms of the game, with the 28-year-old having played just 10 one-day internationals in four years.
Leg-spinner Adam Zampa, who impressed in the World Twenty20 in India, has also been included to exploit the expected turning wickets in the Caribbean.
South Africa will also contest the triangular tournament that runs from June 3-26.
Australia: Steve Smith (captain), David Warner (vice-captain), George Bailey, Nathan Coulter-Nile, James Faulkner, Aaron Finch, John Hastings, Josh Hazlewood, Travis Head, Usman Khawaja, Nathan Lyon, Mitchell Marsh, Glenn Maxwell, Mitchell Starc, Matthew Wade, Adam Zampa.