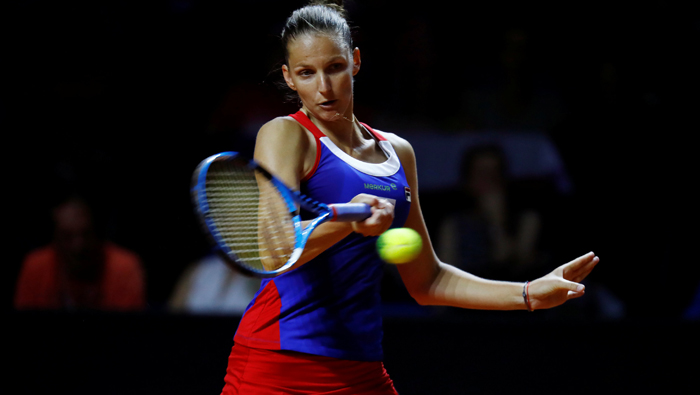 Stuttgart: Karolina Pliskova and Petra Kvitova won their opening singles matches to give Czech Republic a commanding 2-0 lead in their Fed Cup semi-final against Germany in Stuttgart on Saturday.
Kvitova powered past German number one Julia Goerges 6-3 6-2 before Pliskova produced a sublime display to record a 7-5 6-3 victory over Angelique Kerber.
Pliskova, who had lost in her previous three encounters with Kerber, fired 15 aces and faced no break points as she subdued the home fans in Stuttgart.
"No one expected it," Pliskova said after the German failed to win a set on day one.
Kvitova recorded her 29th Fed Cup victory on the back of a strong serve and a string of blistering groundstrokes.
World number 11 Goerges was stronger in the opening exchanges and raced to a 3-1 lead in the first set before Kvitova rediscovered her rhythm to level things up.
The 28-year-old Czech claimed nine of the last 11 games and dropped just two points on her serve to seal the victory on the stroke of an hour. The 10-time champion Czechs are looking to reach the Fed Cup final after a one-year absence.
The last time Germany won the Fed Cup title was in 1992 in Frankfurt.