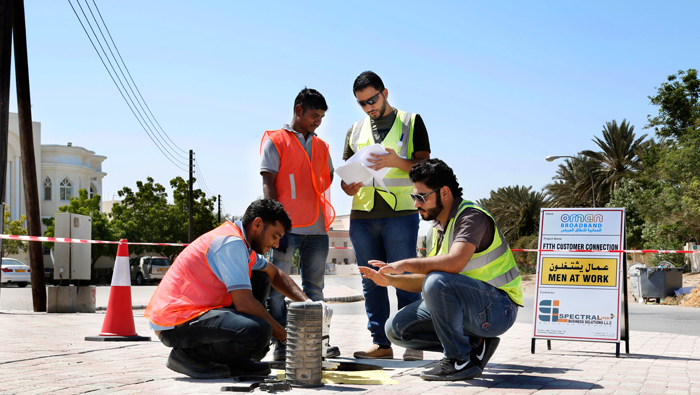 Muscat: Efforts to cover the Governorate of Muscat with fibre optic service are moving forward, and by 2020, 85 per cent of most residential areas in the governorate will be covered, said Oman Broadband Company (OBC) CEO Eng. Said bin Abdullah Al Mantheri.
He said that during this period, fibre optic service will be completed in Al Amerat and Al Khuwair, in addition to some expansions in Al Khoudh, Al Maabela, Bausher, Al Ansab, Ruwi and Al Qurum.
He added that completion percentage in supplying fibre optics exceeded the percentage set by the Telecommunications Regulatory Authority (TRA).
He said that this year, the company will cover about 65 per cent of the governorate of Muscat and this percentage will rise next year, especially when large neighbourhoods are opened in Bausher, Al Ansab and Al Amerat.
He noted that the service will be also be provided outside the Governorate of Muscat in places like the Wilayats of Salalah, Al Musannah, and Madha. He stressed that work is underway on the completion of the remaining places in the Wilayat of Salalah and the industrial and residential areas in the Wilayat of Sohar.
He also said that the other projects will be synchronised with the implementation of electricity and water projects, and that a number of governorates of the Sultanate’s governorates will be decided later during this year.
About the challenges in rationalising spending, Eng. Al Mantheri said that the government implemented in 2017 its commitments to subsidise the company and completed the payment of the money needed to implement the projects, since the beginning of 2018, the company focused on its financial plan to rely on external loans, adding that loans were obtained, thus the financing of projects will be through external financing and their operating costs will be covered by the revenues.
He added that the loans obtained by the company come to cover the projects carried out according to the plan and for a period of three years until the end of 2020.
He added that the focus at the end of Stage One of the plan will be on the implementation of projects related to the delivery of service in all areas of the Governorate of Muscat, as well as 30 per cent outside Muscat, adding that the company has worked to rationalise spending until it reaches the proportion of self-reliance and cover the operational costs.
He said that the company has been working in cooperation with the operators to find solutions to connect fibre optic in different remote and mountain wilayats and villages, due to the different terrain in the Sultanate and, therefore a decision was taken to cover the entire of Muscat and 30 per cent outside it, and 70 per cent will be covered by satellite and wireless networks or mobile networks.