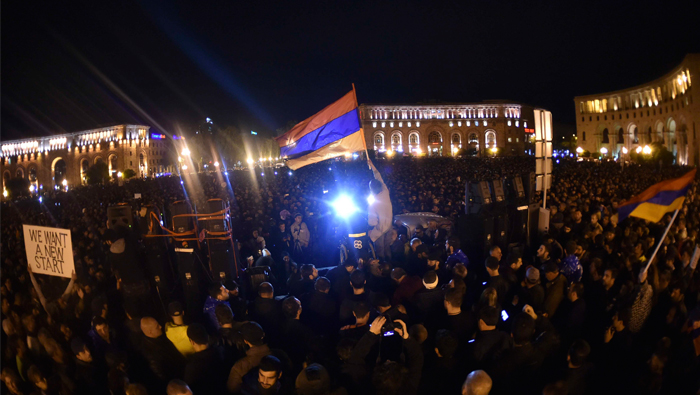 Yerevan: Armenian Prime Minister Serzh Sarksyan, appointed this month after 10 years as president, called for immediate dialogue on Saturday with opposition protesters who accuse him of clinging to power and demand he step down.
Sarksyan's call coincided with a ninth consecutive day of rallies by tens of thousands of opposition supporters demonstrating against his appointment.
"I'm deeply concerned by political developments in the country and call on MP Nikol Pashinyan to start a political dialogue in order to avoid irreversible losses," Sarksyan said in a statement.
"It should be done immediately."
Pashinyan, an opposition MP and the leader of the protests, said it was "too late to talk to the government."
"I'm calling on Serzh Sarksyan to accept our demand," he told journalists.
Parliament voted on Tuesday to allow Sarksyan, who served as president of the small ex-Soviet republic from 2008 until this month, to become premier, in a job switch his opponents say show he wants to continue to wield power.
Under a revised constitution approved by a referendum in 2015, the prime minister now has the most power in Armenia, while the presidency has become largely ceremonial.
Sarksyan's ally, Armen Sarkissian, was sworn in as president last week after being elected by parliament in March.
Opposition activists marched through the capital Yerevan on Saturday, waving national flags and chanting: "Make a stand, say no to Serzh."
They blocked several streets in the centre and staged sit-ins.
Police had detained about 200 activists on Friday.
The Defence Ministry called on demonstrators to unblock streets around the ministry and to stop preventing movement of cars with the ministry's number plates.
"Any such attempt will be strictly prevented," the ministry said in a statement.
Armenia seceded from the Soviet Union in 1991 but remains dependent on Russia for aid and investment.
Many Armenians accuse the government of corruption and mishandling an economy that has struggled to overcome the legacy of central planning.