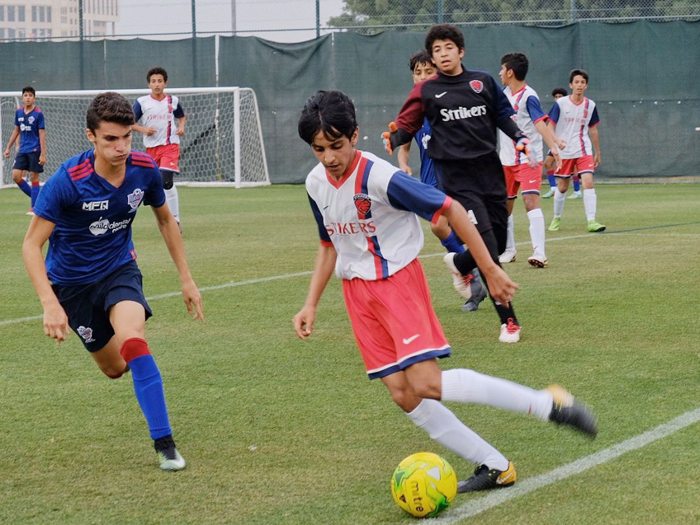 Winning isn’t everything in sport. While many may scoff that this is a phrase losing teams repeat to console themselves, the truth is that losing a game teaches you far more than winning ever can. Although Muscat Football Academy (MFA) may have won precious little at the Mundialito in Spain, the lessons they learned at the Junior World Cup have translated into success closer home. The academy have been crowned champions of the 2018 Gulf Cup, which was recently held at Dubai Sports City – a result that bodes well for youth football in the Sultanate.
“A wonderful day for MFA. History was created,” said MFA head coach Chuck Martini, speaking to Times of Oman. “This has been a great achievement by our players and a day to remember for all those associated with the academy. I would like to say a big ‘well done’ to all my players, starting with my under-10s who competed in an elite tournament in an under-11 age category and they will learn from this experience,” he said.
“Our under-13s were fantastic from start to finish for winning the Gold Cup and Silver Cup,” added the former Leicester City and Tottenham Hotspur goalkeeper. “I am very proud of all of them. What an achievement for them, winning in their first outing in the under-13 age category. Capping off the night was our under-15 team who won the Gold Cup in a very tough and physical tournament. These boys are some of the best talents that we have in the academy and I am extremely happy with the progress that they have shown.”
The head coach had praise not just for the players and coaches, whose hard work and dedication paid off on the pitch, but for those who made the magic happen behind the scenes as well: The parents of these young players. “I would like to thank you all for the support that you have shown to the academy and to all our players,” he said. “A big thank you to my dear friends at Child Dental Centre for their loyalty and continued support both on and off the field. Last but not least, a big well done to my team of coaches.”
A total of 18 academies came to the FIFA-approved pitches at Dubai Sports City, with teams first drawn into groups of three. MFA winning their group gave them direct passage into the final, with the other two teams of their group only qualifying for the Silver Cup.
The Muscat Football Academy under-13 team that had made it to the finals had previously tasted success not too long ago, at the Man City Cup in Abu Dhabi. That team was a mixture of children under the ages of 11 and 13, and this was their first experience in such a senior age group.
“The team that won in Abu Dhabi managed to reach the final of the Gold in their first outing at this age level. This is a fantastic performance from them. We won our first game 5-0 and the second game 2-1; so we managed to get through both games and we played AC Milan in the final,” Martini said.
With such a large under-13 squad brought to the tournament by MFA, Martini and his coaches decided to split it into two. One of the teams, after losing to AC Milan Academy Kuwait, clinched the Silver Cup, while the other won the Gold Cup, beating FC Barcelona Escola Saudi Arabia en route to victory.
“Our under-10s are very young, so they understandably struggled, but they made it to the semis of the Silver Cup, and this is the first time they have competed in such a tournament so nothing much was expected of them but to go out and play,” added the former Morocco international.
“The tournament has been run fantastically, the facilities and the grass pitches are absolutely amazing,” he admitted. “It is a really great facility I wish we had in Oman. The boys have enjoyed it immensely because they love the feel of playing on real grass; and the feel of the tournament, with such large crowds watching, has really been amazing,” he added.