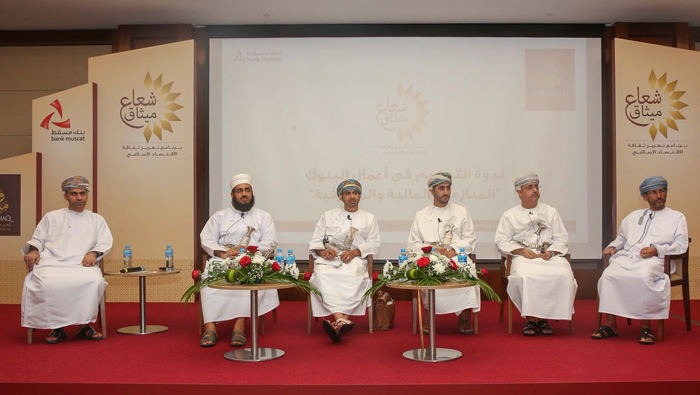 Muscat: Meethaq, the pioneer of Islamic banking in Oman from Bank Muscat, in line with the vision ‘To serve you better, everyday’, organised a seminar on ‘Arbitration in Banking Business’ under the auspices of Dr Abdullah bin Mohammed Al Saidi, Minister of Legal Affairs, at Crowne Plaza Hotel - Oman Convention & Exhibition Centre.
The Shua'a Meethaq initiative, aimed at raising awareness and highlighting the role of Islamic finance in the economic development of Oman, was addressed by experts, including judges and ministry officials. The discussions covered the role of arbitration in developing the economy and attracting investment, basics of arbitration in bank disputes, laws applicable to arbitration procedures and development of a local arbitration centre.
The seminar called for speeding up the establishment of a specialised arbitration centre in the Sultanate. The recommendations also included amending the arbitration law in civil and commercial disputes in keeping with international developments to attract investment and expedite adjudication of cases as well as the adoption of best international practices in this regard.
The seminar also called for a comprehensive review of all rules governing arbitration in Oman, to meet the requirements and achieve the objective of relying on arbitration as a substitute for a judicial process. The seminar highlighted the need for setting up a specialised centre for studies and research related to Islamic financial industry, starting with a technical office for studies and research, to be followed by the establishment of the Supreme Authority for Sharia Supervision at the Central Bank of Oman.
Sulaiman Al Harthy, deputy chief executive officer - Islamic Banking, in the welcome address, thanked Dr Abdullah Al Saidi for his patronage at the seminar and the attendance and participation of judges and experts from the country’s courts and legal institutions.
Sulaiman Al Harthy said: “Meethaq is proud to host the seminar on arbitration and highlight a very important topic which has received much attention from the government and private institutions. The participation of experts and the wide range of topics discussed at the seminar have opened new horizons to develop and enhance the role of arbitration in resolving banking and financial disputes. Through the implementation of best practices, Islamic banks and financial institutions can make major contributions to defining a charter for arbitration in Oman.”
Dr Khalifa bin Mohammed Al Hadrami, Vice President of the Supreme Court and Chairman of the Commercial Department of the Administrative Council, delivered a speech in which he said that integration into the global economy made it necessary to settle disputes in alternative ways to formal judicial methods. Alternative dispute settlement methods are becoming a necessity in the era of globalisation and GATT agreements and the country's economic and commercial growth. Arbitration is one of the most important alternative methods developed by many countries to settle disputes. Some countries have achieved great success in this regard. The purpose of arbitration is to avoid delays in dispute settlement and maintain confidentiality, especially in the commercial field where procedures are required to preserve rights. Dr Khalifa Al Hadrami stressed the importance of organising such seminars, adding that the seminar recommendations can be applied to enhance the role of commercial arbitration in the next phase of development in the Sultanate.
The key objectives of the seminar included raising awareness on commercial arbitration, introducing best practices and opening a dialogue with specialists on the establishment of a local arbitration centre. The seminar also highlighted legal aspects related to commercial arbitration, including the Commercial Arbitration Law No. 470 of 1997.
The seminar discussed the current legal framework for dispute resolution in the Islamic banking and finance industry. With the increasing significance of Islamic financial services, the seminar noted that there was the need for a paradigm shift to sustainable dispute resolution practices.