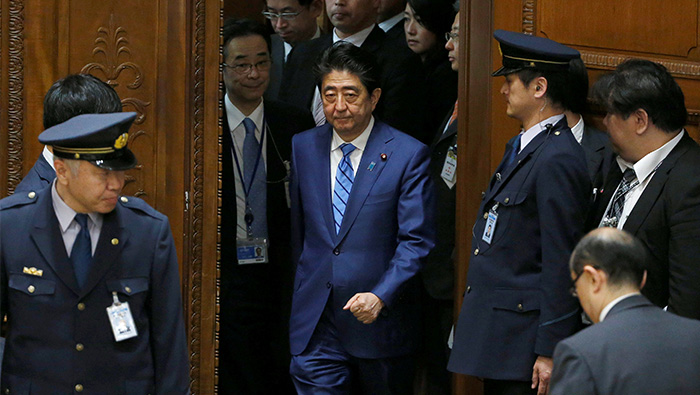 Tokyo: Japanese Prime Minister Shinzo Abe denied on Wednesday that he had intervened to secure preferential treatment for a friend's plan to set up a veterinary school despite new reports he had discussed the matter with the friend.
Abe's ratings have taken a hit because of several scandals over suspected cronyism and cover-ups, with a steady stream of new allegations raising doubts about how long he can stay in power.
One of the scandals involves suspicion Abe helped a friend, Kotaro Kake, director of school operator Kake Gakuen, set up a veterinary school in a special economic zone exempt from a rule limiting the number of such schools.
Abe has denied that he ever instructed officials to give preferential treatment for the establishment of Japan's first new veterinary school in more than 50 years.
Abe repeated to a parliamentary panel on Wednesday his assertion that he only became aware of Kake's proposal when it was approved in January 2017.
His was replying to questions after media this week cited an April 2015 memo from an official in Ehime prefecture, where the school ultimately opened in the special government-designated deregulation zone, that said Kake and Abe had discussed the proposal while sharing a meal.
"No one received instructions from me. There was no problem with the (approval) process," Abe told the parliamentary panel in response to a question about the memo.
Asked repeatedly whether he had at least had casual talks about the plan with Kake, Abe said his friend had neither consulted him nor asked for favours.
"He said he wanted to take on a new challenge, but we never discussed specifics," Abe said.
The veterinary schools affair, which emerged last year, is one of several suspected cronyism scandals and cover-ups eroding Abe’s support as he eyes a third term as ruling Liberal Democratic Party leader in a September vote.
Victory in the party poll would set Abe, who took office in 2012, on track to become Japan’s longest-serving premier.
Abe has also denied that he or his wife intervened in the heavily discounted sale of state-owned land to another school operator, Moritomo Gakuen, who had ties to Abe’s wife, Akie.
The finance ministry has admitted doctoring documents related to the murky deal.
Separately, Defence Minister Itsunori Onodera apologised again on Wednesday after the military found missing troop activity logs.
Among recently lost-and-found records are those from a controversial 2004-2006 deployment to Iraq. The logs could shed light on whether the dispatch was to a "non-combat" zone as asserted by the government at the time, in line with constitutional limits on military activities abroad.