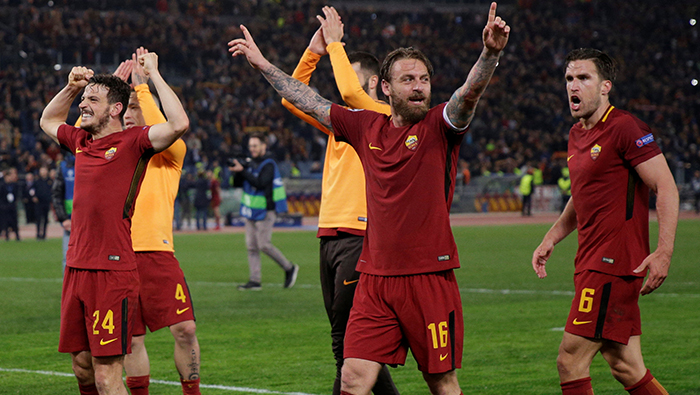 Rome: AS Roma pulled off one of the great Champions League comebacks by knocking Barcelona out with a remarkable 3-0 win in their quarter-final second leg on Tuesday, overcoming a 4-1 deficit from the first game to reach the last four on away goals.
Roma's Kostas Manolas headed the decisive third goal in the 82nd minute, putting the Italians in the semi-finals for the first time since they reached the European Cup final in 1984 and making amends for his own goal in the first leg at the Nou Camp.
Roma forward Edin Dzeko had opened the scoring when he beat the offside trap and latched onto a perfectly weighted through ball from Daniele De Rossi to score in the sixth minute, lifting the hopes of the boisterous home fans in the Olympic Stadium.
Captain De Rossi converted a penalty in the 58th for the hosts after Dzeko was fouled by Gerard Pique, giving Roma a deserved second goal after Dzeko and his Czech strike partner Patrik Schick missed two clear chances each before the break.
"This would be a great triumph for any team, but for Roma and considering our story in European competitions, it’s truly incredible," De Rossi told reporters.
"We knew it would be difficult, but we had that little bit of belief. The first leg showed us Barcelona had a lot of quality, but not as much as a few years ago. We knew the gap between us and them wasn’t 4-1."
Barca fielded the team that thrashed Roma in the first leg with the help of two own goals and were overwhelming favourites to go through but the five-times European champions barely got a foothold in the game after falling behind to Dzeko's opener.
Barca swamped
Ernesto Valverde's side were swamped by Roma's high pressing and struggled to get hold of the ball as they were bullied in the air by the more physical Italian side, who inflicted the damage with long balls over the top and frequent crosses.
The visitors' Sergi Roberto squandered the first chance of the game but after that Barcelona struggled to respond to Roma's constant waves of attacks until substitute Ousmane Dembele whistled a long-range shot just over the bar in added time.
"We weren’t capable in any moment of getting in the game because of how they approached the game," said Barca coach Valverde. "They were very strong with second balls and we aren’t used to defending like that."
The runaway La Liga leaders had not lost in the Champions League this term until visiting Rome but slumped out at the quarter-final stage for the third year in a row after being eliminated by Juventus last season and Atletico Madrid in 2016.
"It's difficult to accept this elimination because we had a lot of hope for this season and once again it has escaped us," said Barca captain Andres Iniesta.
It was a reversal of fortune for Barcelona who last term pulled off the greatest comeback in Champions League history by overcoming a 4-0 loss to Paris St Germain.
They join PSG and AC Milan (eliminated by Deportivo La Coruna in 2004) as the only teams to have been knocked out after winning the first leg by at least three goals.