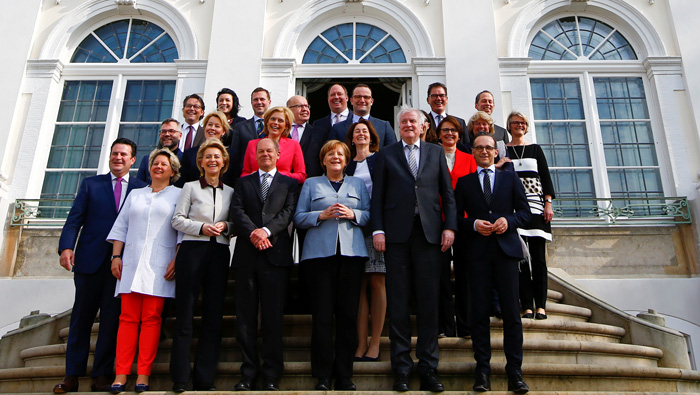 Berlin: A debate over whether to ban Muslim girls under 14 from wearing headscarves in public, prompted by a similar proposal in Austria, has divided Germany's governing conservatives.
Chancellor Angela Merkel, already struggling to paper over cracks in her month-old coalition cabinet, is unlikely to welcome a call for action from members of her own camp that exposes the country's uneasy attempts to integrate its 4 million Muslims.
That process has taken on added complexity following the influx of over one million mostly Middle Eastern and North African migrants in 2015 and 2016, and sharp election gains for the far-right, anti-immigrant Alternative for Germany (AfD) party.
Germany's parliament already passed a law last year preventing civil servants, judges and soldiers from wearing full-face veils at work.
Interior Minister Horst Seehofer, a member of the Bavarian CSU conservative party, and Farm Minister Julia Kloeckner, from Merkel's more moderate Christian Democrats (CDU), said they now backed a headscarf ban for schoolgirls.
Kloeckner argued it was needed to prevent children from growing up with "crude gender stereotypes". But other conservatives, including integration commissioner Annette Widmann-Mauz, on Tuesday said such a ban would create constitutional problems and challenge parental rights.
Seehofer, whose Bavarian CSU bled support to the AfD in the September national election, aims to woo back those voters before a regional Bavarian ballot in October, in part by taking a more hardline stance on security and immigration.
He drew a firm rebuke from Merkel last month after saying Islam did not belong to Germany. Germany's centre-left Social Democrats (SPD), junior partners in Merkel's squabbling coalition, generally oppose a ban on headscarves.
Ibrahim Yetim, the party's expert on integration, called it "half-baked" in comments to the German Catholic News Agency on Monday. Austria, where conservative Chancellor Sebastian Kurz has forged a coalition with the far-right Freedom Party (FPO), announced plans for a headscarf ban in primary schools and kindergartens on April 4 to combat what the government sees as a threat to Austrian mainstream culture.