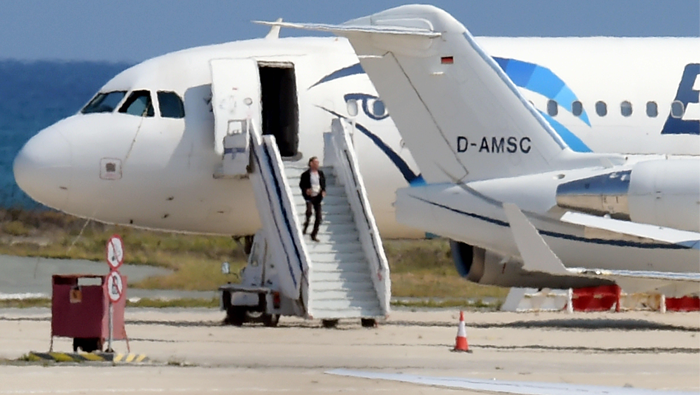 Larnaca (Cyprus)/Cairo: An EgyptAir plane flying from Alexandria to Cairo was hijacked and forced to land in Cyprus on Tuesday by a man with what authorities said was a fake suicide belt, who was arrested after giving himself up.
The passengers and crew were unharmed. Eighty-one people, including 21 foreigners and 15 crew, had been on board the Airbus 320 when it took off from Alexandria en route to Cairo, Egypt's Civil Aviation Ministry said in a statement.
Conflicting theories emerged about the Egyptian hijacker's motives. A senior Cypriot official said he was psychologically unstable and the incident did not appear related to terrorism. The Cypriot state broadcaster said he had demanded the release of women prisoners in Egypt.
Watch: Egyptian plane hijack update
In the midst of the crisis, witnesses said the hijacker had thrown a letter on the apron at Cyprus's Larnaca airport, written in Arabic, and asked that it be delivered to his Cypriot ex-wife.
After the aircraft landed at Larnaca, negotiations began and everyone on board was freed except three passengers and four crew, Egypt's Civil Aviation Minister Sherif Fethy said.
Soon afterwards, Cypriot television footage showed several people leaving the plane via the stairs and another man climbing out of the cockpit window and running off.
The hijacker then surrendered to authorities.
"Its over," the Cypriot foreign ministry said in a tweet.
Egyptian Prime Minister Sherif Ismail said the hijacker would be questioned to ascertain his motives. "At some moments he asked to meet with a representative of the European Union and at other points he asked to go to another airport but there was nothing specific," he said.
Egypt's Civil Aviation Ministry said the pilot, Omar Al Gammal, had told authorities that he was threatened by a passenger who claimed to be wearing a suicide explosive belt and forced him to divert the plane to Larnaca.
Reached by telephone, Gammal told Reuters that the hijacker seemed "abnormal".
"I am not in a state to speak," said the exhausted-sounding pilot, adding that he had been obliged to treat the suicide belt as a serious security threat.
Photographs shown on Egyptian state television showed a middle-aged man on a plane wearing glasses and displaying a white belt with bulging pockets and protruding wires.
Television channels showed video footage of the hijacker, identified as Seif Eldin Mustafa, 59, being searched by security men at a metal detector at Borg Al Arab airport in Alexandria.
Interior Ministry officials said he was expelled from law school and had a long criminal record, including robberies.
Fethy, the Egyptian minister, said authorities suspected the suicide belt was not genuine but treated the incident as serious to ensure the safety of all those on board.
"Our passengers are all well and the crew is all well... We cannot say this was a terrorist act... he was not a professional," Fethy told reporters after the incident.
EgyptAir delayed a New York-bound flight from Cairo onto which some passengers of the hijacked plane had been due to connect. Fethy said it was delayed partly due to a technical issue but partly as a precaution.
The hijacked plane remained on the tarmac at Larnaca throughout the morning while Cypriot security forces took up positions around the scene.
The incident will deal another blow to Egypt's tourism industry and hurt efforts to revive an economy hammered by political unrest following the 2011 uprising that ousted veteran ruler Hosni Mubarak.
The sector, a main source of hard currency for the import-dependent county, was already reeling from the crash of a Russian passenger plane in the Sinai peninsula in late October.
President Abdel Fattah Al Sisi has said the Russian plane was brought down by a terrorist attack. IS has said it planted a bomb on board, killing all 224 people on board.
The latest incident raised renewed questions over airport security in Egypt, though it was not clear whether the hijacker was even armed. Ismail said stringent measures were in place.
Passengers on the plane included eight Americans, four Britons, four Dutch, two Belgians, an Italian, a Syrian and a French national, the Civil Aviation Ministry said.
Cyprus has seen little militant activity for decades, despite its proximity to the Middle East.
A botched attempt by Egyptian commandos to storm a hijacked airliner at Larnaca airport led to the disruption of diplomatic relations between Cyprus and Egypt in 1978.
In 1988, a Kuwaiti airliner which had been hijacked from Bangkok to Kuwait in a 16-day siege had a stopover in Larnaca, where two hostages were killed.