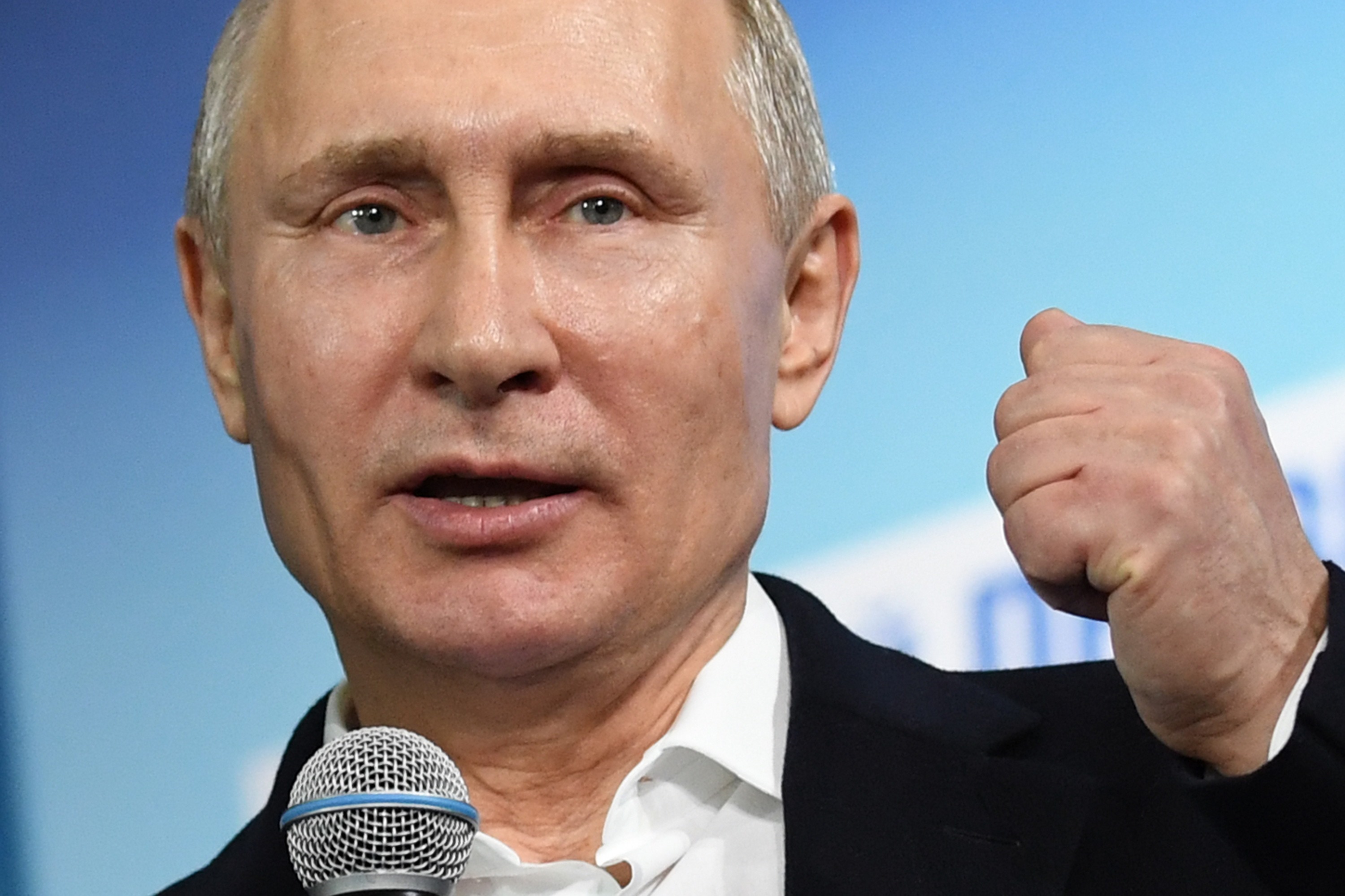 Moscow: Russian President Vladimir Putin basked in a landslide re-election victory on Monday, extending his rule over the world's largest country for another six years at a time when his ties with the West are on a hostile trajectory.
Putin's victory will take his political dominance of Russia to nearly a quarter of a century until 2024, the longest rule since Soviet dictator Josef Stalin, by which time Putin will be 71. He has promised to use his new term to beef up Russia's defences against the West and to raise living standards.
In an outcome that was never in doubt, the Central Election Commission, with nearly 100 per cent of the votes counted, announced that Putin, who has run Russia as president or prime minister since 1999, had won 76.66 per cent of the vote.
In a late night victory speech near Red Square, Putin told a cheering crowd he interpreted the win as a vote of confidence in what he had achieved in the last few years in tough conditions.
"It's very important to maintain this unity," said Putin, before leading the crowd in repeated chants of "Russia!" He told a meeting of supporters afterwards that difficult times were ahead, but that Russia had a chance to make "a breakthrough."
Backed by state TV, the ruling party, and credited with an approval rating around 80 per cent, he faced no credible threat from field of seven challengers.
His nearest rival, Communist Party candidate Pavel Grudinin, won 11.8 per cent, according to near final results, while nationalist Vladimir Zhirinovsky got 5.6 per cent. His most vocal opponent, anti-corruption campaigner Alexei Navalny, was barred from running.
Critics alleged that officials had compelled people to come to the polls to ensure that boredom at the one-sided contest did not lead to a low turnout.
Near final figures put voter turnout at 67.47 per cent, just shy of the 70 per cent the presidential administration was reported to have been aiming for by Russian media before the vote.
Russia's Central Election Commission said on Monday morning it had not registered any serious complaints about violations, and there were half as many irregularities as reported in the last election in 2012.
Putin loyalists said the result was a vindication of his tough stance towards the West.
"I think that in the United States and Britain they've understood they cannot influence our elections," Igor Morozov, a member of the upper house of parliament, said on state television.
Valentina Matviyenko, speaker of the upper house, hailed the victory as a moral one over the West.
"Our elections have proved once again... that it's not possible to manipulate our people," she said. "People came together."
Chinese President Xi Jinping was among the first to offer his congratulations to Putin, saying in a Chinese Foreign Ministry statement he believed Russia would "definitely continue to create new glories for national development."
Opposition leader Navalny is expected to call for anti-Putin protests demanding a re-run of an election he says was neither free nor fair and international observers were due to give their verdict on how clean the election was later on Monday.
The longer-term question is whether Putin will now soften his anti-Western rhetoric.
Putin's bellicose language reached a crescendo before the election in a state-of-the-nation speech when he unveiled new nuclear weapons, saying they could hit almost any point in the world and evade a US-built missile shield.
At odds with the West over Syria, Ukraine, allegations of Russian election meddling and cyber attacks and the poisoning in Britain of a former Russian spy and his daughter, Moscow has seen relations with the West reach a post Cold War low.
Allies laud the former KGB agent as a father-of-the-nation figure who has restored national pride and expanded Moscow's global clout with interventions in Syria and Ukraine.
Critics accuse him of overseeing a corrupt, authoritarian system and of illegally annexing Ukraine's Crimea region in 2014, a move that isolated Russia internationally.
Western sanctions on Russia imposed over Crimea and Moscow's backing of a pro-Russian separatist uprising in eastern Ukraine remain in place and have damaged the Russian economy, which rebounded only last year after a prolonged downturn.
Britain and Russia are locked in a diplomatic dispute over the spy poisoning incident, and Washington is eyeing new sanctions on Moscow over allegations it interfered in the 2016 US presidential election, which Russia denies.
Putin said late on Sunday it was nonsense to think that Russia would have poisoned former Russian spy Sergei Skripal and his daughter in Britain and said Moscow was ready to cooperate with London.
Officials and analysts say there is little agreement among Putin's top policymakers on a new economic strategy. A government reshuffle is likely to take place after Putin's inauguration in May.
How long Putin wants to stay in power is uncertain.
The constitution limits the president to two successive terms, obliging him to step down at the end of his new mandate -- as he did in 2008 after serving two four-year terms. The presidential term was extended from four to six years, starting in 2012.
Asked after his re-election if he would run for yet another term in office, Putin laughed off the idea.
"Let's count. What, do you think I will sit (in power) until I'm 100 years old," he said, calling the question "funny."
Although Putin has six years to consider a possible successor, uncertainty about his long-term future is a potential source of instability in a fractious ruling elite that only he can keep in check.
Kremlin insiders say Putin has selected no heir apparent, and that any names being circulated are the product of speculation and not based on insider knowledge of Putin's thinking.
"The longer he stays in power, the harder it will be to exit," said Andrei Kolesnikov, senior fellow at the Carnegie Moscow Center, a think tank. "How can he abandon such a complicated system, which is essentially his personal project?"