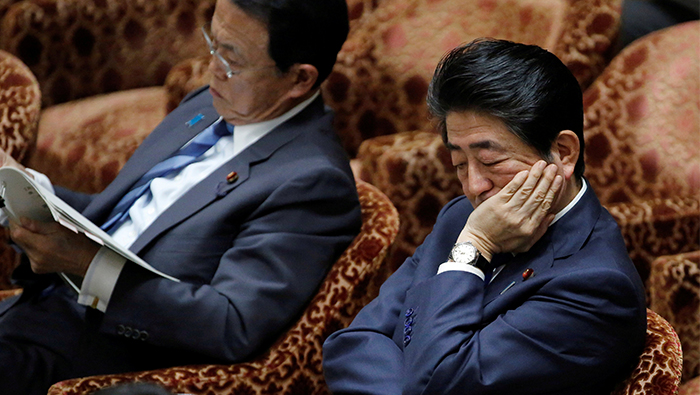 Tokyo: Japanese Prime Minister Shinzo Abe's office was aware in early March of potential problems with documents about a controversial land sale to a school operator with ties to Abe's wife, his top spokesman said on Thursday, amid suspicions of a cover-up.
Abe and Finance Minister Taro Aso have faced fire since the finance ministry's admission this week that it had altered records involved in the discounted sale of land to the school operator.
The affair has sparked calls for Aso to quit and could dash Abe's chances of securing another three-year term from September, when the ruling party will hold a leadership election.
Abe has denied wrongdoing by himself or his wife Akie, while Aso has denied he instructed changes to the records.
References to Abe, his wife, and Aso were removed from the finance ministry's records of the sale, copies of documents released by the ministry showed.
Chief Cabinet Secretary Yoshihide Suga said the land ministry had told his deputy on March 5 about possible gaps between documents in its possession and materials the finance ministry had previously submitted to parliament.
Suga himself was told on March 6 and thought that his deputy told Abe about the matter the same day, he told reporters.
On March 8, the finance ministry submitted copies of what it later acknowledged on March 12 were altered documents.
Asked why he had not made the land ministry's concerns public, Suga said, "It was not a stage where we could confirm the documents."
He did not see a problem with how the premier's office handled the matter, he added.
Opposition Constitutional Democratic Party of Japan senior lawmaker Seiji Osaka blasted Suga's explanation.
"This is complete sophistry and a desecration of parliament," he was quoted by the Kyodo news agency as saying.
The scandal has paralysed parliamentary proceeding and even some in the ruling party are calling for Aso to resign.
"To draw a line under the situation, it's obvious he should step down as a person who holds the highest responsibility of the finance ministry," former ruling Liberal Democratic Party lawmaker Taku Yamazaki told the Nikkei daily on Wednesday.
Aso has rejected the calls to quit and said responsibility for the land sale lay with Nobuhisa Sagawa, who stepped down as tax chief on Friday last week.
Sagawa headed the finance ministry division that submitted the documents before he became tax agency chief in July.
A ruling party source told Reuters on Thursday that Aso would not attend a meeting of Group of 20 finance leaders in Buenos Aires next week amid the wrangling in parliament.
Japan is seeking exemptions from import tariffs planned by U.S. President Donald Trump. Aso's absence from the G20 meet would deprive it of a lobbying opportunity, amid growing fears of a trade war that could hurt its export-reliant economy.