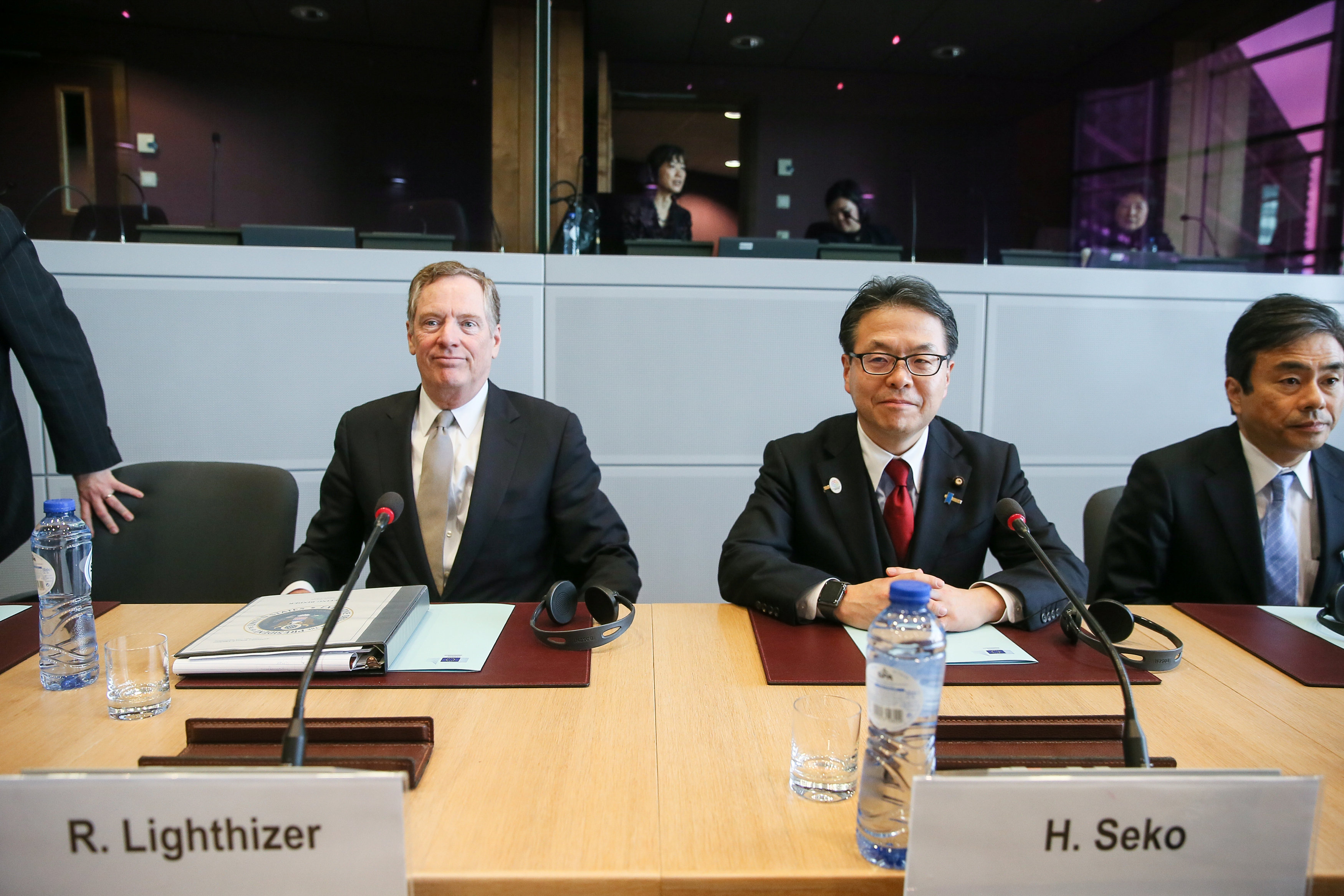 Brussels: The European Union (EU) and Japan urged the United States on Saturday to grant them exemptions from metal import tariffs, with Tokyo calling for "calm-headed behaviour" in a dispute that threatens to spiral into a trade war.
US President Donald Trump set import tariffs on Thursday of 25 per cent on steel and 10 per cent on aluminium, to come into force in 15 days. But he exempted Canada and Mexico and held out the possibility of excluding other allies.
After meetings with US trade envoy Robert Lighthizer in Brussels, EU and Japanese trade officials said negotiations would need to continue.
Europe's trade chief Cecilia Malmstrom described talks with Lighthizer as "frank" and said they had not brought clarity on the exemption procedure. Talks would continue next week.
"As a close security and trade partner of the US, the EU must be excluded from the announced measures," she tweeted after bilateral and trilateral meetings.
Japanese Trade Minister Hiroshige Seko said he had expressed Japanese concern to Lighthizer and warned of major market disruption.
"We call for calm-headed behaviour," he told reporters.
Seko did not go into what conditions might allow Japan to evade tariffs and, asked if Lighthizer had brought up the US trade deficit with Japan, Seko said no.
"He only explained the schedule and the procedures," he said.
Any Japanese response, he said, would be in line with World Trade Organisation (WTO) rules: "If there is a violation, then we will seek consultations," Seko said. "We will look at the impact on Japanese businesses and make a final decision."
Japan's trade ministry issued a statement earlier on Sunday, saying that Seko told Lighthizer that exports of steel and aluminium from Japan, which is a close ally of the US, would not affect US national security. Seko also said these exports had made key contributions to US industries and jobs, the statement said without elaborating.
The European Union and Japan, the United States' top economic and military ally in Asia, also reiterated that their exports were not a threat to US national security, rejecting Trump's justification for imposing the tariffs.
Lighthizer did not make any immediate comment after the meetings.
The three parties did agree on joint steps to tackle global steel overcapacity and distorted market practices, including stronger rules on subsidies and more sharing of information about market abuse.
The visit had been planned for weeks as a follow-up discussion on overcapacity, seen by observers as a swipe at China. However, it took on more urgency after Trump's tariff move.
Commission Vice President Jyrki Katainen warned Washington on Friday not to expect any concessions to win an exemption.
"This is not a trade negotiation," he said. "We are talking about unilateral action against international rules."
The European Commission, which coordinates trade policy for the 28-nation EU, the world's biggest trading bloc, has said it is ready to impose safeguards, tariffs or quotas to protect its own steel and aluminium industries from products diverted to Europe because of the US measures.
It has already started monitoring incoming metal flows to see whether a surge occurs.
The EU is also maintaining a threat of counter-measures that would target US imports ranging from maize to motorcycles, and may publish its list next week to allow industry and other interested parties to give their input. Under WTO rules, such counter-measures have to be in place within 90 days of the US tariffs entering force.
European steel and aluminium associations have warned that the US tariffs could cost their sectors thousands of jobs.