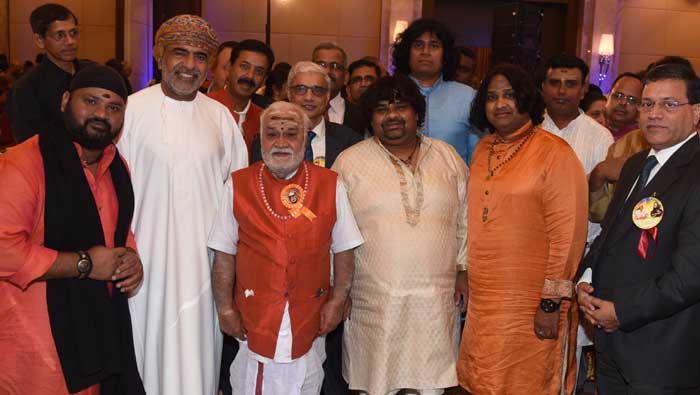 Muscat: First of its kind percussion concert in Muscat ‘Guru Nada Samarpanam’ – A Percussive Consonance of Rhythms, was a runaway success.
Grammy Award-winning percussionist Padma Bhushan T. H. Vinayakram, fondly known as Vikku mama by his fans and loved ones, greeted Muscat with open arms recently at Sheraton, Muscat. Yet another mega event curated by Orbit Events Management was attended by more than 800 in the audience who remained spellbound.
Dr Hamed bin Salim Al Rawahi, CEO of TRA attended the occasion as the chief guest. Expressing his delight, he congratulated all the performers. He also noted the cultural similarities between India and Oman and said that music is one of the most powerful modes of communication that transcends the boundaries of language.
The musicians started off with an invocation to Ganesha, progressing to showcase their immaculate rhythmic vocabulary. U. Rajesh set the tone for the evening with his enchanting silky melodies on the mandolin. Surrounded by dynamic percussionists all around, moments into the show a Ghatam solo by Uma Shankar struck like thunder, as he ripped through in blazing speed on folk percussion.
Selvaganesh was at his interactive best. He illustrated his observation of sounds on a train journey across India. Painting a picture with sounds and creating a lasting impact on the concert that concluded with a grand finale where all nine musicians played in unison. This composition was in raga Sindhu Bhairavi blending folk and classical influences alike. Vikku Vinaykram stole the limelight with a four Ghatam solo, each of them tuned to sequential higher pitches. Ever committed at his age of 75 to offer something new to his audience he had each one seated spellbound. They clapped, chanted and acknowledged his regal performance with a standing ovation.
Traditional and contemporary sounds graced the gleaming hall as music connoisseurs and enthusiasts gathered in numbers to celebrate the evening. Guru Nada Samarpanam led by Vikku Vinayakram featured V. Selvaganesh (hybrid drums and percussion), U. Rajesh (mandolin), V. Umashankar (Ghatam), Umamahesh Vinaykram (vocal), A. Ganesan (morsing), N. Ramakrishnan (Mridangam), N. Rajaraman (gethu) and S. Swaminathan (konnakkol and kanjira).
Vikku Vinaykram performing with three generations, son Selvaganesh, and grandson Swaminathan brought to the fore a glimpse of futuristic sounds. Grandson Swaminathan looked promising, seated between his grandfather and father as he coordinated their riddling rhythmic dialogues and chipped in with his rendition of the compositions.
Guru Nada Samarpanam was truly a percussive consonance of rhythms that was decorated in visual splendour and produced with much care by Orbit Events Management.
Oman Air, Oman Arab Bank, Bank Muscat, BEC, General Automotive Co, Al Anwar Ceramics, Development Services, National Steel Fabricators and many more, supported the event. The Times of Oman was the media sponsor.