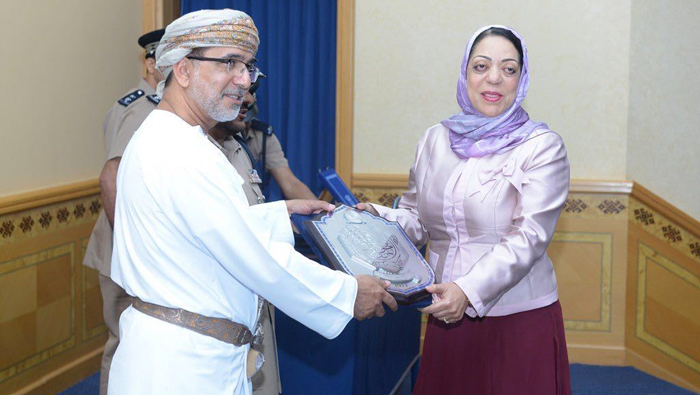 Muscat: Bank Sohar was awarded first place within the private sector in the third edition of the Road Safety Awards organised by the Royal Oman Police (ROP), becoming the first bank in the Sultanate ever to win the prestigious title.
An awards ceremony announcing the winners of the contest was held on February 1 at the Traffic Safety Institute, Muscat under the patronage of Nasser bin Khamis Al Jashmi, undersecretary at the Ministry of Finance.
Representing Bank Sohar at the event were Munira Abdul Nabi Macki, GM - HR and Corporate Support and Mazin Mahmood Al Raisi, Senior AGM and Head of Marketing and Customer Experience. The award, which marks the bank’s 1st recognition in the year 2018, was presented to the bank in acknowledgement of the originality, effectiveness and overall success of its two year Road Safety campaign ‘RakizWaSouq’.
Reiterating the bank’s gratitude towards the Road Safety Award, Mohammed Mahfoudh Al Ardhi, chairman, Bank Sohar, said, “We feel honoured to be the first financial institution in Oman to have won the Road Safety Awards. On behalf of the bank, I would like to thank the Royal Oman Police for recognising the immense enthusiasm and commitment we espouse when it comes to making Oman’s roads safer for future generations. The campaign was launched in line with His Majesty Sultan Qaboos bin Said’s directives towards road safety with the objective to reduce accidents through awareness generation and advocacy. This has been Bank Sohar’s mission right from the campaign’s inception, and we took it upon ourselves to be the first bank in Oman to initiate concerted drives towards road safety. Over the years, we have launched into the endeavour on a massive scale with nation-wide campaigns that encompass the full strength of all the various media channels and with the collaboration of government traffic safety authorities such as the Royal Oman Police, Oman Road Safety Association (ORSA), and Public Authority for Radio & TV (PART). Winning this contest is an immense achievement for the bank and all its partners who have pledged themselves to the cause.”
The main driver for the campaign was a jingle that received nation-wide attention and was actively promoted across all the bank’s media channels. In addition, the bank had also deployed direct communication with the audience on the subject of road safety through regular social media contests as well as online contests on its Facebook, Twitter and Instagram platforms.
Thanking the ROP for the prestigious award, Munira said, “At the outset, I would like to thank the Royal Oman Police and the judging panel for selecting Bank Sohar as the winners of The Road Safety Awards 2017. As a bank with a strong community focused outlook, we have been pioneers for the cause of road safety within Oman’s banking sector and have worked hard and tirelessly to drive home the message of safe road protocol through extensive channels and our award-winning ‘RakizWaSouq’ campaign, which had a major positive impact on its target audience. Our primary goal was to reach to a wide audience where we decided to employ children as ambassadors for the campaign since it is more effective to plant the seed of road safety habits in children as well as encourage them to advise their parents on the subject. We have been tremendously successful at delivering the message as evinced not only by the awards we have received but also the range of effective coverage for the campaign.”
Bank Sohar has been a strong and committed votary for making Oman’s roads safer with significant investments over diverse media channels to effectively reinforce the message. Over the years it has launched campaigns such as `Be Safe.... Be Responsible’ and its widely popular ‘RakizWaSouq’ campaign focuses on disseminating periodical road safety messages. These messages highlight specific driving protocols and are conveyed to children during school roads shows and similar programmes. In addition to receiving the Road Safety Awards 2017, Bank Sohar’s ‘RakizWaSouq’campaign has also been awarded the ‘Best Public Awareness Campaign Middle East Road Safety’ award in November 2016 at the IQPC Middle East – Qatar Transport Safety Awards.
The bank also actively collaborates with designated traffic and road safety authorities to spread its message. Through visiting government and public schools in partnership with the Oman Road Safety Association (ORSA) to conduct demonstrations to students on ways to prevent road accidents. Bank Sohar’s road safety initiatives form a crucial component of its CSR drives under Sohar Al Atta, which it implements with dedication across several social, and community parameters.