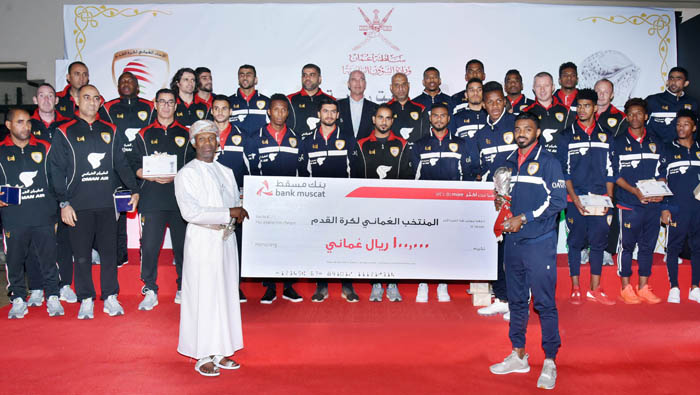 Muscat: Bank Muscat, the flagship financial services provider in the Sultanate, in line with its ‘Let’s Do More’ vision and commitment to partnership in promoting Oman as a sporting nation, rewarded Oman Football Team, the 23rd Gulf Cup champions, at a ceremony hosted by the Ministry of Sports Affairs under the auspices of His Highness Sayyid Haitham bin Tareq Al Said, Minister of Heritage and Culture.
Taya Bait Sabeea, AGM – Capital Region Branches, represented the bank at the ceremony and presented a handsome reward of OMR100,000 to the GCC Cup champions.
Congratulating the team, Abdul Razak Ali Issa, chief executive, said, “Bank Muscat is delighted to honour the Oman Football Team and we join the nation in congratulating all members of the team for achieving a milestone for Oman football. As the flagship bank in Oman, Bank Muscat leads by example and the honouring of the team reflects our commitment to promote Oman as a sporting nation. The gesture towards the team reiterates the bank’s commitment to offering the required encouragement and support for the national teams to put up their best efforts and further lift the national honour to new highs.”
Bank Muscat is a major supporter of the national game of football. In all major tournaments, including the Gulf Cup, Bank Muscat leads by example, being the first private sector institution to announce support for the national team. Bank Muscat aims to strongly convey the message of support to the national teams so as to motivate others to follow suit and provide the required impetus for them to excel in sports and games.
For the 23rd Gulf Cup in Kuwait, the bank announced a handsome reward for the national team which faced the UAE in the title clash. At the start of the championship, the bank, aimed at motivating the team, extended support for the National Team Fans Association members who attended the event to cheer the team.
In keeping with the passion for football in Oman, Bank Muscat seizes every opportunity to promote the national game. Central to the bank’s social responsibility initiatives is the Green Sports initiative to promote Oman as a sporting nation in general and football in particular.
The Green Sports initiative launched in 2012 has gained momentum with 78 sports teams across the Sultanate benefiting from the support till date. Marking the seventh year of the unique CSR initiative, the bank is set to support the development of 15 football fields across the Sultanate in 2018.
The Green Sports initiative has made vital contributions to creating an environment encouraging Omani sports talents. The unique initiative is a big support for the country’s youth to become sporting heroes for the country.