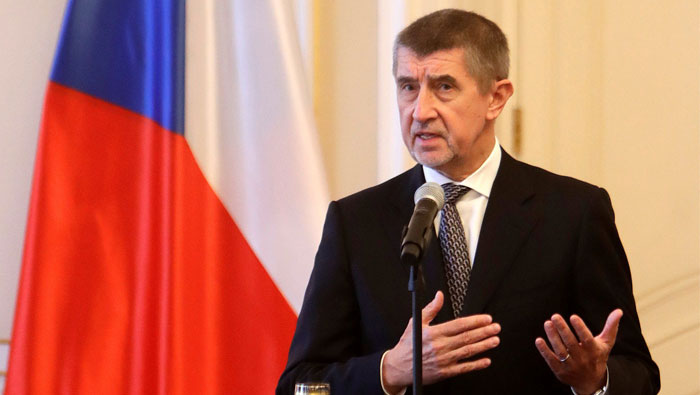 Prague: Czech Prime Minister Andrej Babis will negotiate with the Social Democrats and the Communists to form a new government after parliament rejected his minority cabinet in a confidence vote two weeks ago, he told news website www.idnes.cz.
The billionaire businessman has been trying to form a government since his ANO party won a big victory in an October election but fell short of an overall majority in the country's fractured parliament.
Other parties have so far rejected working with Babis, who faces allegations that he fraudulently claimed European Union subsidies worth 2 million euros a decade ago. He denies any wrongdoing and has rejected calls to nominate another candidate for prime minister.
"A one-party minority government is the best, of course, because it works much better than a coalition," Babis said in an interview published by www.idnes.cz on Monday.
"Of course we will negotiate with the Social Democrats, but I don't know whom they will chose as a chairman at their convention."
Babis has said previously that could not work with current Social Democrat leader Milan Chovanec, a former interior minister, and will wait for the party to elect a new leadership at a February 18 congress before holding more talks.
He repeated that stance in a separate interview with Pravo newspaper, also published on Monday.
Babis has had the support of President Milos Zeman, who said after he was re-elected for another five years at the weekend that he would give Babis ample time to form a government. Babis remains prime minister pending talks with other parties.
Since Babis lost the January 16 confidence vote, the centre-left Social Democrats, the Communists and the far-right SPD party have signalled they might be willing to join a coalition with his ANO or support a Babis cabinet in parliament.
Babis told www.idnes.cz he would prefer to ally with the pro-Russian, anti-NATO Communists -- out of government since the end of their totalitarian rule in 1989 -- rather than the far-right, eurosceptic and anti-NATO SPD.
"I think the Communists. It is a more stable party after all... Everybody has negotiated with them (in the past)," he said in the interview.
ANO has 78 lawmakers in the 200-seat lower chamber of parliament while the Social Democrats and Communists have 15 apiece, giving the three parties a combined 108 votes.
Babis has insisted his cabinet will take a pro-EU stance and not give in to demands to adopt legislation allowing a referendum on leaving the European Union, similar to Britain's June 2016 Brexit vote. A referendum is backed by the SPD and by Zeman, who has said he would vote to stay in the EU.
Babis is visiting Brussels later on Monday, where he will meet European Commission chief Jean-Claude Juncker to discuss migration and his view that a strong union needs to be based on national states rather than centralised power.