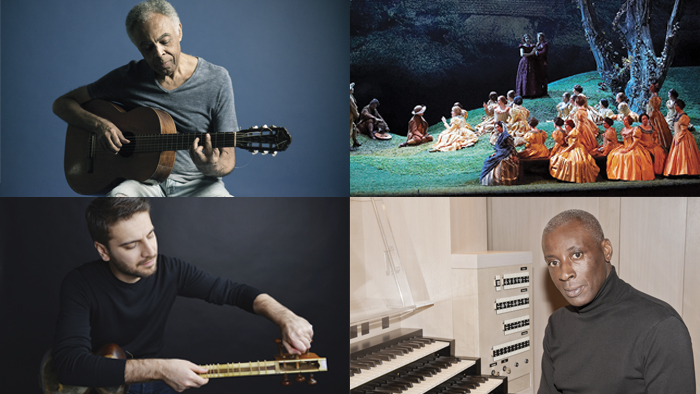 GILBERTO GIL
The multiple Grammy Award-winning singer, guitarist and, songwriter, Gilberto Gil, is known for his intelligently innovative interpretations, deep musicality, and quiet charisma. His music incorporates an eclectic range of influences from Brazilian bossa nova and samba to American rock, African music and reggae. In a career spanning five decades with over fifty albums, Gilberto Gil has played a key role in the development of both Brazilian and World Music. Known as “The Soul of Brazil”, Gilberto Gil’s deeply rooted music celebrates a beloved tropical land and the culture to which it gave rise. He envisions “the music of the land” as “the music of heaven”. Book your seats for 7:00pm on Thursday 4th January on the ROHM website: rohmuscat.org.om

SAMI YUSUF
Beautiful songs about humanity will inspire the audience as Sami Yusuf, the amazing British-Azerbaijani singer-songwriter, performs in concert. His rise to fame began in 2003 at the age of twenty-three with the release of Al Mu’allim, the first of thirty-four million recordings that he would sell. Yusuf’s current album, Barakah, gives voice to his continuing spiritual journey. Sami Yusuf is an international celebrity performing worldwide in sold-out concerts. The Guardian called him “the biggest British star in the Middle East” and Time Magazine lauded him as “Islam’s Biggest Rockstar”. Yusuf is recognised by the UN for his promotion of world peace and harmony. This concert is not to be missed. Book your tickets for Saturday 6th January at 7:00pm at: rohmuscat.org.om

LA SONNAMBULA
La Sonnambula (The Sleepwalker) is one of Vincenzo Bellini’s most popular operas and a landmark work in the bel canto operatic repertoire. The Sleepwalker, Amina, is an orphan about to be married to Elvino, a rich landowner. Elvino becomes jealous and rejects Amina when she sleepwalks into the room of a Count; but, the next night, Elvino relents when he hears Amina singing of her love for him — and the wedding is on again. Amina is sung by the young lyric soprano, Rosa Feola, triple prize-winner at the 2010 Plácido Domingo World Opera Competition; and celebrated tenor, Antonino Siracusa Sings Elvino. This wonderful production by Arena di Verona features evocative sets and costumes by the famous Argentine director, Hugo de Ana. Book your seats on rohmuscat.org.om for Thursday 18th or Saturday 20th January at 7:00pm.

PIPE ORGAN CONCERT
ROHM’s magnificent pipe organ comes alive with a beautiful rendition of Camille Saint-Saëns’ majestic Organ Symphony and other magical pieces led by the British organist, pianist and conductor, Wayne Marshall with the Royal Oman Symphony Orchestra. One of today’s most celebrated organists, Wayne Marshall is also the Chief Conductor of WDR Funkhaus Orchestra in Cologne, Germany and guest conductor for other fine symphony orchestras, including the prestigious Orchestra Sinfonica di Milano Giuseppe Verdi. As a solo musician, Marshall performs at some of the world’s best venues with orchestras such as the Los Angeles Philharmonic and the London Symphony Orchestra. Book Thursday, 25th January at 7:00pm on rohmuscat.org.om
—[email protected]