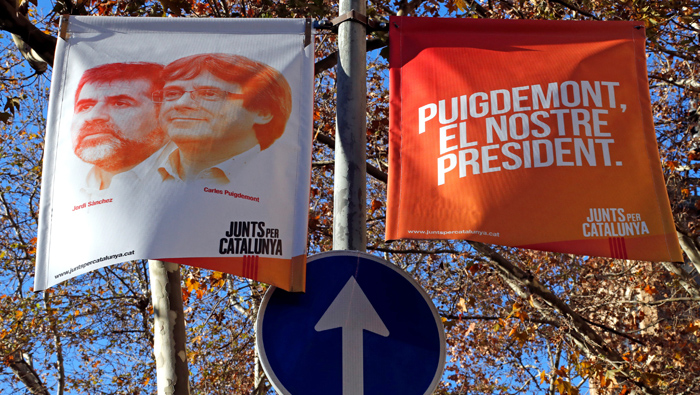 Barcelona: Campaigning drew to a close on Tuesday for Catalonia's election, a potential turning point in the Spanish region's hotly disputed independence crisis.
Catalan separatists gathered to demand freedom for their detained leader Carles Puigdemont as he prepared to hold a rally via videolink from exile in Belgium.
Thursday's regional election pits leaders of the wealthy northeastern region's separatist movement against candidates who want to stay part of a unified Spain.
Voters are highly mobilised and a record turnout is expected, but with pro- and anti-independence candidates neck-and-neck in opinion polls neither side is likely to win a clear majority.
The election is being closely watched across the European Union, which is still reeling from Britain's shock decision to leave and wary about any breakup of the eurozone's fourth largest economy.
It has inflamed passions not just in Catalonia but across Spain, whose government took the unprecedented step of stripping the region of its autonomy after its parliament declared independence on October 27.
But with their camp in disarray, secessionists would likely put their independence drive on hold should they win Thursday's vote, analysts say.
Their independence declaration ended in failure, with more than 3,000 companies relocating from the region, and no country recognising the new "republic".
"These elections will decide whether we return to normality, to the constitution, to reason," Prime Minister Mariano Rajoy told a rally in Barcelona Monday.
While opinion polls suggest a narrow lead for the leftist, pro-independence ERC, voters could ultimately hand victory to centrist party Ciudadanos, whose charismatic candidate Ines Arrimadas has campaigned on a fierce anti-nationalist ticket.
"We're going to speak out so loudly that even Mr Puigdemont in Brussels will hear us," Arrimadas told reporters in Barcelona.
She told La Sexta television the election could ultimately be decided "by a few votes".
"That's why I ask that no one stays home... to put an end to the nightmare of this independence drive and to start a new phase of reconciliation and common sense."
Spain on December 4 dropped an international warrant for Puigdemont, who was axed along with his government by a furious Madrid after the independence declaration. But he will still be arrested should he return to Spain, where he is wanted on charges of rebellion, sedition and misuse of public funds.
Defying the odds, he announced his candidacy for the leadership of Catalonia and is set to end his campaign with a rally that will be streamed via videolink to scores of villages and cities across the region. His axed deputy, Oriol Junqueras, has been campaigning from jail, with his ERC party running on a separate ticket.
Now the separatists are not just fighting pro-unity parties for votes -- but each other. Allowed just 10 phone calls a week from jail, Junqueras has led an unorthodox campaign, giving interviews to Catalan radio and sending articles, letters and even poems to supporters.
But with Spain's government determined to stop the separatists in their tracks, the interior ministry launched a probe against Junqueras and another jailed secessionist over messages recorded from behind bars that were then played at campaign rallies.
On Tuesday, Junqueras's supporters gathered at the prison outside Madrid where he is being held to demand his release. From there, they will travel to Junqueras's hometown near Barcelona, Sant Vicenc dels Horts, for a final rally.
"They (the government) want us subdued and demoralised, to surrender and give up," ERC parliamentary candidate Ernest Maragall said.
A sacked MP from Puigdemont's party, Antoni Castella, also attended the rally.
"We are here to condemn the absolute injustice of jailing innocent people... because of their non-violent ideas, which are representative of the views of the majority of Catalan citizens," Castella said.
The separatist gathering was met with a counter-protest of two dozen far-right activists chanting "Puigdemont to jail!" and "separatists are terrorists".
The Catalan crisis came to a head on October 1, when the now deposed government held a banned referendum on independence. The vote was marred by a brutal police crackdown and triggered the worst political crisis in Spain in decades.
Neither separatist nor pro-unity parties are predicted to win a decisive majority in the 135-seat parliament, which could lead to lengthy negotiations to form a regional government.
"Overall separatists still appear to have a slight edge, despite experiencing a small dip in the polls over the past two weeks," according to Federico Santi of the Eurasia Group consultancy. Ana Luis Andrade, Europe analyst at the Economist Intelligence Unit, agreed.
"Supporters of independence tend to vote more reliably, and the electoral system over-represents rural areas, where nationalist sentiment is strongest," she said.
However if parties are not able to agree on a governing coalition, Catalonia could face fresh elections early next year, which would only prolong political uncertainty in Spain.