Oman's rescue forces are on a 'save and serve' mission 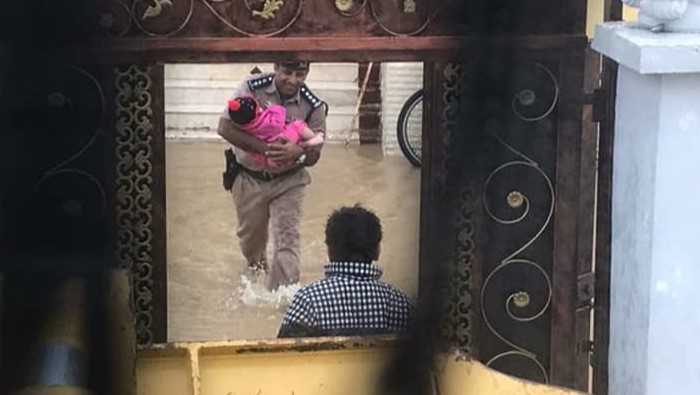 Muscat: Oman’s rescue teams braved torrential rains to save people trapped on flooded streets on Sunday. Also, sea and air ambulances were called into action to transport patients between hospitals, even as weathermen predicted Oman would receive more rainfall on Monday.
Also read: Child dies after falling into drain in Oman
Thousands of people called for help, as heavy rains lashed northern Oman on Sunday. Officials report that two people were killed, and more than 40 others were rescued by government teams. In some locations, the amount of rainfall received surpassed Oman’s annual average — in just 48 hours.
**media[790315]**
“We received some 9,000 calls on Sunday, of which 5,000 calls were related to the weather conditions,” said a rescue official.
Among the victims was a child who died after he fell into a drain at Dima wa’Tayeen in Al Sharqiyah. The Public Authority for Civil Defence and Ambulance (PACDA) received a call about the child, which occurred at Dima wa’Tayeen in Al Sharqiyah, and rushed to the scene.
Video: Readers send in photos and videos of heavy rainfall in Oman
However, PACDA later announced that the child was found by members of his family and taken to a hospital, where he was pronounced dead.
Also, a man died after being electrocuted in Ibri after an electric pole fell on him during the morning. The victim was Asian. The rescue and paramedic teams from PACDA rushed to the scene after being called to assist.
**media[790316]**
An eyewitness to the incident, Ali Al-Ghafri, remarked, “The victim tried to remove the wires with his hands, resulting in his immediate death. The incident happened in an agricultural area, when he was unloading goods from a truck.”
The Royal Oman Police (ROP) said they had received rescue calls for 27 vehicles in the Sultanate, with 32 people being rescued. Seven of those were expats. Three Emiratis were rescued in Dibba in Musandam, three Egyptians were trapped in a wadi, and one Pakistani was trapped in Wadi Haseem in Izki. “No deaths or missing persons were recorded, and those rescued were in good health. No injuries have been registered”, the ROP added.
Later in the day, five people were rescued in Shinas after their home was flooded with water.
Also, three patients were evacuated by sea and air ambulances in Musandam, the National Emergency Management Centre announced on Monday .
According to the centre, the first medical evacuation was made by the Ministry of Health’s sea ambulance from Lima Health Centre to Dibba Hospital.
Officials also mentioned that several houses, and a wall, had collapsed on Sunday.
Damage to educational institutions was reported in the Sultanate, with school walls collapsing in Izki, while a canopy in a college fell through, owing to the weight of rain water in Rustaq. No injuries were reported in either incident.
The Ministry of Regional Municipalities and Water Resources said the wilayat of Mahoot received 143 millimetres (mm) of rainfall between December 15 and 17. Based on historical data, Oman averages 117mm of rainfall annually, while for the month of December the average is 16.5mm.
In a report on weather changes that have affected the country between December 15 to 17, the Ministry of Regional Municipalities and Water Resources announced that Mahoot in Al Wusta governorate recorded the highest amount of rain.
Samail saw 114.2mm of rain, Khasab had 100mm, Nizwa reported 91mm, Al Hamra received 83 mm, and Bahla recorded 67mm of rain. The capital received just 6mm of rain, Muttrah had 9mm and Bausher reported 7mm of rain.
According to the National Multi Hazard Early Warning Centre, Sunday’s rain resulted in flooding and the overflowing of wadis. Officials are expecting more rain on Monday. “We expect heavy to moderate rain on Monday also, so we urge everyone to take precautions,” an official warned.