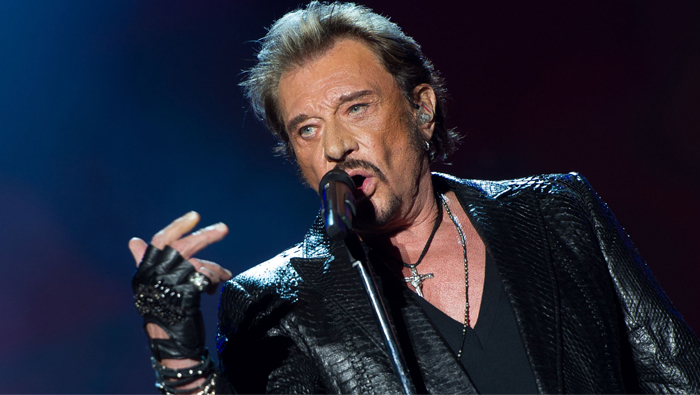 PARIS: Johnny Hallyday, whose death at 74 was announced by his wife and the French president on Wednesday, was a rock and roll giant in his native France, surviving drug use, family strife and near-death episodes to strut the stage for more than fifty years.
Known for his cowboy swagger, gravelly voice, abundant tattoos and leather biker jackets, the "French Elvis" had tens of millions of fans, above all in his native France, where he sold more records than any other singer.
Hallyday died after a battle with lung cancer. His wife Laeticia phoned French President Emmanuel Macron at about 2 a.m. (0100 GMT) with news that triggered an outpouring of grief from fans, politicians and celebrities.
"For more than 50 years, he was a vibrant icon," Macron's office said in a lengthy statement.
Hallyday sold more than 100 million albums over the decades, mostly in the French-speaking world. He never quite conquered the United States, where he lived in Los Angeles in later years.
"I write these words without believing them. But yet, it's true. My man is no longer with us," wife Laeticia said in a statement.
Police were posted outside his house west of Paris. Radio and TV stations provided wall-to-wall coverage of the rocker's life, with reams of black-and-white film and song tapes tracing the history of a man regarded by many, non-fans included, as part of French national heritage.
French-Canadian singer Celine Dion took to Twitter to mourn the loss of "a true icon". American singer Lenny Kravitz posted a tweet saying: "Repose en Paix (Rest in peace). Your soul is pure Rock and Roll."
In Belgium, his father's birthplace, the underground railway authority said it would pipe his music into trains in tribute.
American newspaper USA Today once dubbed Hallyday "the greatest rock star you never heard of," but in France he was a monument known simply as "Johnny."
He easily filled the 80,000-seat Stade de France stadium and sang to more than 750,000 at a free concert he held near the Eiffel Tower on France's Bastille Day national holiday in 2009.
Hallyday's 2011 album "Jamais Seul" went straight to number one, selling 100,000 copies in a week, despite his reputation among younger generations as passé.
A star who forged his career recycling rock gems such as The Animals' version of "House of the Rising Sun" or Jimi Hendrix's "Hey Joe", Hallyday also starred in movies and adverts.
He spoke good English, once claimed to have been born in Oklahoma and said his stage name Hallyday came from a doctor there who saved an acquaintance.
Born Jean-Philippe Leo Smet in Paris to Huguette Clerc and Belgian-born Leon Smet in 1943, Johnny was raised by his aunt Helene Mar when his parents split up.
He spent his early years on the road with his cousins in an acrobatic dance troupe, taking to the stage himself at 12 and singing country songs dressed as a child Davy Crockett.
He changed look after seeing Elvis Presley in "Loving You". His first single, "T'aimer Follement" (To Love You Madly), came at age 16.
Wild stage antics sparked rioting at concerts. The Harley Davidson fan won a name for his hard-living self-destructive streak as well as his chart-topping albums.
Drugs, alcohol and a lot of dark-tobacco Gitanes cigarettes, the latter apparently adopted on the advice of rock icon Keith Richards, all helped to carve out the husky voice and craggy face that become a trademark before age too took its toll.
In 1965 he married pop singer Sylvie Vartan, with whom he had a son, David Hallyday. Their divorce in 1980 was quickly followed by four other marriages, including one lasting 62 days and two to the same woman, Adeline Blondiau.
His fifth marriage was to Laeticia Boudou in 1996, with whom he adopted two daughters, Joy and Jade.
After a back operation in 2008, Hallyday was put into an artificial coma to treat pain caused by an infection, which he had sought for weeks to keep at bay with ever larger amounts of alcohol.
His son David followed him into the music world while daughter Laura Smet, by third wife Nathalie Baye, is an actress.