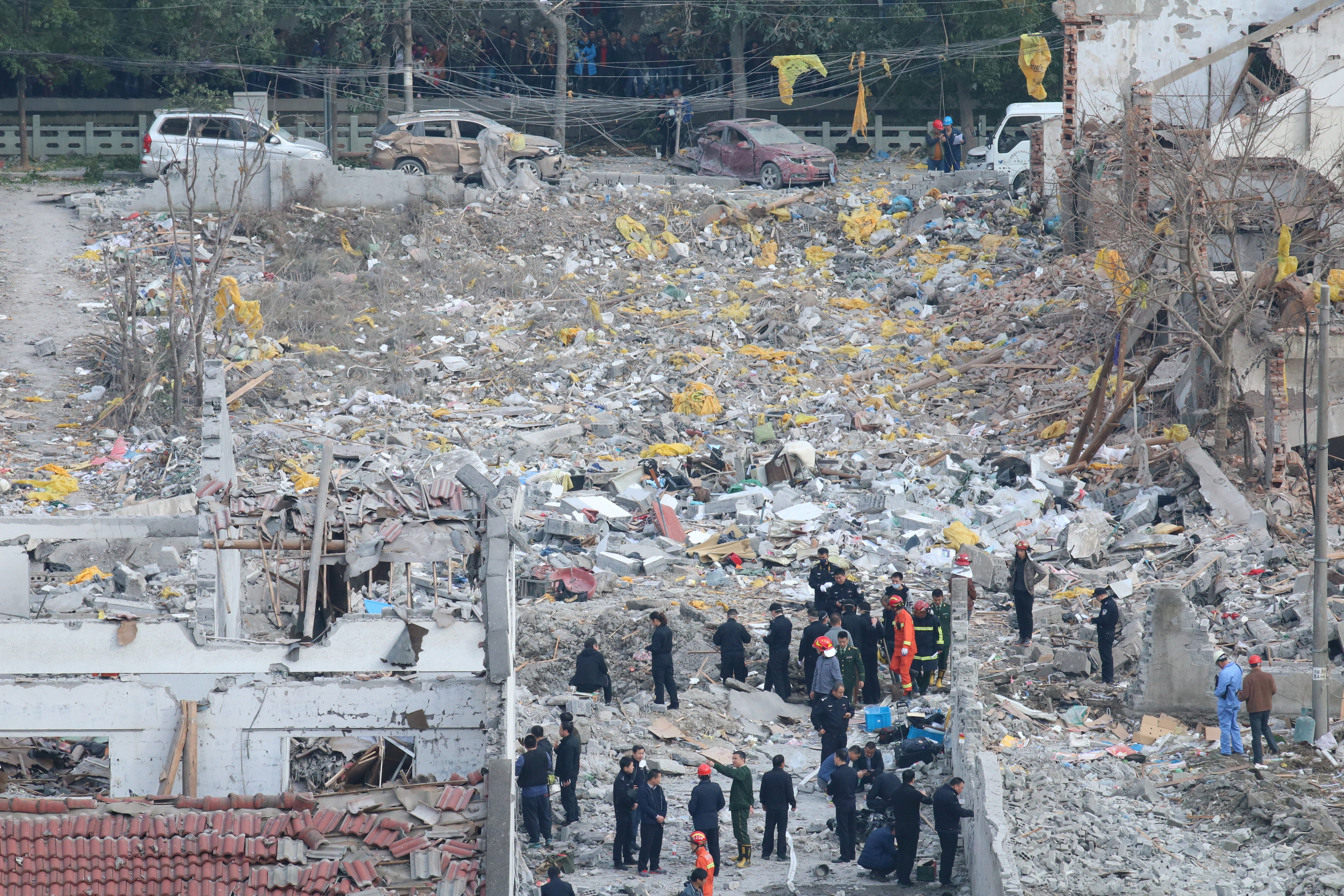 Ningbo (China): A septic tank was the epicentre of a massive explosion that rocked one of China's largest port cities at the weekend, killing two people and injuring at least 19, authorities have said.
The blast tore through a crumbling light-industrial area adjacent to crowded residential towers in the city of Ningbo, just south of Shanghai, and was so powerful that it was heard several kilometres (miles) away.
The force of the explosion shattered windows in nearby apartments, mangled cars and reduced small buildings at the epicentre to rubble, though locals said the structures were already in poor shape and slated for demolition.
Public security officials "have confirmed that the blast's epicentre is a septic tank in an empty field," the local government said in a statement late Sunday.
Methane and hydrogen sulphide -- both highly flammable gases -- can build up in septic tanks.
Officials have ruled out the possibility of a gas explosion or of the blast being intentionally set off by someone.
The statement said in addition to the two fatalities, two people are missing after the explosion. Four people were severely injured and 15 others had minor wounds.
"We were having tea and bwaaaah! It knocked my mother off her stool. It was incredibly loud," said a local woman who lives about 400 metres (yards) from the blast site and who gave only her surname, Wu.
Authorities had thrown up a cordon around the collapsed buildings and were still investigating the cause of the explosion in Ningbo.
An elderly woman said one of her children was in the area at the time of the blast.
"Yes, we live here and one of my children is still inside (the cordoned-off area) and hasn't been found yet," she said, declining to give details.
She dabbed tears with a tissue and repeatedly dialled a number on her phone. Asked who she was calling, she said, "my child".
Early Monday, locals were sweeping up piles of debris and glass at the blast site where rubble was strewn across an area several hundred metres wide.
The government said it had received hundreds of reports of damage, such as shattered glass, twisted window frames or damaged cars.
The local government and state media have variously described the site of the explosion as a vacant lot or an abandoned factory.
An AFP reporter at the scene said the site appeared to be a run-down former light industrial area.
Residents said some people from outside Ningbo had been squatting there, but others disputed that.
"Most people had left here a long time ago. It was just a wasteland lot," Wu said.
She said most structures in the blast area had been crumbling for some time, and that not all the rubble seen was caused by the explosion.
Another local man, who declined to give his name, said: "It's lucky that more people did not die but no one was living here anymore."
China has been rocked by several industrial accidents in recent years.
In 2015, giant chemical blasts in a container storage facility killed at least 165 people in the northern port city of Tianjin.
The explosions caused more than $1 billion in damage and sparked widespread anger at a perceived lack of transparency over the accident's causes and its environmental impact.
A government inquiry eventually recommended 123 people be punished. Tianjin's mayor at the time of the accident was sentenced to 12 years in prison for graft in September.