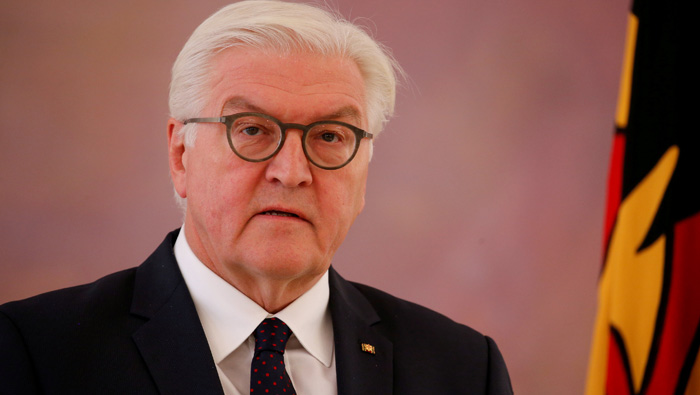 Berlin: Frank-Walter Steinmeier was hardly Chancellor Angela Merkel's first choice for the largely ceremonial job of German president, but the lifelong Social Democrat may be her best hope of holding onto power amid an unprecedented political crisis.
Steinmeier, 61, a two-time foreign minister and lifelong Social Democrat, met on Tuesday with political leaders from the Greens and pro-business Free Democrats (FDP) after Merkel's bid to forge a three-way coalition with those parties collapsed.
On Thursday he will meet Martin Schulz, head of the Social Democratic Party (SDP), the second largest in the Bundestag lower house of parliament, to urge him to reconsider his party's rejection of another "grand coalition" with Merkel's conservatives for the good of the country. Merkel favours new elections over a minority government, but Steinmeier is pressing political leaders to avoid a new poll that experts say would further strengthen the far-right Alternative for Germany (AfD) after it moved into parliament with nearly 13 per cent of the vote on September 24.
"The German president, who is now as powerful as seldom seen in German constitutional history, holds the reins," the Rheinische Post newspaper wrote on Tuesday. This is the first time a German president has had to get actively involved in trying to forge a new coalition government.
The architects of the German constitution devised a complicated process to prevent the frequent elections.
But new elections are likely around April if Steinmeier cannot bring Merkel's conservatives, the Greens and FDP back to the negotiating table, or persuade his former SPD colleagues to return to government. The SPD wants a spell in opposition to rebuild after its worst election result since the 1930s.
Steinmeier, following the tradition of all previous German presidents, gave up his party membership upon taking office. But he could wield some influence with top SPD players after years of holding leadership roles. His first months as president were lacklustre, with some commentators sceptical that the veteran political operator could emulate the success of his predecessor Joachim Gauck, a former East German pastor, in serving as Germany's moral compass.
But last month Steinmeier delivered a powerful address on the anniversary of German reunification and then went to Russia to try to repair strained ties with President Vladimir Putin - the first German head of state to visit Moscow since 2010.
A carpenter's son from the west German state of North-Rhine Westphalia, Steinmeier is a long-time confidante of former chancellor Gerhard Schroeder. Steinmeier failed to win election as chancellor in 2009, but later won plaudits from the German public for donating a kidney to his seriously ill wife.
He has a long experience of working with Merkel after serving as foreign minister in the first 'grand coalition' between the SPD and conservatives in 2005-09 and then resuming that role in 2013-17, when the two parties got hitched again.
He and Merkel worked closely together on the Minsk peace agreement aimed at ending fighting in eastern Ukraine - a complex deal that required hours of negotiations with Putin and Ukrainian leaders.
"I thought Minsk was his biggest accomplishment, but it may pale in comparison with the effort involved in building a functioning government in his own country," said Olaf Boehnke of the Rasmussen Global consultancy.
"Merkel and Steinmeier actually have a good working relationship. And now he's in the driver's seat," Boehnke said.