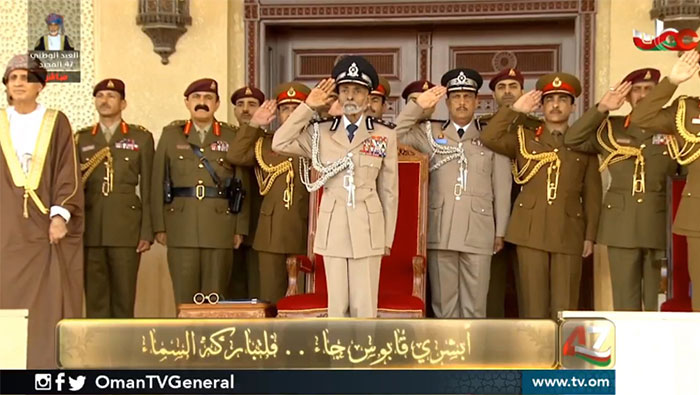 Muscat: His Majesty Sultan Qaboos bin Said, the Supreme Commander, presided over the military parade on Saturday evening. Organised by Royal Oman Police (ROP), the parade was staged at the military parade ground at the headquarters of the Police Special Force (PSF) in the wilayat of Seeb in the Governorate of Muscat.
Check out more photos here
Accompanied by a group of motorbikes, His Majesty Sultan Qaboos bin Said, the Supreme Commander received a guard of honour from the military on arriving at the gate of the Police Special Force. The royal motorcade then headed to the military parade ground surrounded by a number of ROP horse riders.
HM the Sultan was received by Gen. Sultan bin Mohammed Al Nu'amani, Minister of the Royal Office, Sayyid Badr bin Saud bin Harib Al Busaidi, Minister Responsible for Defence Affairs and Lt.Gen Hassan bin Mohsen Al Shraiqi, Inspector-General of Police and Customs.
Upon His Majesty's ascension to the Royal Dais, the parade columns gave the military salute; the Royal Anthem was played by the joint military parade band while the artillery fired a twenty-one-gun salute to His Majesty.
Afterwards, the joint military bands staged a music performance while passing before the main dais until they stood at their places behind the columns of the protocols guard.
Afterwards, the columns of the Protocols Guard staged a performance in regular columns to the rhythms of musical beats.
Later, the columns of the Protocols Guard chanted ROP song ' Homat Al Haq' then the call of loyalty and allegiance and also proclaimed thrice long live His Majesty Sultan Qaboos bin Said, the Supreme Commander.
Then, the Royal Anthem was played and the columns of the Protocols Guard gave the military salute to His Majesty the Sultan signalling the conclusion of the military parade.
At the conclusion of the parade ceremony, His Majesty Sultan Qaboos bin Said received a commemorative gift from Royal Oman Police which was presented by Lt.Gen Hassan bin Mohsen Al Shraiqi.
His Majesty the Sultan was accompanied during the parade by their highnesses, the chairmen of the State Council and Majlis Al Shura, their exellencies the ministers, advisers, Dr. Abdulatif bin Rashid Al Zayani, Secretary General of the GCC, commanders of SAF, ROP and the military and security apparatuses.
The parade was also attended by honourable members of the State Council and members of Majlis Al Shura, the undersecretaries, the governors, judges of the Governorate of Muscat, heads of diplomatic missions of friendly countries accredited to the Sultanate, military attaches, walis of the Governorate of Muscat, senior state officials, senior officers, non-commissioned officers, SAF, RGO, ROP and security personnel and dignitaries of the Governorate of Muscat.