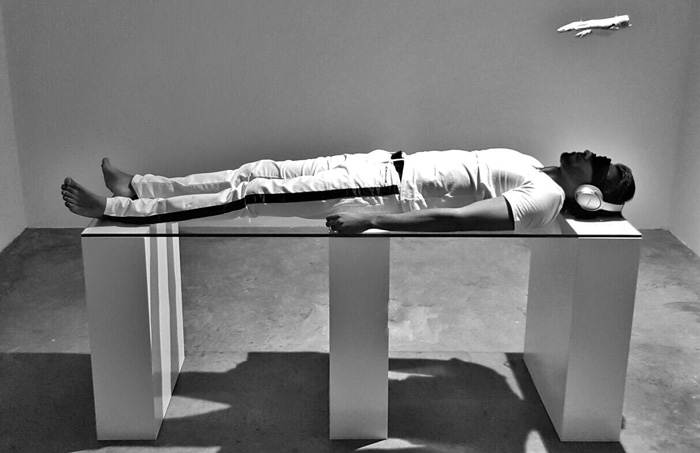 "Performance art is real and not theatre; it allows your body to be in the moment and to express itself in the present day. It can’t be rehearsed, edited, or repeated,” noted Ahmed Al Mullahi, Omani’s only contemporary performance artist. Ahmed was born in London but he returned to Oman after he finished his high school. He is known for his spiritual video installations and performances that take the form of moving art, with an emphasis on spirituality and religion, as well as re-creating inspiring stories from the past. After taking art classes in France, Ahmed realised that performance art is the medium that captures his interest the most, so he met artists and performers who inspired him in shaping his art. Though he has an interior design background, his spiritual entities and human behaviour are his two love.
Ahmed began his journey of art in the hope of better understanding himself. Today, his journey continues to raise awareness about performance art and the way of thinking in the Sultanate.
Ahmed became fascinated by human behaviour, which he studied and researched intensively. He discovered powerful entities within humans, focussing on divine consciousness. After studying in his art field, he decided to begin experimenting with moving visuals and performances, which combined two of the most important elements in his craft: Art and religion, as he created stories that sought to touch the hearts of those watching.
Ahmed enjoys recording his videos and experimenting with his art. “I like to document my life. One day I’ll be gone, but this is what will remain to inspire others,” said Ahmed, adding, “Maybe I have not yet spoken to little children, but my work can speak to them later.”
To Ahmed, this art form is a great way to raise awareness, as most of his performances use real emotions and real bodies, which can touch hearts and successfully deliver messages. Within Ahmed, himself, spiritual messages that sometimes touch social issues and various interpretations can be found, and when it comes to filming style, he’s an advocate for minimalism, which reflect his interior design, aesthetics, and experience. Performance art will forever be Ahmed’s favourite art form, and it has taught him a number of important things, including organisational and observing skills. To the artist, this medium is a powerful way to lead to self-development and living a purposeful life.
—[email protected]