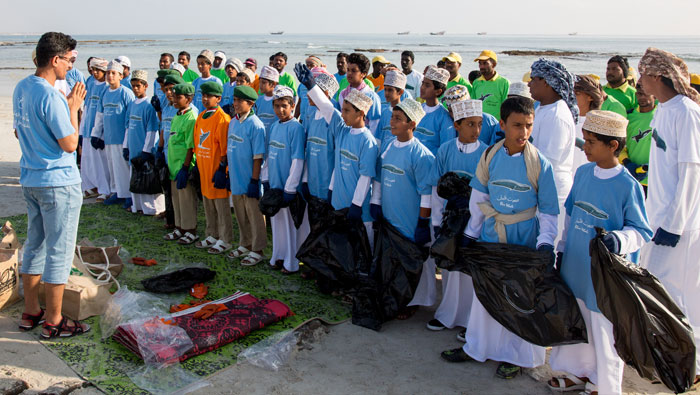 Muscat: As part of its longstanding efforts to educate the general public on the importance of protecting endangered whales, the Environment Society of Oman (ESO) concluded its awareness campaign in the Governorate of Al Wusta.
The initiative is being sponsored by Renaissance Services and included delivered school lectures, beach clean-ups, and a series of presentations throughout the Wilayats of Al Hima, Mahoot and Ad Duqm.
True to its ethos of reaching out to reach every corner of the Sultanate, volunteers from the society in collaboration with multiple stakeholders supported each leg of the campaign in addition to tagging expeditions to help researchers learn more about the Arabian Sea Humpback Whales.

The campaign highlighted the importance of preserving Oman’s biodiverse environment, offering attendees in schools and Omani Women’s Association branches general information on sustainability and its impact on marine wildlife.
Students and other participants learned first-hand about the unique and endangered Arabian Sea Humpback Whale population, their migration patterns in the region and how reducing pollution can substantially contribute to their conservation.

Dr. Hamed Al Gheilani, Community Outreach Manager at ESO, said, “Our annual series of awareness campaigns has helped provide thousands of local communities with information on the principles of environmental consciousness and how they can make a positive impact around them.
For years, the whales and dolphins of the Sultanate have called our shores and coasts home, but today they are threatened by a combination of factors. Thankfully, this can be changed if we prioritize the needs of the environment and remain diligent stewards of Oman’s biodiversity.”

The landmark event was organized in collaboration with the Ministry of Environment and Climate Affairs, the Ministry of Agriculture and Fisheries, Ministry of Education, the Special Economic Zone Authority at Duqm (SEZAD), Wali’s Offices, local municipalities, Women’s Association, the Oman Environmental Services Holding Company, Renaissance Services as well as local communities. Volunteers from participating organizations pitched in to support ESO, including 400 SEZAD employees and schoolchildren participating in two beach clean-ups in Khaluf and Sarab.

The ESO was founded with the objective of taking environmental conservation in Oman to the next level. Since its foundation in 2004, the society has created numerous campaigns and initiatives to spread the importance of biodiversity and educate residents on how best to preserve the Sultanate’s natural wonders.