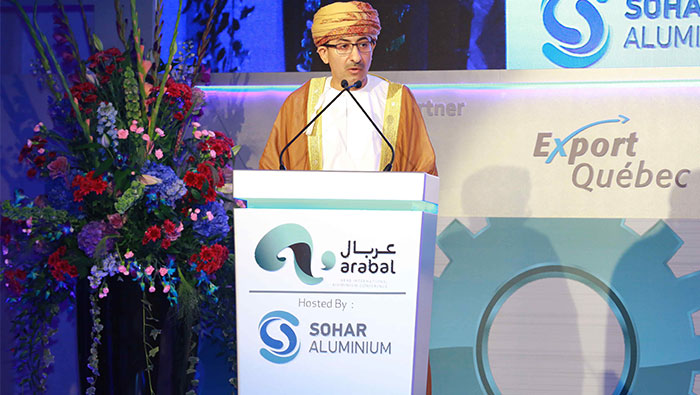 Muscat: Delegates from across the globe attended the opening day of the 2017 Arab International Aluminium Conference (Arabal), a forum for growing the country’s aluminium industry.
The event is being held at the Shangri-La Barr Al Jissah Resort & Spa, Muscat, from November 6 to 9. Arabal 2017 will feature 12 sessions, each dedicated to a subject of vital significance to the global industry. The detailed programme agenda set out for the three-day event includes panel discussions, case studies and research papers presented by 66 speakers, comprising leading executives and experts from a cross-section of industries, offering insights into the sustainable growth of the region’s aluminium industry as well as the challenges and opportunities faced by the industry.
Some 550 delegates from 35 countries have registered to participate in Arabal 2017 – a testament to its reputation as a showcase of the region’s rapidly evolving aluminium smelting prowess. The event’s reception further highlights Sohar Aluminium’s emergence as a leader in industry-related expertise.
Under the auspices of His Highness Sayyid Harib bin Thuwaini Al Said, Assistant Secretary General of the Council of Ministers for Conferences, Sohar Aluminium kicked off the event. After the official inauguration by HH Sayyid Harib bin Thuwaini Al Said, a series of remarks by high-profile attendees was made.
H.H. Sayyid Kamil bin Fahd bin Mahmoud Al Said, Assistant Secretary General for the Cabinet of the Deputy Prime Minister for the Council of Ministers, delivered the event’s keynote address, focusing on the role the aluminium industry will play in the Sultanate’s ongoing diversification efforts.
His Highness Sayyid Kamil bin Fahd bin Mahmoud Al Said said, “While Oman’s many natural resources have been harnessed with considerable success, we need vision to unlock their full potential. This is something Oman has been able to achieve within the global aluminium sector since its emergence as a player only a few years ago. Locally, the industry has boosted job opportunities and created a valuable knowledge base regionally and internationally, which has contributed significantly in raising Oman’s profile.”
Kicking off the event was Mohammad Al Naki, the Founder and Chairman of the Arab International Aluminium Conference, who stated, “On a similar note, I would like to thank Sohar Aluminium, represented by Mr. Mulham Al-Jurf, the Chairman, and Sohar Aluminium’s CEO, Eng. Said Al Masoudi, for hosting this year’s edition of Arabal.”
As the host of this year’s edition, Said Al Masoudi took the stage next to welcome all stakeholders to Oman, noting,
“While, like any industry, we have our fair share of challenges, including rapidly changing market prices and a changing surplus within the market, today is the ideal opportunity to discover the most sustainable way forward.”
Al Masoudi added, “Our incredible story has been achieved thanks to the hard work of Sohar Aluminium’s biggest equity, our people, who continuously deliver excellence in translating our vision to reality. It goes without saying that by far the most important milestone we have accomplished is in nurturing and retaining a team of highly qualified experts.”
The schedule for the first two days of the conference is filled with presentations and discussion panels, while Day 3 features a site tour of Sohar Aluminium’s facilities. Inaugurated alongside the conference was the Arabal 2017 Exhibition, featuring a prestigious line-up of 43 companies, which include the world’s leading product and service providers for the aluminium industry, local downstream companies, all the primary aluminium smelters in the GCC and the Middle East and a large delegation from the Quebec aluminium sector, led by Canada’s and Quebec’s Export Development Agencies.
Day 1 also saw the Arab International Aluminium Conference Appreciation Memento, recognizing the efforts of last year’s host of Arabal in Dubai, Emirates Global Aluminium. The Gulf Aluminium Council then introduced the very first Community Service Award, the most prestigious award for outstanding contributions to the local community in recognition of companies that acknowledge their social, cultural and environmental responsibilities to the communities in which they operate. The Community Award was then presented to Sohar Aluminium.
Making their debut on the programme’s schedule were themes such as the potential use of renewable energy sources, warehousing and innovative aluminium. In another Arabal first, representatives from some of the world’s pre-eminent institutions and related stakeholders participated in a panel discussion on the global economic outlook for metal commodities. The panel comprised representatives from the London Metal Exchange (LME), Thomson Reuters, Bank of China International and Harbour Aluminium.
Joining the long list of carefully crafted sessions was the presentation of a detailed research study on the implications of contemporary gas in the regional aluminium industry by Professor Paul Stevens, a Distinguished Fellow from Chatham House. Another presentation was given by LME on warehouses and storage facilities around the world for metal products.
Rounding out the first day was a high-impact panel covering the effects of tariffs in the Arabian Gulf, trade barriers, industrial opportunities and market trends in the fight for global market share.
The proceedings of Day 1 concluded with a cultural dinner. This event was held in one of Oman’s most scenic locations. The dinner menu introduced the guests to the local traditional cuisine, presented in a contemporary way. The highlights of the event included a performance by world-renowned composer and musician Toufic Farroukh, with a band of 11 musicians, whose music represents a fusion of the best of the Orient and the Occident and embodies the harmony between Western and Middle Eastern culture in art. Day 2 promises to bring even greater insights into all topics under discussion.