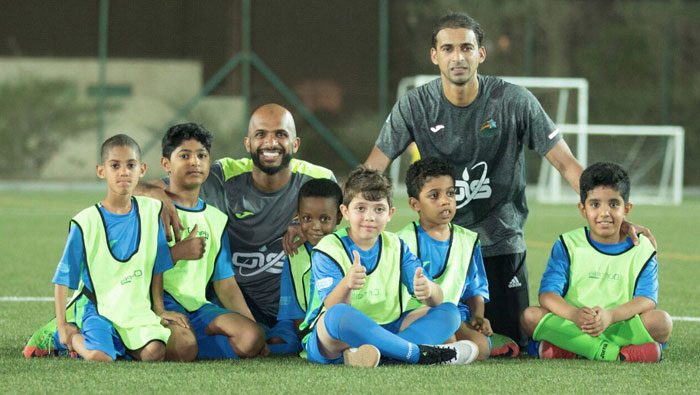 Muscat: Oman’s next generation of footballers at the Al Habsi Football School were given a once-in-a-lifetime training session by none other than one of the national team’s top goalscorers.

Emad Al Hosni – who scored 37 goals for Oman’s national football team – paid a visit to legendary goalkeeper Ali Al Habsi’s football academy in Muscat, and both footballers were happy to have shared such an experience with the young players on the pitch.

“We cherished those moments when the leader Ali Al Habsi and leader Emad Al Hosni were with us, and we were so happy and inspired by the passion and direction they showed,” said the Al Habsi Football School in a tweet, which was later retweeted by Al Habsi.

“During my visit to the soccer school last night, it was very nice and it felt very good to be with the players,” added Emad Al Hosni, who tweeted from his official Twitter account.

Al Hosni was very closely involved in honing the players’ dribbling, finishing and shooting skills, and these are surely lessons that will live long in their memories.

Although he does not have the same universal following as Ali Al Habsi, 33-year-old Al Hosni has something of a cult following in Oman. He is one of Oman’s top scorers after former striker Hani Al Dhabit, who holds the record for the nation’s leading goalscorer with 42 goals to his name.

In addition, Al Hosni, like Al Habsi, is one of the few Middle Eastern players to have previously plied his trade in Europe, having featured for Sporting Charleroi in Belgium during the 2009-10 season.

Known for this athleticism, prowess in the air and on the ground, and eye for a goal, Al Hosni, who is currently on the books of Fanja SC, also featured for Saudi Arabian giants Al Ahli, Al Riyadh and Al Nasr, in addition to spells at Qatari outfits Al Rayyan and Qatar SC, and a stint at Omani club Saham, who are one of the up-and-coming names on the Oman football scene.