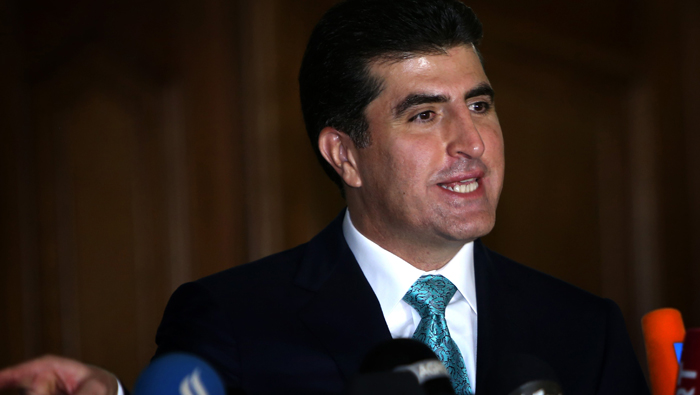 Erbil: Iraqi Kurdish President Masoud Barzani departed office on Wednesday, leaving his nephew to reconcile with the central government in Baghdad, with regional neighbours and with rival Kurdish parties after a failed referendum on independence.
Nechirvan Barzani, who has served alongside his uncle as prime minister, will now be the main authority figure in the executive of the Kurdish autonomous region, following Masoud Barzani's departure as president, Kurdish officials said. "The prime minister will be the key person during this transitional period," said Hoshyar Zebari, a former Iraqi foreign minister, now advisor to the Kurdish government and senior member of the ruling Kurdistan Democratic Party (KDP).
The elder Barzani, a 71-year-old veteran guerrilla leader, had run the Kurdish autonomous region with a firm hand since 2005, during which it prospered while the rest of Iraq was mired in civil war.
But he announced his resignation on Sunday, effective on November 1, after a Septrmber 25 referendum on independence backfired, prompting the central government to send troops to recapture territory held by the Kurds outside their autonomous region.
The referendum and government backlash have also revealed deep divisions among the Kurds themselves.
During his resignation speech, Masoud Barzani accused his political rivals of "high treason" for yielding territory without a fight.
His nephew Nechirvan, 51, who has served as prime minister for all but three years since 2006, is seen in Kurdish politics as a less polarising figure, having warmer relations than his uncle with rival Kurdish parties.
He also has a close working relationship with Turkey's President Tayyip Erdogan, who has backed Baghdad in the central government's dispute with the Kurds since the referendum.
The Kurdish regional parliament voted on Sunday to divide the president's powers among parliament, the judiciary and the cabinet, until parliamentary and presidential elections are next held.
The elections were originally scheduled for November 1 but postponed last month until next year.
Before the referendum, Barzani’s son Masrour was seen as his likely successor, but he has been damaged by his backing of the secession vote, which soured relationships with Baghdad and regional powers who opposed it.
On Monday, the United States commended Masoud Barzani for stepping down and said it would actively engage with Nechirvan Barzani and his deputy, Qubad Talabani, a member of the rival political faction with whom he maintains a good relationship.
UK Foreign Secretary Boris Johnson also spoke with Nechirvan Barzani on Monday to encourage dialogue with Baghdad.
He also met with met with the French and Germany ambassadors to Iraq, Bruno Aubert and Cyrill Nunn, on Tuesday.
As prime minister, Nechirvan Barzani has been central to brokering the semi-autonomous region's oil dealings, now in jeopardy following Iraq's recapture of disputed territories on October 16, including the oil-rich city of Kirkuk.
Despite no longer being president, Masoud Barzani will not be retreating from public life, government officials said.
In his televised address on Sunday announcing the end of his presidency, Barzani said that he would remain a Peshmerga, or Kurdish fighter, and will continue to battle for his people's lifelong dream of independence.
He will also remain head of the ruling party and will still sit on the High Political Council, a non-governmental body which emerged after the referendum.
Kurdish politics have been dominated for decades by the KDP, led by three generations of the Barzani family, and its main rivals the Patriotic Union of Kurdistan (PUK), led by the family of Jalal Talabani, who died in October.
The two parties fought a civil war against each other in the 1990s, but maintained an outward appearance of unity after the fall of Saddam Hussein in 2003, with Jalal Talabani serving as Iraq's ceremonial president in Baghdad from 2005-2014 while Masoud Barzani ran the Kurdish autonomous region.