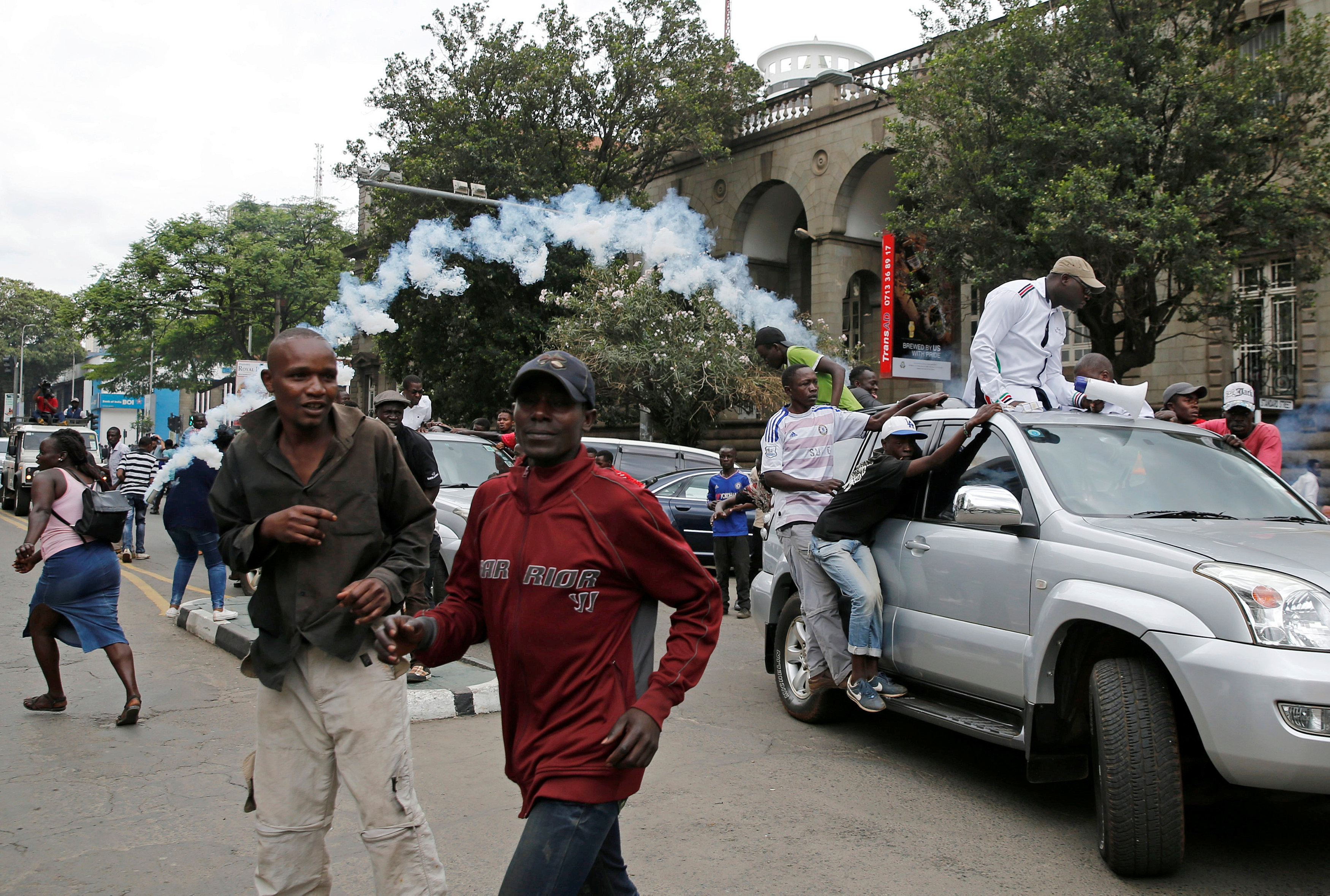 Nairobi: Kenyan police used bullets and teargas on Tuesday to disperse a small demonstration in Nairobi two days before elections, as the main opposition leader appeared to row back from a call for his supporters to hold protests during the vote.
In the western city of Kisumu, around 2,000 demonstrators marched on the election board offices, witnesses said, responding to Raila Odinga's appeal for protests against Thursday's repeat presidential ballot. They dispersed peacefully.
Odinga is boycotting the contest against incumbent Uhuru Kenyatta. He says it will not be free and fair because the election board has not made sufficient progress in carrying out reforms he demanded after the original election held in August was annulled.
Odinga had urged his supporters to ensure Thursday's vote did not take place, repeatedly saying there would be "no elections".
But on Tuesday he told the BBC he was not calling for protests on polling day itself. "We have not told people to protest on polling day. We have not said that at all. We have told people to stay away," he said in a radio interview.
When called for clarification, Odinga's spokesman said he was saying "peaceful protests" would still take place and that the opposition would fully explain their plans on Wednesday.
The country's Supreme Court is still hearing several cases challenging the legality of Thursday's poll or Odinga's withdrawal.
At least 49 people have died in political violence since the August ballot, evoking unwelcome memories of the aftermath of a disputed 2007 poll, when more than 1,200 people were killed.
The political stand-off has also blunted growth in East Africa's richest economy, a nation valued for its stability and relative freedom in a region roiled by conflict.
Last week Odinga supporters disrupted at least three official pre-polling events. Police said some election board staff were seriously injured.
The head of the election board said last week it was not clear a free and fair poll could take place due to intimidation and political interference.
His comments followed the resignation of an election commissioner, who fled the country and released a statement saying she had been threatened, although she did not say who had done so.
A day before the August 8 poll, another member of the election board had been found tortured and murdered.
On Monday, the International Crisis Group, a global thinktank, called for a delay in the election, saying "proceeding under current conditions would deepen Kenya’s ethnic cleavages and prolong a stalemate that has already claimed dozens of lives and come at a high economic cost."
Both the election board and the government have said the vote will go ahead, irrespective of whether Odinga contests it, and only a court ruling could legally delay the re-run ballot beyond the end of October.
On Tuesday, police fired tear gas and bullets into the air to disperse protesters in the capital Nairobi.
In Kisumu, an Odinga stronghold, demonstrators said that the polls should not take place, but were unclear on how they should be stopped.
"All we know is that there will be no elections. As to how this will be done, we are waiting for the big announcement by Baba (Odinga) tomorrow," said one demonstrator, market trader James Ouma.
Around him protesters waved branches and blew whistles as they marched.
Kenyatta officially won the first election, on August 8, by 1.4 million votes, but the Supreme Court annulled that vote on September 1 over procedural irregularities.
After the Supreme Court ruling, Odinga's team presented a list of demands to the election board.
Some have been met - opposition monitors will now have access to the board's computers as results come in, a key official has gone on an extended holiday, and results will not be transmitted without a copy of a paper form from tallying centres.
The board said it was impossible to meet other demands - such as changing the technology provider - in the short time frame allotted for new elections.
The Kenyan constitution said fresh elections must be held within 60 days of nullified ones.