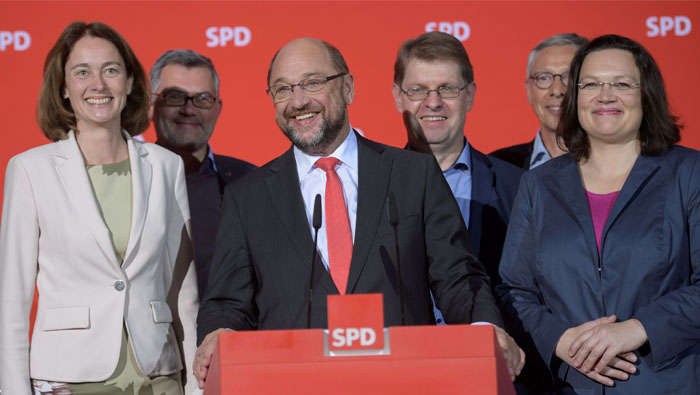 Berlin: Germany's Social Democrats (SPD) defeated Angela Merkel's conservatives in a vote in the northern state of Lower Saxony on Sunday in a setback to the chancellor as she prepares for tricky three-way coalition talks at the national level this week.
The SPD, which has governed the swing state home to carmaker Volkswagen with the Greens for four years, won 37.5 per cent, well up from 32.6 per cent in the last election there in 2013, according to an exit poll from infratest dimap.
The exit poll from the rich agricultural state with around six million eligible voters showed Merkel's Christian Democrats (CDU) took 35 per cent of the vote, down from 36 per cent in the last election there in 2013.
Disgruntled with Merkel's liberal migrant policy, Germans abandoned her party in droves in September's national election to hand the conservatives their worst result since 1949.
If confirmed, Sunday's result would be the poorest showing for the CDU in Lower Saxony in 58 years, further weakening Merkel as she tries to piece together an awkward alliance with the pro-business Free Democrats (FDP) and environmentalist Greens.
Those parties will this week begin discussions about entering a marriage of convenience untested at the federal level that could drag into 2018. Simon Fink, political scientist at the University of Goettingen, said no one had dared to start coalition negotiations in Berlin ahead of the election in Lower Saxony, which is slightly bigger than the Netherlands.
"Everyone was scared that if they did something at the national level or committed themselves to something, then their colleagues in Lower Saxony could end up suffering," he said.
The exit poll showed the environmentalist Greens, currently junior coalition partner to the SPD in Lower Saxony, won 8.5 per cent.
The liberal Free Democrats (FDP) won 7 per cent and the far-right Alternative for Germany (AfD) cleared the 5-per cent threshold to enter parliament with 5.5 per cent.
Merkel's reverse in September, along with the SPD's insistence on going into opposition, left her with no viable option other than a "Jamaica" coalition, so named because the three parties' colours correspond with the black, yellow and green of Jamaica's flag.
It means the prospective partners will need to overcome yawning differences on issues ranging from immigration to European Union reform, tax and environmental protection.
Cem Ozdemir, co-leader of the Greens, said the three parties had not sought each other out but now had a responsibility to form a coalition that bore the hallmarks of their conservative, liberal and centre-left identities.
"If the coalition comes off, it must not be a coalition that only agrees on the lowest common denominator. That won't work," he told Welt am Sonntag newspaper, adding that the trio needed a "shared narrative".
A deal brokered last weekend between Merkel's CDU and its conservative Bavarian sister party, the CSU, to cap the number of immigrants is likely to be hard for the Greens to swallow.
Merkel has acknowledged the difficulties ahead but added that "unusual combinations can of course bring the opportunity to find some solutions to things that had seemed unsolvable until now". "So now we need to put our noses to the grindstone," she said on the campaign trail in Lower Saxony on Thursday.
An SPD-Green coalition has ruled the state for four years, but lost its majority when a Greens lawmaker defected to the CDU, triggering a snap election.
The SPD's incumbent state premier, Stephan Weil, a 58-year-old former judge, fared better in the personal popularity stakes than his CDU rival Bernd Althusmann, a 50-year-old former army officer.
Sunday's win was the first victory for the SPD under Martin Schulz, who was nominated as its leader in January and suffered three state election losses earlier this year and the SPD's worst result in the post-war era in September's election.