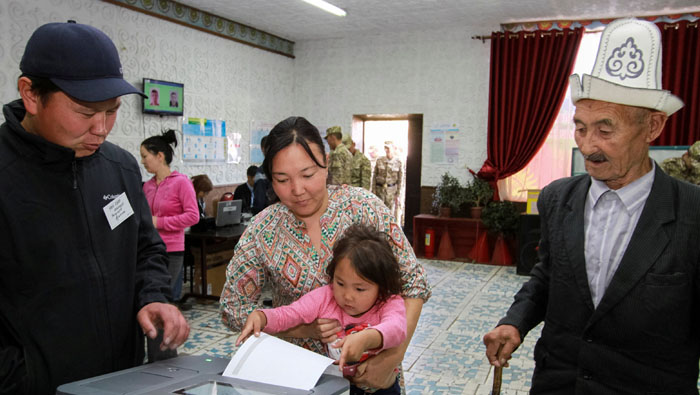 Bishkek: Kyrgyzstan voted on Sunday in a presidential election with observers predicting no outright winner and a close runoff between two pro-Russian candidates, one of whom is backed by the outgoing leader.
The mainly Muslim Central Asian nation of 6 million people has a history of violent protest, and the main opposition candidate, oil tycoon Omurbek Babanov, has accused the government of attacking his supporters and campaign staff. President Almazbek Atambayev - likely to remain a powerful figure if his preferred candidate Sooronbai Jeenbekov wins - warned on Sunday he would use any violence as an opportunity to "cleanse" the country.
Kyrgyzstan is a close ally of Moscow and hosts a Russian military base, helping its former Soviet overlord project power across the region where China and the United States also vie for influence.
In contrast to neighbours, mostly run by autocrats, Kyrgyzstan is a boisterous democracy that produces sometimes chaotic changes of leadership.
After its first two presidents were ousted by riots, the country restyled itself as a parliamentary republic where presidential powers are mostly limited to foreign policy and security matters. But Atambayev strengthened executive powers last year.
Also, alliances between parliamentary factions have been fluid, meaning a new leader could easily build a coalition around himself. Constitutionally barred from seeking a second six-year term, Atambayev is backing Jeenbekov, 58, a former prime minister.
Atambayev and Jeenbekov's Social Democratic party is the biggest in parliament and dominates the coalition cabinet.
But they face stiff opposition from Babanov, 47, whose Respublika-Ata Zhurt (Fatherland) party has the second-biggest parliamentary faction and whose poll numbers suggest he and Jeenbekov will compete in a tight runoff.
Babanov, also a former prime minister, has accused the government of abusing its powers to ensure Jeenbekov's victory after the authorities charged some of his campaign supporters with plotting a coup and planning to bribe voters.
Babanov has denied any wrongdoing and dismissed the charges against his supporters as dirty election tactics.
Atambayev and his cabinet have also accused Kazakhstan, a bigger and wealthier neighbour, of backing Babanov - which both Babanov and the Kazakh government deny.
"What they (the authorities) are doing is outrageous," Babanov told reporters on Sunday, adding some of his campaign staff and a reporter for a TV station owned by Babanov had been attacked by unidentified men on the day of the vote.
One of Babanov's supporters, Fatima Akchokoyeva, a 25-year-old kindergarten teacher, said: "He is young and ambitious, I think he will be able to change Kyrgyzstan for the better."
Jeenbekov's backers, on the other hand, see him as a safe pair of hands.
"I think he will be able to maintain stability. Stability is all we need," said district government employee Saltanat Temirova, 58.
Despite their differences, both Jeenbekov and Babanov consider Russia - where hundreds of thousands of Kyrgyz migrant labourers work - a strategic partner.
Less then a quarter of the three million registered voters had voted by 1400 local time.
Polls close at 8 p.m. (1400 GMT) and preliminary results may be published a few hours later.
There is no set date for a second round, which takes place in the event that none of the 13 candidates wins more than 50 percent of the vote. Atambayev on Sunday warned opponents against trying to stage violent protests after the vote.
"In fact, if there is unrest, it's going to be a good thing, I would like to cleanse (the country of) them all completely," he told reporters after casting his ballot.