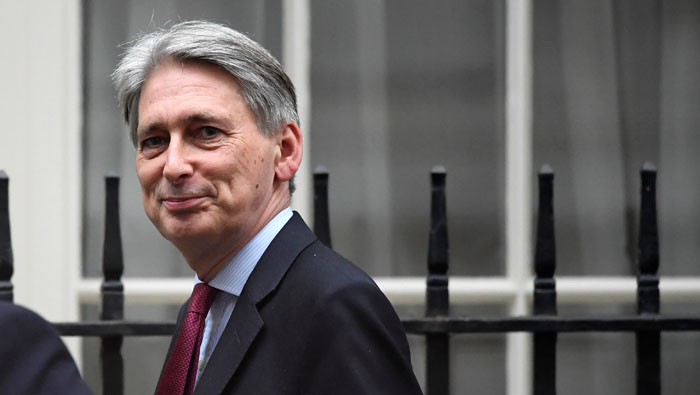 London: Britain's finance minister Philip Hammond on Sunday faced mounting questions over his future weeks ahead of a budget announcement, finding himself at the centre of an increasingly fraught debate over Britain's departure from the European Union.
The EU last week declared a "disturbing deadlock" in talks with Prime Minister Theresa May's government on arrangements to leave the bloc, raising the chances of Britain quitting without a negotiated deal and increasing criticism of the government's handling of Brexit.
On Sunday an unnamed source from the Democratic Unionist Party (DUP) said May must warn Hammond he faces the sack unless he changes his approach to Brexit, the Sunday Telegraph reported.
The DUP is a small Northern Irish political party which is keeping May's minority government in power.
"We are very concerned about Philip Hammond's behaviour," the senior parliamentary DUP source told the newspaper.
"It is evident to us that he is winding people up and causing unnecessary division within the Conservative Party at a crucial time in the Brexit negotiations."
A DUP spokesman later said the party did not recognise the "inaccurate" comments.
Hammond, 61, who is seen by many as May's most pro-EU minister, has become a focal point of criticism for Brexiteers, who say he is overly pessimistic about the impact of leaving the bloc and is damaging Britain's negotiating stance.
Last week Hammond warned that Brexit was causing a "cloud of uncertainty" over the British economy that needed to be cleared as quickly as possible.
He has previously angered eurosceptics by calling for a lengthy transition out of the EU, during which there will be little change to rules on issues like immigration.
In a botched attempt on Friday to calm speculation over his future and play down the party's divisions Hammond described the EU as the "enemy" in negotiations.
He later said he regretted his choice of words.
He had been expected to lose his job if May had won an increased majority at a June snap election, but the vote instead saw the Conservatives lose their majority and Hammond retain his position as May fought to maintain unity between pro-EU and pro-Brexit factions. The June election also transformed the DUP, which only has 10 lawmakers in the 650-seat parliament, into an influential voice.
May struck a deal with the party and is reliant on their support to pass legislation.
The delicate parliamentary arithmetic also means May faces criticism from lawmakers, including several from within her own party, who disagree with May's threat to walk away from EU negotiations without a deal unless Brussels agrees fair terms.
The opposition Labour Party's finance policy chief warned on Sunday that with the support on rebels from May's party, parliament would block any attempt to leave the EU without a negotiated agreement.
Questions over the future of one of May's most senior ministers come as he is due to present a budget plan on November 22 which will see Britain through one of its most uncertain periods in decades, amid growing business concern and voter unrest.
The Sunday Times reported that Hammond was preparing a "revolutionary" budget that could see the government ditch its opposition to borrowing more to boost investment, and may include tax breaks for the young paid for by pensioners.
"The view has galvanised that this budget has got to be big, it’s got to be powerful, it’s got to be revolutionary. Saying it’s got to be brave is really understating it. People are very clear that this is basically the last chance,” the paper reported a senior government source as saying. Hammond has limited room to increase public spending without pushing up Britain's still high borrowing levels.
The country's budget forecasters have signalled they are about to turn more gloomy about growth forecasts, meaning less tax revenue to fund Hammond's war-chest to help the economy weather the process of leaving the EU in the coming years.
But he is already under pressure now to relax his grip on spending to counter the left-wing opposition Labour Party whose promises of more spending and higher taxes on the wealthy won over large numbers of voters in the June election.
At the same time, Hammond must not alarm investors who fund a budget shortfall which is expected to grow this year.
Their lending helps Britain plug one of the widest current account deficits among the world's leading economies.