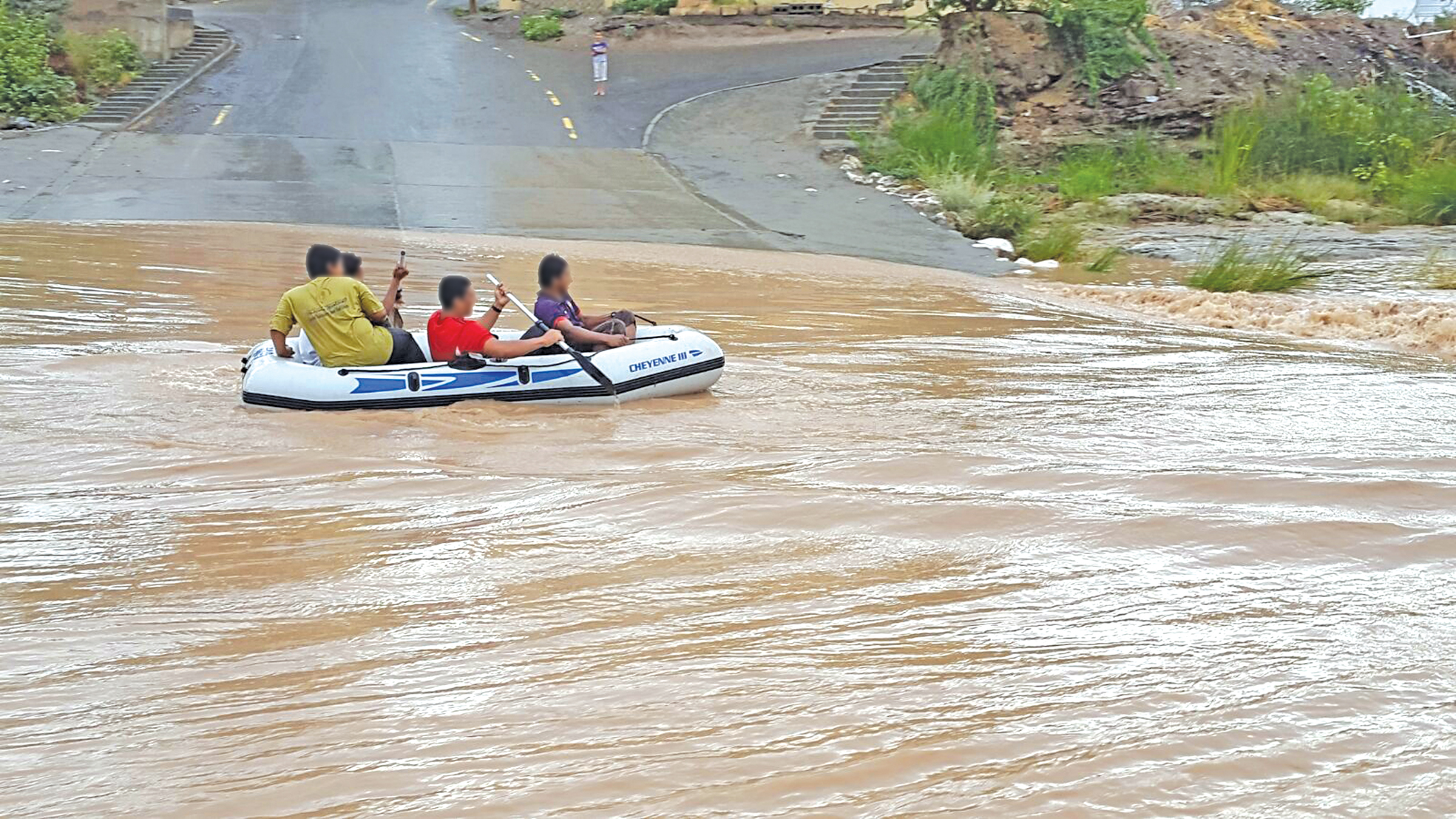 Muscat: Will they never learn? Laughing these youths paddle down an overflowing wadi, unaware of how strong the currents may be or the potentially fatal consequences of their foolhardy actions.
Live Blog: Heavy rain in many parts of Oman
Despite repeated warnings from authorities, this picture taken in Bahla reveals why lives are lost when it rains and why police and rescue teams are pressed into service time and again to save those in peril.
On Wednesday alone by 11am, Public Authority for Civil Defence and Ambulances (PACDA) head office received 90 distress calls and their rescue team had to carry out 60 rescue operations.
Read also: Many roads cut off in Batinah, Sharqiyah region
Distress calls
In a statement issued by Royal Oman Police (ROP), the officials said that they had also received 40 distress calls since Monday.
The rain, which started to hit northern parts of Oman since Sunday, has so far claimed three lives, two in Mudahibi and one in Rustaq.
In Mudhaibi, one person died after being struck by lightning and one drowned in an overflowing wadi.
Stay ahead of the rest and download our free WhatsNews app for Apple, Android or Blackberry
According to an official from PACDA, the majority of calls came from North Sharqiyah and South Batinah regions.
On Wednesday, police had to deploy helicopters to rescue people stranded in Al Dahirah region.
The PACDA official said sometimes rescuers are often left wondering how those in danger got to be in such dire straits.
“There were calls about people in distress in North Al Sharqiyah, Wadi Kabar in Al Falaj Area. The wadi was strong. When we reached there, it was quite impossible to reach out to stranded people. It always make us wonder how they got in and why?” the official said.
“Many incidents are not even reported to us. We come to know about it through social media networks. The situation is precarious and I am honestly confused. Why are they still treading dangerous wadis? Do they not know the punishment they could face?” the official added.
The official added that those who survive from danger will face legal actions for risking their lives and the lives of others by crossing wadis.
“Threatening one’s life as well as the lives of others is considered a crime according to the Omani Penal Code,” the official added.
In its latest alert, Public Authority for Civil Aviation (PACA) has advised people to take extra precautions during heavy rain, not to cross wadis, and to avoid sea activities.
PACA has predicted thundershowers, hailstorm and flash floods today and tomorrow in Muscat, Musandam, Al Buraimi, Al Dhahira, North and South Batinah, Al Dakhliyah, and North and South Sharqiyah.
In 2015, around 200 rescue operations were carried out by authorities during the rain in October and November and 14 have lost their life then.
According to Eric Leister, a meteorologist at Accuweather.com, a series of disturbances tracking across the Middle East is sparking heavy thunderstorms, threatening to bring flash flooding to Oman, the United Arab Emirates and Iran.
“Low pressure passing from UAE. to southeastern Iran on Wednesday will cause heavy rainfall. As a result, cities in northern Oman such as Muscat and Sohar will be at a high risk for flooding,” Eric added.