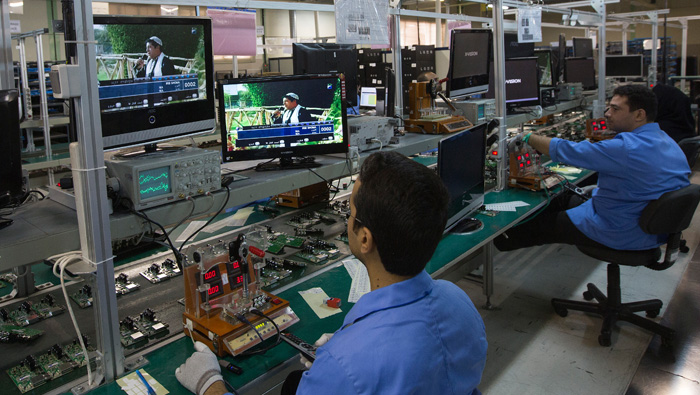 Tehran: Iran expects economic growth of more than 5 per cent in 2016, its central bank's governor said on Saturday, after emerging from years of isolation and crippling international sanctions over the country's nuclear programme.
The major oil producer's economy is still struggling and growth is close to zero but many investors are betting that restoring Iran's links with the world and attracting foreign capital and technology will trigger a long-term economic boom.
"Iran's economic growth slowed down in 2015 but domestic and international predictions both indicate that growth in 2016 would be beyond 5 per cent," central bank chief Valiollah Seif said.
In January world powers led by the United States and the European Union lifted sanctions on the country in return for curbs on its nuclear programme. The subsequent leap in Tehran's stock market in late January and early February gave a hint of the country's investment potential.
But President Hassan Rouhani said last month that his country needed 8 per cent economic growth in order to deal with inflation and unemployment, both of which stand above 10 per cent.
Energy Minister Hamid Chitchian said on Thursday Iran is implementing a development plan aiming for yearly growth of 8 percent although many private economists consider that over-optimistic.
European banks
Iran has complained that European banks and companies were too wary about renewing business ties following the lifting of economic sanctions and said it had asked the International Monetary Fund (IMF) to ease their concerns.
But some US sanctions remain, and US banks remain prohibited from doing business with Iran directly or indirectly because Washington still accuses Iran of ‘supporting terrorism.’ That has deterred European institutions, which fear they could face US legal problems if they re-establish banking links.
"We have asked the International Monetary Fund to review our regulations so other countries' banks feel reassured. The IMF will announce its assessment in 2018," he added, without explaining why it would take two years.
As part of sanctions relief, most of Iran's banks were reconnected to the SWIFT international payments network last month, allowing them to resume cross-border transactions with foreign banks. But because of foreign institutions' legal fears, actual activity has remained very limited.
Alex Thursby, chief executive of National Bank of Abu Dhabi, the emirate's biggest bank, said this week that in reality, no banks could conduct transactions with Iran in US dollars under current conditions.
That is a political as well as an economic headache for the administration of President Hassan Rouhani, since his conservative parliamentary critics have complained the nuclear deal is not delivering the expected benefits to Iran.
Deputy foreign minister Majid Takhteravanchi, a negotiator of the nuclear deal, also criticised the ‘cautious behaviour’ of European banks in resuming transactions with Iran. "There is no legal obstacle in the way of expansion of iran-Europe relations," IRNA quoted Takhteravanchi as telling European businessmen at a forum in Tehran on Saturday.
He also said the Iranian central bank was implementing new rules against money laundering and terrorism funding to facilitate ties with European banks. The central bank's governor, Valiollah Seif, told the forum that Iran's market was ripe for cooperation between Iranian and European banks.
"Transparency is the prerequisite of international transactions. Iran has taken primary steps to make the financial information of iranian banks as transparent as possible."