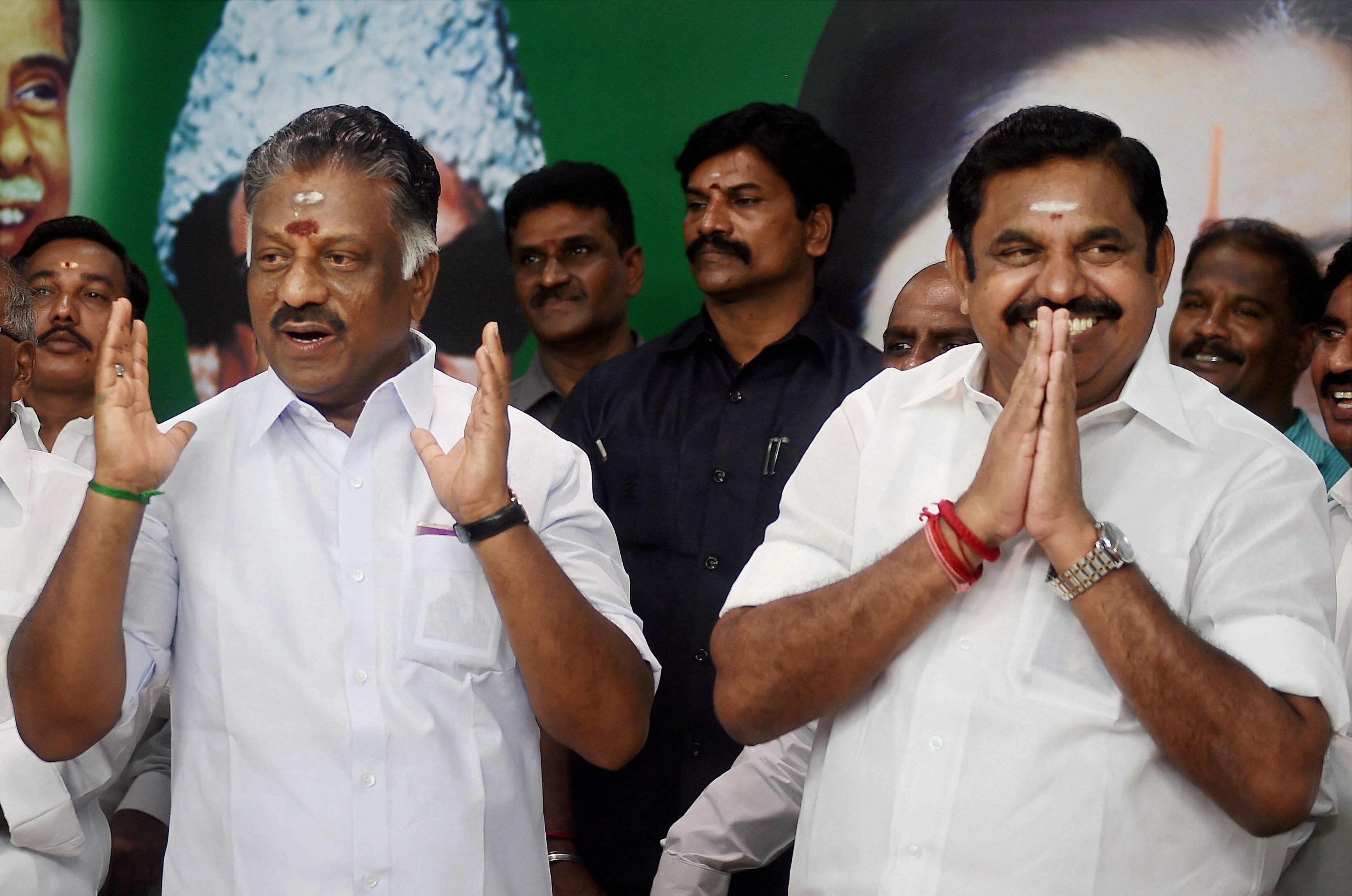 Chennai: Rival All India Anna Dravida Munnetra Kazhagam(AIADMK) factions led by Chief Minister K. Palaniswami and rebel leader O. Panneerselvam on Monday merged, ending a nearly seven-month feud in a power sharing formula in the ruling party and the government in which the latter was made the deputy chief minister.
As the merger brought to an end weeks of suspense during which there was tough negotiations, the two factions said steps would be taken to expel party chief V. K. Sasikala. But the Sasikala camp appeared to be in no mood to give up without a fight.
MLAs owing allegiance to sidelined party Deputy General Secretary and Sasikala's nephew T. T. V. Dhinakaran said they would meet Governor Ch Vidyasagar Rao on Tuesday.
Key Dhinakaran aide and legislator P. Vetrivel, however, did not say anything about the agenda of the meeting. Another MLA, Thanga Tamilselvan, questioned why Palaniswami was giving importance to Panneerselvam, "who has just nine MLAs" with him, and claimed that the Dhinakaran faction enjoyed the support of 25 MLAs.
The merger facilitated the return of Panneerselvam to the government as finance minister, isolating Dhinakaran, Sasikala's nephew, and his camp.
Calling each other 'Annan' (elder brother), both Palaniswami and Panneerselvam described the merger as "historic".
Palaniswami also announced that a 11-member steering committee will lead the party affairs and its members will be announced later.
Panneerselvam was sworn in as deputy chief minister and his close associate and former minister K. Pandiarajan as Culture Minister by Governor Rao at Raj Bhawan after the merger at the party headquarters here.
The former chief minister was allotted several portfolios including finance, a portfolio he has held before.
Prime Minister Narendra Modi congratulated Panneerselvam and assured all support to the Palaniswami government. "I congratulate Thiru O. Panneerselvam & others who took oath today. I hope Tamil Nadu scales newer heights of progress in the years to come," the prime minister tweeted. "Centre assures all possible support to CM Thiru Edappadi K. Palaniswami & Dy CM Thiru O. Panneerselvam for the growth of TN," he said in another tweet.
In a formula evolved to strike a balance in the party and the government, Panneerselvam agreed to be the deputy chief minister. In the party, Panneerselvam was made the 'coordinator' and the chief minister the 'co-coordinator.'
Vaithilingam of Palaniswami camp and K. P. Munusamy of Panneerselvam faction were named deputy coordinators. Palaniswami expressed confidence that the merged party would get back the 'Two-leaves' symbol that has been frozen by the Election Commission.
Palaniswami led the 'AIADMK Amma' faction while Panneerselvam headed the 'AIADMK Puratchi Thalaivi Amma' faction. After clearing the decks for the merger, Palaniswami arrived at the party office first and Panneerselvam followed suit. Both were given a rousing reception by party cadres who swarmed the party headquarters and lined the road leading to the party headquarters office.
Panneerselvam's visit to the party office was the first after almost seven months. He visited the party headquarters on February 5 for electing Sasikala as Leader of the Legislature Party. The rebel leader had earlier visited the office as chief minister before his revolt against Sasikala on February seven in the fight for legacy of AIADMK supremo J. Jayalalithaa who died on December 5 last year.
A smiling Palaniswami, who made the announcement of the rival factions burying their hatchet, and Panneerselvam shook hands signalling the merger. "Amma's Atma (soul) facilitated the merger of the two factions...the burden in my heart is gone,"said Panneerselvam. Amid applause, he said, "none can separate us, we are children of Amma (late Chief Minister Jayalalithaa), we are brothers."
Thanking the chief minister for his cooperation for a merger, Panneerselvam addressed him as "dear elder brother (Annan)." Terming the merger "historic", he said it would help take on the Opposition parties during future elections. Palaniswami lauded Panneerselvam for facilitating the merger and reciprocated by also addressing him as "Annan," amid jubilant scenes at the crowded ceremony.
"We have merged, the differences were ironed out through talks and unity brought back to strengthen our organisation. It is a historic event," the chief minister said. R Vaithilingam, a leader of the Palaniswami camp, said measures will be initiated to remove Sasikala as general secretary of the party. He said this will be done by convening the general council, a key demand of the Panneerselvam camp. "It has been assured that Sasikala will be removed as general secretary," said V. Maitreyan, a Rajya Sabha MP and a Panneerselvam loyalist.

The Dhinakaran faction put up a brave face and maintained the party cadres were with Sasikala. Party spokesperson and Dhinakaran loyalist C. R. Saraswathi asked what the reason was behind Sasikala being eased out and what wrong she had done to Panneerselvam or Palaniswami. "It is our desire that the party should be united." In the 234-member state assembly, Panneerselvam faction has nine MLAs, while Palaniswami faction has 122. The merger came days after Dhinakaran held a well-attended rally at Madurai in which he claimed the support of about 20 AIADMK legislators and six MPs who had participated in the event.
Around 17 MLAs reportedly met Dhinakaran at his residence here earlier in the day, raising questions about the stability of the AIADMK government. Munusamy said despite hurdles, both Panneerselvam and Palaniswami worked towards facilitating a merger.
Apparently hitting out at Dhinakaran, Palaniswami said amid thunderous applause, "Many dreamt of playing spoilsport, to come in between (us) and we dealt a body blow to them." Immediately after the merger, Palaniswami and Panneerselvam, accompanied by leaders of both factions, paid homage at the burial site of Jayalalithaa besides memorials of AIADMK founder M. G. Ramachandran and Dravidian ideologue C. N. Annadurai.