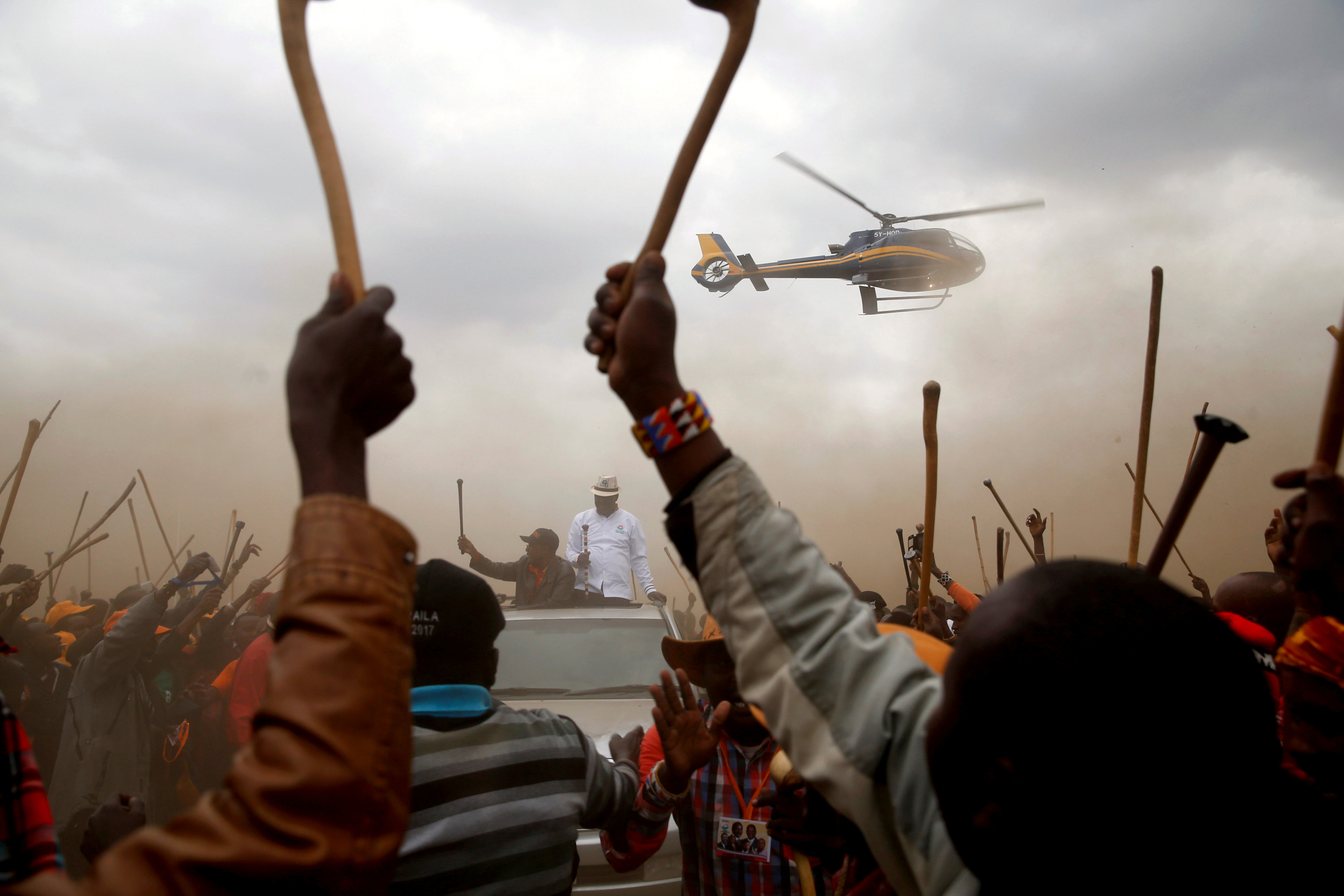 Kitui (Kenya): Kenya's president and opposition leader both held election rallies outside their ethnic strongholds this week, as the candidates push harder to win votes in areas dominated by their rivals.
Many Kenyans still vote along ethnic rather than policy lines, but President Uhuru Kenyatta and his chief opponent, Raila Odinga, have both signalled they are seeking support across the country's many communities.
"We do not move on tribal lines," Kenyatta told a cheering crowd in the eastern town of Kitui on Thursday. "It is my government's pledge to develop all parts of the country, regardless of region and tribe."
Kenyans will choose a new president, lawmakers and local representatives in the August 8 elections.
Odinga has lost the last two elections, which were both marred by problems. The 2013 polls were peaceful after he took his concerns to court, but in 2007 he called for demonstrations. More than 1,200 people were killed in protests and ethnic violence that followed.
Pollsters say the 2017 race is too close to call, and the murder of a top election official and Odinga's repeated accusations of rigging have raised fears that political protests could once again degenerate into ethnic violence.
Kenya has 44 official tribes and election candidates usually form alliances with politicians from other ethnic groups to broaden their appeal.
Odinga has built his National Super Alliance (NASA) with leaders from four groups, stitching together support from politicians from three other ethnic backgrounds.
Although Kenya remains dominated by tribal politics, reforms aimed at fostering ethnic inclusion are bringing some small, gradual changes.
Kenyatta has attended more than 500 rallies all over the country during this campaign, said Justin Muturi, the speaker of the national assembly. That's more than twice as many as last time, he said.
"The last elections made us realise we couldn't rely on our coalition partners to bring in the support (of their ethnic group). It cost us votes," he said. "This time the president is speaking in every corner of the country. That didn't happen in 2013."
That's why Kenyatta travelled to campaign in Kitui, an area he previously neglected, Muturi said. It is home to many Kamba people, the ethnic group of Odinga's deputy presidential candidate, Kalonzo Musyoka.
Some opposition supporters shouted at reporters as the president's rally ended in a blast of music: "We support NASA! Kalonzo is our brother! He is from here!"
Both candidates increased their efforts to win support across the nation after a new constitution passed in 2010. It stipulates that the presidential winner must get a quarter of the vote in at least 24 of the 47 counties, a measure designed to force powerful groups to build alliances with smaller tribes.
The constitution also devolved power and money to the counties, giving smaller communities more control over resources and the chance of representation. This has eased some regional resentments.
"Devolution is a reassuring safety valve," said John Githongo, a prominent anti-corruption campaigner.
A government body has helped to curb public hate speech, although it is still dogged by legal problems that mean convictions are rare.
Voters claim to be more tolerant, although some candidates have been heckled or had stones thrown at their convoys.
"People are learning that if you don't like a candidate, let them campaign and go their way," said Jonathan Kiloko, as he headed towards an Odinga rally in the Suswa area, currently a government stronghold. "You have your vote in your pocket and you will pick whoever you want on voting day."
Odinga said that attitude was more prevalent among younger voters. "The younger generation is uniting Kenyans," he said.
Still, ethnic voting patterns remain strong. Opinion polls show Kenyatta and his deputy William Ruto command central Kenya and the Rift Valley, home to their Kikuyu and Kalenjin ethnic groups, which have supplied all of Kenya's presidents since independence.
The current government of 22 ministers has five Kikuyu and five Kalenjin members.
Odinga, from the western Luo group, dominates the west of the country and the coast, where residents feel neglected by the central government.
Cosmopolitan urban centres are largely up for grabs, although Odinga's party controls the three big cities - Nairobi, Mombasa on the coast and his home town of Kisumu.
Campaigner Githongo said politicians who failed to deliver on services or policies could only rely on ethnicity to win votes. "All the key players have been members of the same party at one time or another and none of them have really delivered," said Githongo. "Ethnicity is what distinguishes them from each other."