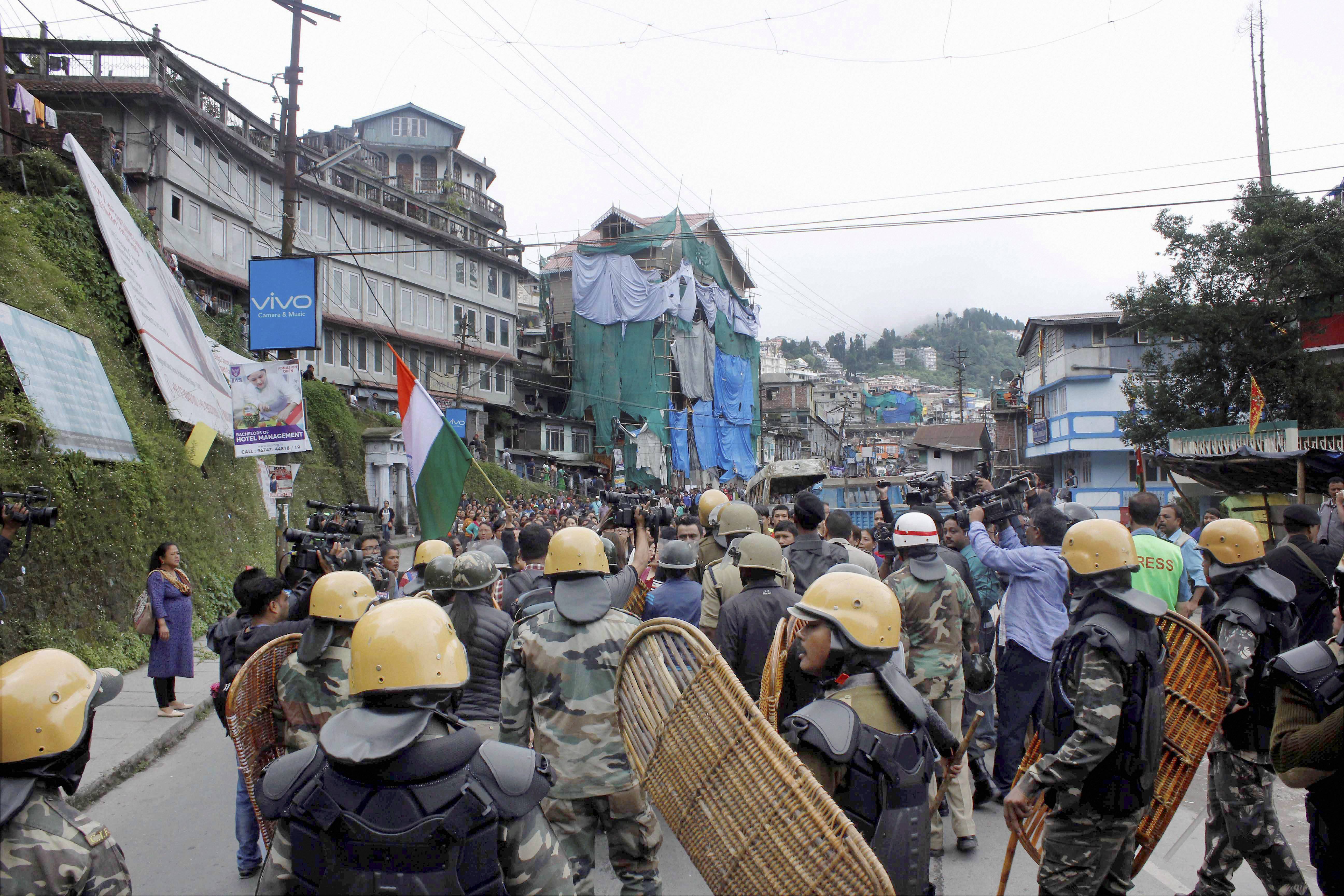 New Delhi/Darjeeling: The Centre on Tuesday despatched 600 paramilitary personnel to assist the West Bengal government in restoring normalcy in violence-hit Darjeeling hills which witnessed incidents of stone pelting on the second day of GJM-sponsored indefinite bandh.
The Centre also sought a detailed report on the prevailing situation in the hill district from the state government. A union home ministry spokesperson said that as many as 600 paramilitary personnel, including 200 women, were sent to Darjeeling.
Around 400 personnel, already stationed in West Bengal, have also been deployed in the hill areas along with additional forces. The home ministry said it was closely monitoring the situation in Darjeeling and was ready to offer all assistance to the state government to restore normalcy there.
Chief Minister Mamata Banerjee told reporters at the state secretariat in Kolkata that the situation in the hill district was 'peaceful'. She, however, said that the Centre did not seek any report on the Darjeeling situation from the state government.
As their indefinite shutdown entered its second day on Tuesday, protesters demanding a separate state of Gorkhaland hurled stones at the police at Chowkbazar area in Darjeeling after they were stopped from enforcing their shutdown in many government offices.
Senior police officers were seen leading large police contingents in various parts of the hills. Police pickets and barricades were put up in front of the government and the Gorkhaland Territorial Administration (GTA) offices and various entry and exit points of the hills, while Rapid Action Force (RAF) and a sizable number of women police personnel were also deployed.
Shops downed shutters as the violence broke out. The Gorkha Janmukti Morcha (GJM) leadership, however, accused the police unprovoked lathi-charge on its procession. "The police resorted to unprovoked lathi-charge on a peaceful rally. The more they use force against us, the more intense will be the struggle for a separate Gorkhaland state," GJM general secretary Roshan Giri told PTI.
On Monday too, Gorkhaland supporters vandalised government offices as the GJM-sponsored indefinite shutdown forced tourists out of the picturesque hill station due to threat of violence. The GJM, which controls the GTA, has called a shutdown of all state and GTA offices to press its demand for creation of a separate state.
Giri said that a meeting of six political parties, including GJM and Gorkha National Liberation Front during the day, decided to strengthen the movement for a seperate Gorkhaland. Their next meeting has been scheduled on June 20 to discuss the future course of action, he said.
GJM chief Bimal Gurung said that he was in constant touch with the Centre and was hopeful that its ally the BJP would consider its demand for a separate state "compassionately". "I am constantly in touch with the central government and various ministers. I am very hopeful that they will understand our pain and struggle and will consider our demand for a separate state of Gorkhaland.
"The government at the Centre is our ally and they will surely consider our demand compassionately," Gurung said. BJP, he said, has always been in favour of small states. The GJM chief slammed West Bengal chief minister for calling out the army to control the situation in the hills and advised her to stay away as "the people of Darjeeling are well equipped to take care of themselves".
"My advice to Mamata Banerjee is please stay away from the hills. We don't need your charity. The people of the hills will not accept TMC's hegemony," he said. Hitting out at the chief minister for calling the army to control the situation in the hills, Gurung said, "Mamata Banerjee is just pursuing opportunist politics. "In December last year she had accused the army of trying to attempt a military coup. She can do anything for the sake of cheap politics," he alleged. "We are not like her. We respect the Indian Army. Every year hundreds of youth from the hills join the Indian army," he said.