Philippines military says close to defeating rebels aligned with IS 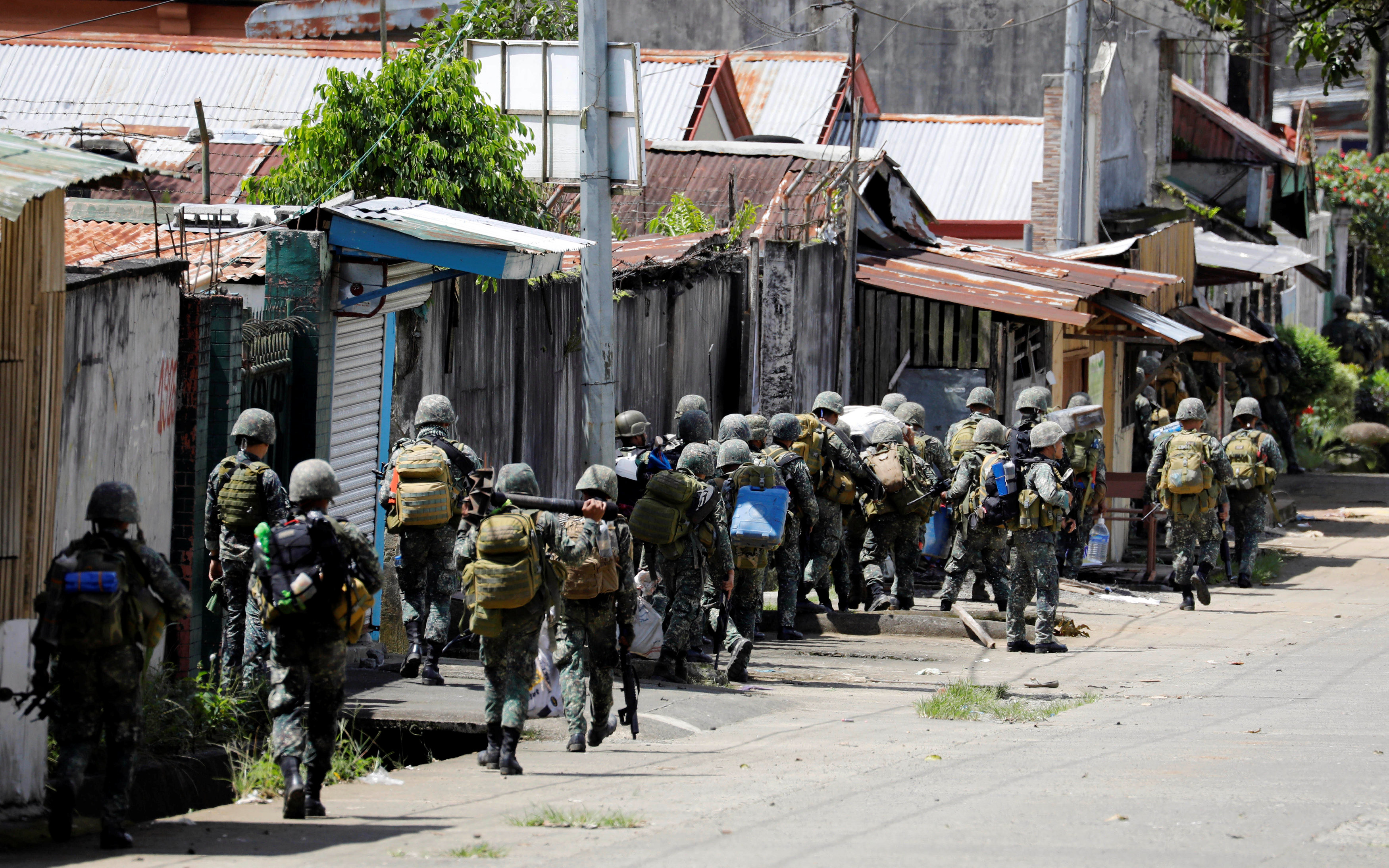 Marawi( Philippines): The Philippines military said on Monday it was close to retaking a southern city held for a seventh day by militants, as helicopters unleashed more rockets on positions held by the rebels aligned with IS.
The clashes in Marawi city with the Maute militia, a group hardly known a year ago, has become the biggest security challenge of Rodrigo Duterte's 11-month presidency, with gunmen resisting air and ground assaults and still in control of central parts of a city of 200,000 people.
The military said the rebels may be getting help from "sympathetic elements" and fighters they had freed from jail during the rampage that started on Tuesday and caught the military by surprise. "Our ground commanders have assured that the end is almost there," military spokesman, Restituto Padilla told reporters.
"We can control who comes in and who comes out, who moves around and who doesn't. And we're trying to isolate all these pockets of resistance." More than 100 people have been killed, most of them militants, according to the military, and most of the city's residents have fled.
The military said the Maute group was still present in nine of the city's 96 Barangays, or communities. The Maute group's ability to fight off the military for so long will add to fears that IS's radical ideology is spreading in the southern Philippines and it could become a haven for militants from Indonesia, Malaysia and beyond.
The government believes the Maute carried out their assault before the holy month of Ramadan to capture the attention of IS and earn recognition as a Southeast Asian affiliate. The military's estimates of the size of the rebel force and the extent of its occupation have fluctuated each day. It has maintained throughout that it is in full control of the situation and says supporters of the Maute were making exaggerated claims on social media.
According to witnesses, men with black headbands typical of IS were seen on city streets in recent days. A photograph taken by a resident shows 10 men carrying assault rifles and dressed entirely in black. A Reuters photographer saw an IS flag in an oil drum in an abandoned street on Monday, where chickens roamed in front of damaged shops and homes.
Iligan City, 38km away, was overflowing with evacuees and was on lockdown over fears that fighters had sneaked out of Marawi by blending in with civilians. "We don't want what's happening in Marawi to spill over in Iligan," said Colonel Alex Aduca, chief of the Fourth Mechanized Infantry Battalion.
Sixty-one militants, 20 members of the security forces and 19 civilians have been killed since Tuesday, when Maute rebels went on the rampage after a botched military operation to arrest Isnilon Hapilon, who the government believes is a point man for IS in the Philippines.
Some troops tried to eliminate Maute snipers on Monday as others guarded deserted streets, taken back block-by-block. Helicopters circled the lakeside city and smoke poured out of some buildings. Artillery explosions echoed. Though most people have left, thousands are stranded, worried they could be intercepted by militants at checkpoints on routes out of the city. There were still bodies of civilians in Marawi and residents urged the military to halt air strikes, said Zia Alonto Adiong, a politician involved in evacuation efforts.
"The anticipation of death is worse than death itself," he told news channel ANC. "We appeal to our military forces to do a different approach." The military said air strikes were taken on "known and verified enemy positions". "We are using precision ammunition in our surgical air strikes," said another army spokesman, Colonal Edgard Arevalo.
"We have highly skilled and trained pilots delivering the payload." Bodies of what appeared to be executed civilians were found in a ravine outside Marawi on Sunday as the crisis took a more sinister turn. Most of the eight men were shot in the head and some had bound hands.
Duterte imposed martial law last week on Mindanao, an island of 22 million people where both Marawi and Iligan are located, to quell the unrest and wipe out militancy. He made an unconventional offer on Saturday to separatists and communist rebels to join his fight against extremists, and said he would give them the same pay and benefits as government troops.