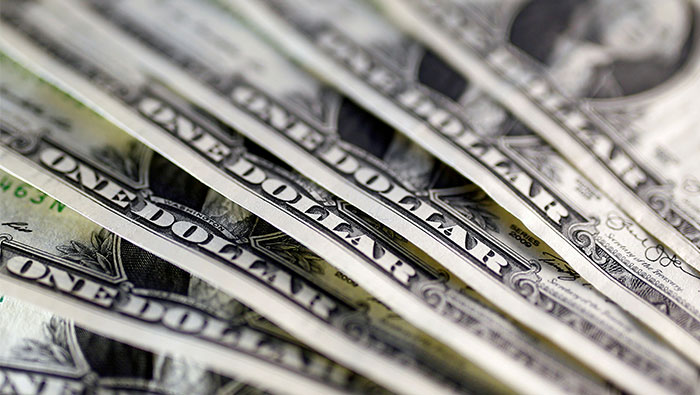 * Minutes from latest Fed meeting not as hawkish as expected
* Euro edges back towards 6-1/2-mth high
* BOC's upbeat economic view, buoyant oil boosts Canadian dollar
London: The dollar was on the defensive on Thursday, with investors low on incentives to buy the greenback after the Federal Reserve dialled down some expectations that it would hike interest rates soon, while the euro began to climb back towards a 6-1/2-month high.
Fed policymakers agreed they should hold off on raising interest rates until they see evidence that a recent economic slowdown was transitory, the minutes from their last policy meeting showed on Wednesday.
The minutes were seen to indicate heightened Fed caution towards interest rate hikes and took the wind out of an earlier bounce by the dollar, which had been plagued recently by U.S. political concerns centred on President Donald Trump.
The dollar index against a basket of major currencies . was down 0.3 percent at 96.972.
"The minutes, while leaving the door open for another rate hike weren't as hawkish as some investors had been expecting - there had been speculation ahead of time that hawkish tones could be quite supportive for the dollar," said Alexandra Russell-Oliver, currency analyst at Caxton FX in London.
"I think some of those expectations were a bit disappointed following the minutes and we've seen the dollar ease off since. That's also because it's been quite vulnerable recently."
The dollar rose 0.3 percent to 111.830 yen, pushed away from Tuesday's one-week high of 112.130 yen.
The euro, which went as low as $1.1168 overnight, was 0.2 percent higher at $1.1240, making its way back towards the 6-1/2-month peak of $1.1268 touched on Tuesday.
The common currency has enjoyed a bull run this month on factors including an ebb in French political concerns and upbeat euro zone data.
"The euro is resuming its advance with the dollar sagging on the Fed's minutes. It has the momentum to surpass the $1.1300 mark and we could see the rise continue towards $1.1500," said Daisuke Karakama, market economist at Mizuho Bank in Tokyo.
"That said, the market is low on incentives after the Fed minutes' release. We have to wait until the U.S. non-farm payrolls report for the next big event, with dealers keeping an eye on any irregular Trump-related news headlines in the meantime."
The Canadian dollar was at C$1.3405 per dollar after touching C$1.3389, its strongest since April 19, after the Bank of Canada gave a more upbeat assessment of the economy than some investors expected.
Stronger crude oil prices, which have bounced sharply from multi-month lows seen earlier in the month amid hopes that an OPEC-led production cut would be extended, have also supported the loonie this week.
Other oil-linked currencies also gained.
The Norwegian crown stood at 9.3326 per euro for a gain of about 0.2 percent on the week. The currency has managed to put some distance between a nine-month low of 9.577 plumbed three weeks ago when oil prices fell to their lowest levels since November.
The Australian dollar was 0.2 percent higher at $0.7485 after Wednesday's fall to $0.7443 following rating agency Moody's downgrade of China.
The Australian dollar is often used as a liquid proxy for China-related trades.