On The ball: Gaelic football takes root in Oman 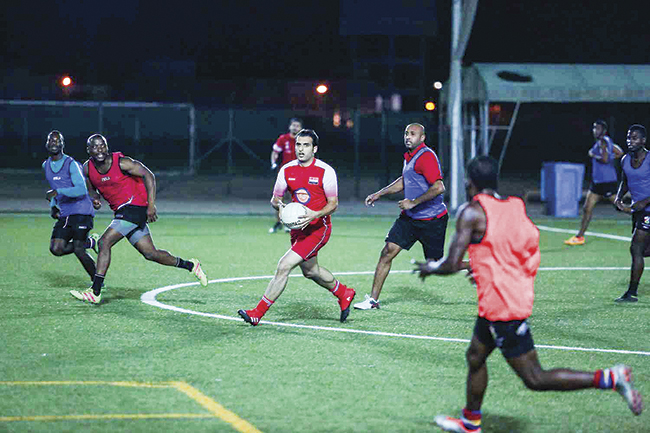 A few days ago, I received a call from reception: A gentleman named Faris Al Shaqsi was here to see me. Would I be willing to speak to him for a few minutes? Half an hour later, our conversation over, Faris had introduced me to a sport that I’d seen in the rest of the Middle East, but never knew existed in Oman as well: Turns out he was the CEO of Oman’s Gaelic Athletic Association (GAA).

Created by the Irish, Gaelic football is a hybrid of many modern-day sports, including football — the Irish call that version soccer — basketball, rugby, and volleyball, among others. But it isn’t that Gaelic football amalgamates all of these sports. It is the opposite that is true.

Turns out that the seeds of Gaelic football were sown in Oman a good four years ago. The first crop of players had actually gone on to represent the country at the World Gaelic Championships in Ireland last year, where they’d won their division, beating the likes of South Africa, Argentina and France en route to collecting the winners’ shield.

A few days ago, I hadn’t even realised Oman had a Gaelic football setup. Now, I was being given a crash course in just how quickly the game had spread: Last weekend, I saw the first green shoots of the sport sprout through Oman’s arid surface.

The Oman GAA — which organises training sessions for residents from more than 20 different nations every day of the week – had gone to great lengths to bring the sport to people in the Sultanate, by organising the Korat Qadam carnival: Two days of (Gaelic) football and fun, which would bring together teams from the Middle East and beyond. And unlike the more corporate visage that is now common with other sports, Gaelic football still retains a communal soul.

“The expansion of Gaelic football back home in Ireland happened during the economic recession,” revealed Mark Cusack, a resident Irishman in Muscat, and coach at the Oman GAA. “Many people didn’t know where their next job would come from, so this was a method for them to go and see other people, it was a way to keep them motivated and keep them going.

“That’s what we want to do here: Instil that sense of community and through Gaelic football, help improve the education of young people in Oman, because we know that this is an area that is lacking,” he added.

“We want to have exchange programmes through sport, with other countries, and through this, grow not just the sport, but other things that matter to people in Oman. A lot of Oman residents go abroad for studies, so I don’t see why we can’t bring a few students here.”

What might seem like an ambitious vision is actually fast gaining momentum. The Korat Qadam carnival had roped in Starcare Hospital for any emergency pitch-side assistance, with the Wellness Centre also standing by. Pepsi and Red Bull also pitched their support, as did two local businesses, in the form of Souq Es Sabt and new juice outlet Fever Flavor.

“Healthcare is not just about treating people when they come to a hospital, it’s about engaging with the community and ensuring that you can meet their needs in your capacity,” explained TM Kurian, Business Development Manager for Starcare.

“That way, there’s this feeling of not just the businesses growing, but the community growing along with them, and that’s how you generate a loyalty and trust between the two,” he added. “Every company should be attempting to do that, and I encourage all businesses in Oman to follow this practice. We are very happy to be part of the growth of Gaelic football in Oman.”

It is only natural to assume that this initiative will fizzle out soon, but what’s different this time is that Omanis themselves are coming forward to play the sport. It may have the word ‘football’ in, but I don’t that’s what’s attracted them towards it.

What has instead is the camaraderie, the sheer glee and determination in their eyes when they’re on the pitch, the belief that they are part of a new generation of sportsmen in their country, one who could be the start of something big. In the future, when Gaelic football is a regular fixture on Oman’s sporting calendar, remember this day. The day it all began.
—[email protected]