Macron, Le Pen exchange May Day blows on day of rallies and protests 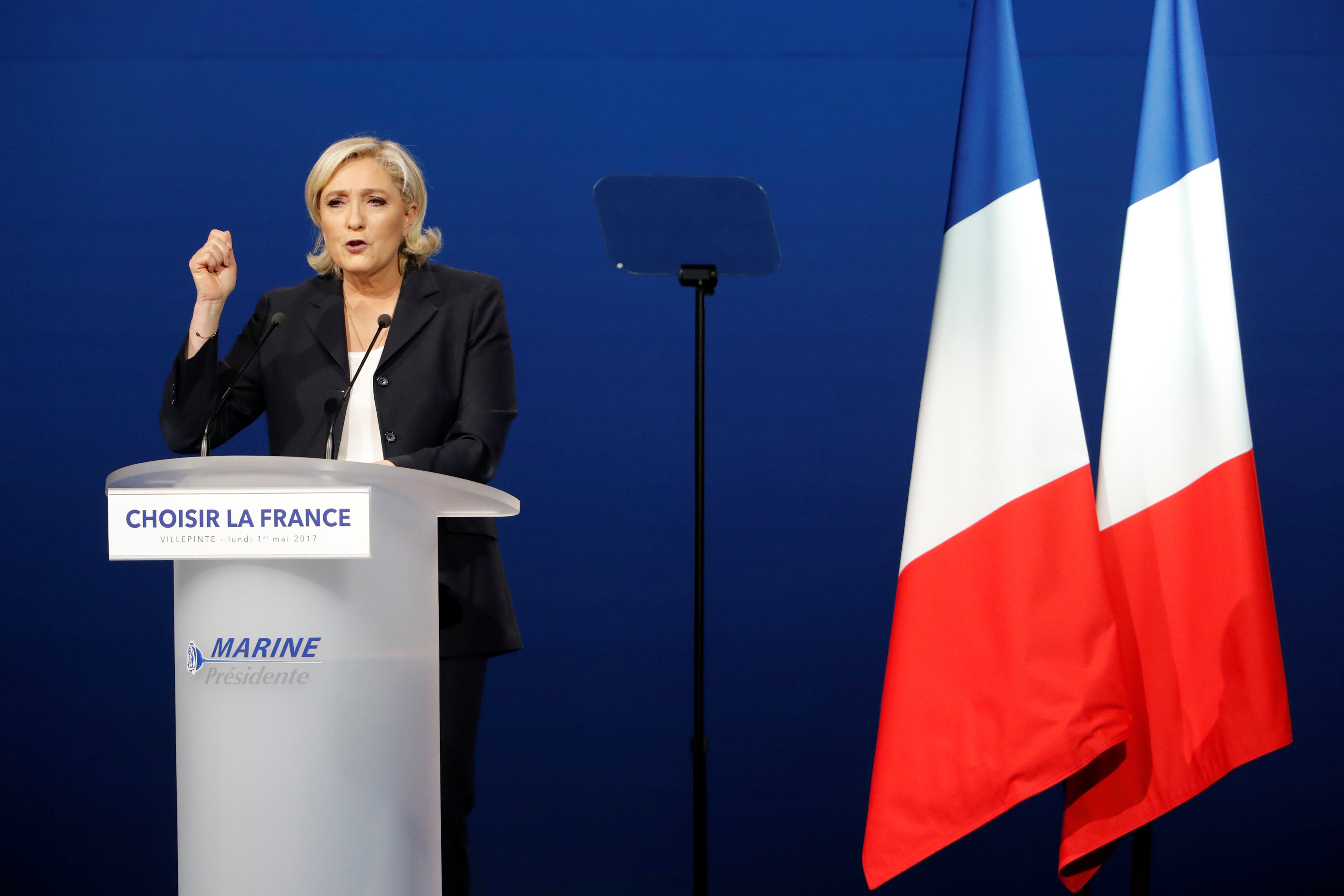 Paris: Centrist presidential frontrunner Emmanuel Macron and his far-right rival Marine Le Pen attacked each other's visions of France and the role it should play in Europe on Monday against a background of May Day rallies and protests.
Macron sought for a third successive day to paint National Front (FN) candidate Le Pen as an extremist, while she portrayed him as a clone of unpopular outgoing Socialist President Francois Hollande, under whom he served as economy minister from 2014 to 2016.
The latest opinion poll showed Macron leading Le Pen by 61 per cent to 39 ahead of Sunday's election, widely seen as the most crucial in decades.
On offer is a choice between his vision of closer integration with a modernised European Union and her calls to cut immigration and take the country out of the euro.
"I will fight up until the very last second not only against her programme but also her idea of what constitutes democracy and the French Republic," said Macron, an independent backed by a new party, En Marche! (Onwards!), which he set up himself a year ago.
He was speaking after paying tribute to a young Moroccan man who drowned in the River Seine in Paris 22 years ago after being pushed into the water by skinheads on the fringes of a May Day rally by the FN, then led by Le Pen's father Jean-Marie.
Campaigning in Villepinte, a suburb north of the capital, Marine Le Pen told a rally: "Emmanuel Macron is just Francois Hollande who wants to stay and who is hanging on to power like a barnacle."
She called for France to reclaim its 'independence' from the EU but made no mention of her proposal to drop the euro, the part of her campaign platform which is the least popular with voters, and which she has played down in recent days.
Le Pen has worked hard to cleanse the FN of xenophobic and anti-semitic associations and make it more appealing to a wider electorate. She said at the weekend she had no more contact with her father and was not responsible for his 'unacceptable comments'.
Le Pen senior gave his own traditional May Day speech at a statue of national heroine Joan of Arc, a short walk from where Macron commemorated the death of young Moroccan Brahim Bouarram.
"Emmanuel Macron is doing a tour of graveyards. It's a bad sign for him," he said. His speech before a crowd of a few hundred supporters drew chants of "France for the French!"!
At rallies in Paris, Marseille and elsewhere, some trade unionists and left-wing activists sought to turn the traditional May Day workers' holiday into a day of national solidarity against the National Front, mirroring protests in 2002 when Jean-Marie Le Pen made it through to the second round of the presidential election before losing heavily to conservative Jacques Chirac.
However, other groups, including the powerful CGT union, refused to explicitly back Macron and organised their demonstrations separately.
Masked groups of youths dressed in black were visible among protesters in the capital. BFM TV showed images of what looked like a burning shopping trolley rolled into a line of riot police and one officer set alight by a petrol bomb before his colleagues put the fire out.
Police said officers used tear gas against protesters who had injured three of their number by throwing petrol bombs.
The bitterly contested election has polarised France, exposing some of the same sense of anger with globalisation and political elites that brought Donald Trump to presidential power in the United States, and caused Britons to vote for a divorce from the EU.
The vote in the world's fifth largest economy, a key member of the NATO defence alliance, will be the first to elect a president who is from neither of the main political groupings: the candidates of the Socialists and conservative party The Republicans were knocked out in the first round on April 23.
Between them Le Pen and Macron gathered only 45 per cent of votes in that round, which eliminated nine other candidates.
The second round will take place in the middle of a weekend extended by a public holiday. A high abstention rate could favour Le Pen, whose supporters typically tell pollsters they are staunchly committed to their candidate.
She devoted much of her speech, lasting nearly an hour, to attacking Macron as the face of the establishment. He was due to speak at a Paris rally later in the day.
Referring to her plan to hold a referendum on whether France should remain in the EU, Le Pen said: "The French people will decide."
She told supporters: "I want France to get its independence back by negotiating with Brussels the return of our sovereignty."