OmanPride: Oman’s celebrity chef is cooking for a cause 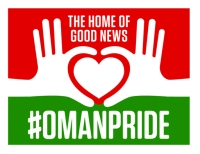 Oman’s first celebrity chef, Issa Al Lamki, who has had a dynamic career spanning more than two decades continues deriving pride and pleasure in wearing the Omani mussar (headdress) and representing Omani cuisine across the globe. “I’m proud to be an Omani chef representing the Sultanate across the world.” But apart from his culinary artistry, Chef Al Lamki also puts his mind to other issues that he is passionate about. He closely works with the Association for the Blind and is part of food charity events that are conducted for the association of the disabled. Being the brand ambassador for A’saffa chicken, he makes it a point to attend all their corporate social responsibility initiatives, especially those that include helping and providing for the poor and needy.

To spread the art and knowledge of cooking among all those who want to hone their culinary skills Chef Al Lamki has recently opened a restaurant called Hitam, with a huge kitchen.

“Training people is my dream. I want people to learn and come out of the box. The reason why my kitchen is so big is to train people right here. Whoever wants to learn cooking is most welcome to come to my restaurant and my kitchen,” said the humble celebrity chef. He started his career in 1995 at the Gulf Hotel (now Crowne Plaza), and has worked in different restaurants and hotels in many countries and has also served His Majesty Sultan Qaboos bin Said and the Prince of Saudi Arabia, Al Waleed bin Talal. “Working for His Majesty Sultan Qaboos bin Said was completely different. It was like you are working for the country,” he said. However, it was in 2009 when he was working at the palace that he got his first big break on Oman TV during Ramadan.

“I got my confidence from my director Said Moosa. He is the founder of Issa Al Lamki. He offered me a show on Oman TV during Ramadan in 2009. That was my starting point.” From there, Chef Al Lamki was invited by Bahrain TV as the Omani representative of their show titled GCC Kitchen, which featured chefs from different GCC (Gulf Cooperation Council) nations, presenting their countries’ cuisine on a widely watched show. Chef Al Lamki has represented Oman in many other nations too, where people haven’t even heard the name of the Sultanate.

“That’s exactly why I wear the traditional Omani mussar and cook authentic Omani food.” People from Italy and Paris and many other countries have now started recognising the nation by its rich food and of course the Omani hospitality that Chef Al Lamki takes with him to each of these nations.
—[email protected]