Pence reassures Japan of U.S. resolve on North Korea, to work with China 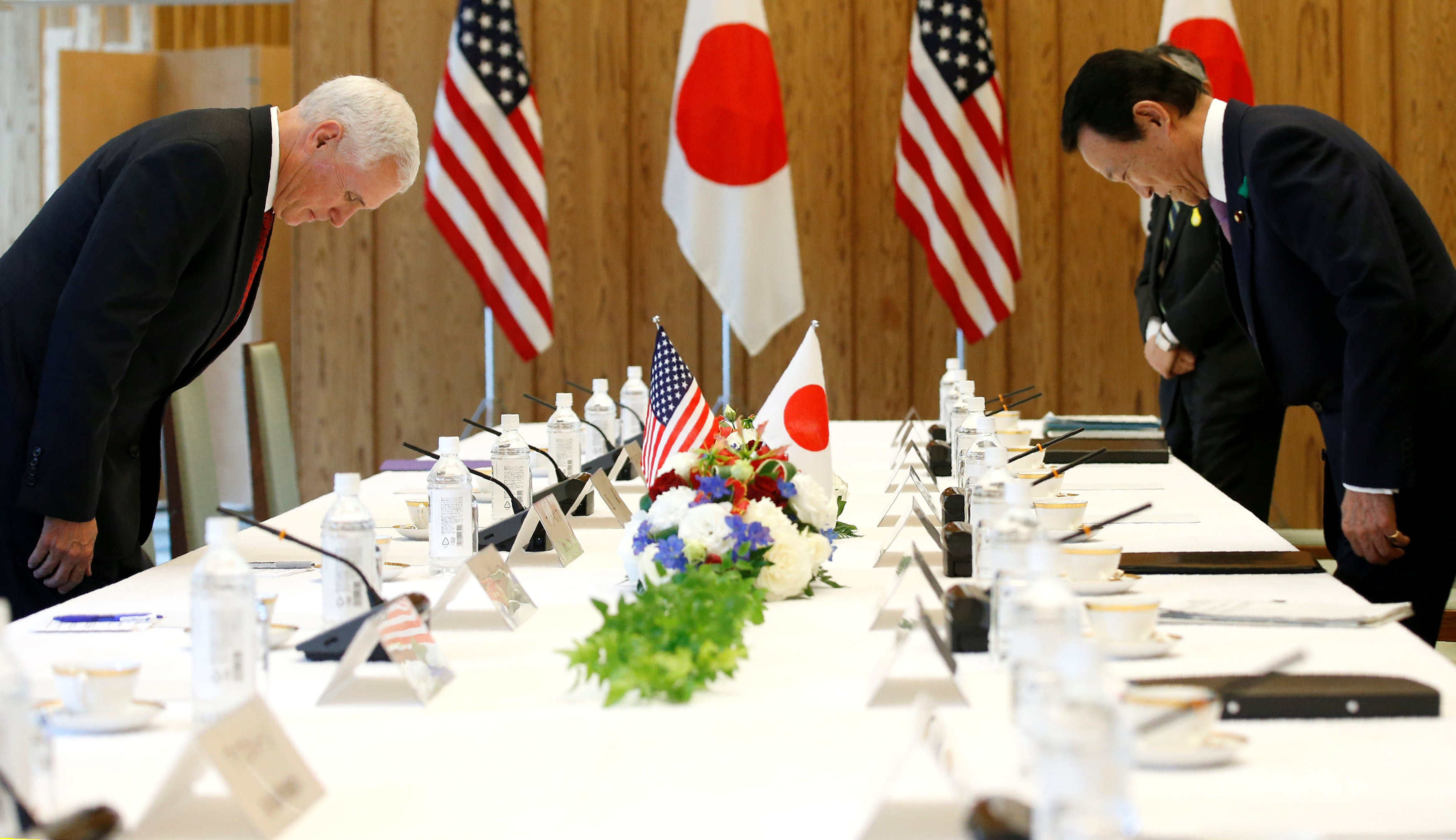 Tokyo: U.S. Vice President Mike Pence reassured Japan of American commitment to reining in North Korea's nuclear and missile ambitions on Tuesday, after warning that U.S. strikes in Syria and Afghanistan showed the strength of its resolve.
Pence arrived in Tokyo from South Korea, where he assured leaders of an "iron-clad" alliance with the United States in the face of the reclusive North, which has conducted a series of missile and nuclear tests in defiance of U.N. sanctions.
"The era of strategic patience is over and while all options are on the table, President (Donald) Trump is determined to work closely with Japan, with South Korea, with all our allies in the region and with China to achieve a peaceable resolution and the denuclearisation of the Korean peninsula," Pence said in Tokyo before lunch with Prime Minister Shinzo Abe.
Pence and Abe agreed that they needed to persuade China to play a larger role in dealing with North Korea, a Japanese government spokesman said.
North Korea regularly threatens to destroy Japan, South Korea and the United States and it showed no let-up in its belligerence after a failed missile test on Sunday, a day after putting on a huge display of missiles at a parade in Pyongyang.
North Korea's deputy representative to the United Nations, Kim In Ryong, accused the United States on Monday of creating "a situation where nuclear war could break out an any time" and said the North's next nuclear test would take place "at a time and at a place where our headquarters deems necessary".
North Korea's Vice Foreign Minister Han Song-Ryol told the BBC that missiles would be tested on "a weekly, monthly and yearly basis".
The North has warned of a nuclear strike against the United States if provoked. It has said it has developed a missile that can strike the mainland United States, but officials and experts believe it is some time away from mastering the necessary technology, including miniaturising a nuclear warhead.
Pence said on Monday the world had seen Trump's resolve in the past two weeks, with a U.S. missile attack on a Syrian airfield and the dropping of a powerful non-nuclear bomb on Islamic State fighters in Afghanistan.
The Trump administration has said military action remains an option for dealing with North Korea.
But, mindful that this would likely trigger massive retaliation and casualties in South Korea and Japan, U.S. officials say Trump's main focus is on tougher economic sanctions.
U.S. officials say tougher sanctions could include an oil embargo, a global ban on North Korea's airline, intercepting cargo ships and punishing Chinese banks doing business with Pyongyang. They also say greater Chinese cooperation is vital.
Susan Thornton, acting U.S. assistant secretary of state for East Asia, said Secretary of State Rex Tillerson and China's top diplomat, State Councillor Yang Jiechi, agreed in a phone call on Sunday on the need for strict enforcement of U.N. resolutions.
Chinese Foreign Minister Wang Yi repeated China's line that the crisis could only be resolved by diplomacy.
"I've seen that the United States has reiterated it is willing to use political and diplomatic means to resolve this, as this is their first choice," he told reporters in Beijing.
"Of course I think that any country will feel that political diplomatic means are of course the first choice," Wang said.
Pence's economic discussions in Tokyo will be closely watched to see how hard a line Washington is prepared to take on trade. Trump campaigned on an "America first" platform, and has vowed to narrow big trade deficits with nations such as China and Japan.
However, Trump has also shown willingness to link trade to other issues, saying he would cut a better trade deal with China if it exerts influence on North Korea.
China banned imports of North Korean coal, its most important export, in February, and Chinese media have raised the possibility of restricting oil shipments to the North.
But North Korea used Chinese-made trucks to display missiles at the military parade on Saturday, according to photographs, underlining the difficulty in enforcing U.N. sanctions.
China and North Korea maintain "normal contacts, including normal business contacts", said Chinese Foreign Ministry spokesman Lu Kang, when asked about the trucks.
"At the same time, as a permanent member of the U.N. Security Council, China strictly adheres to its international responsibilities, including those from Security Council resolutions," Lu told a daily briefing.
Impoverished North Korea and the rich, democratic South are technically still at war because their 1950-1953 conflict ended in a truce, not a peace treaty. South Korea hosts 28,500 U.S. troops to counter the threat from the North.
Trump's decision to launch a missile strike against Syria, a Russian ally, drop a giant bomb on Afghanistan and stick with Obama-era policies on Crimea mean Russian hopes of him befriending the Kremlin have been on the slide.
Russian state media, which hailed his election win, have made a U-turn. On Sunday, media said he was scarier than North Korean leader Kim Jong Un.
Reuters