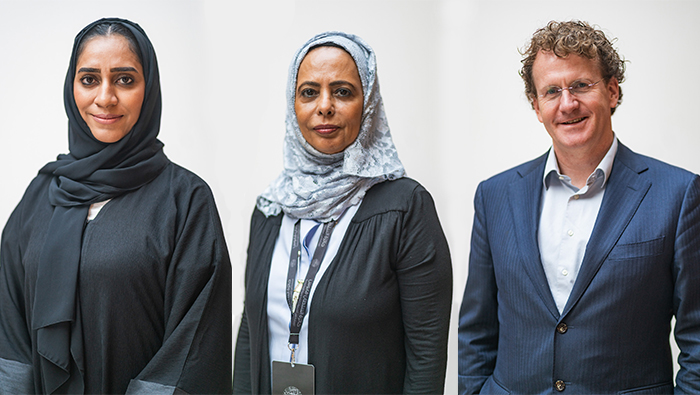 Muscat: The proceedings of the jury session of Sultan Qaboos Award for Excellence in eGovernment in its 6th round will be concluded today Thursday, in Kempinski Hotel, Al Mouj with the approval of final results and preparation of jury’s reports for all participating projects. After the selection of winning projects out of 64 submissions competing for the award, the results will be announced in an official ceremony next December.
Commenting on the success of the jury evaluation session, Sharifa Mohammed Almaskari, director, information and international relations at ITA, stated “we are pleased today to witness the success of the jury session of the Sultan Qaboos Award for Excellence in eGovernment in its 6th round. During the evaluation, we sensed the willingness of different entities from various sectors to constantly improve their services; the thing which reflect the role of the award in motivating entities to take the competition as a driver for change and efficiency in eService delivery.”
“The selected jury members of this year have expressed their satisfaction on the level of competing projects in different categories of the award. Through their examination and close observations, They were careful in the selection of the winning projects. This takes us back to the point that the selection of international juries has been based on the experience and reputation they have gained in judging international awards in the field of ICT based on the UN reports, which classify these juries as the best at their country level and their participation in international awards,” she continued.
On his contribution, Dinand Tinholt, Vice President, Capgemini Consulting and the jury chairman, Said” it is a great honor to be the chairman of such highly prestigious award in the sultanate and quite inspiring to be among a number of highly renowned international juries.” Additionally, It is impressive to witness the developments of some participating projects over the last 2 years.
“this award has great recognition in Oman, so it serves as source of inspiration and competition between entities in improving their eProjects thus encouraging further development as well as recognizing some of the great examples which can be serve as success models other entities can follow to improve their eServices,” he further added.
“there is great evolvement in the award’s categories and criteria since its launch up to this round as some categories were merged and others have been introduced as a response to the rapid advancement in technologies and the different needs of citizens, residents and businesses,” he mentioned.
"The global trend in information technology is the shift from online services to smart services, focusing on ease of trading, big data and open data, especially with emergence of new technologies such as artificial intelligence and Internet of things, so it is important that The competing entities in the award to consider these aspects to be able to provide their services effectively,” he recommended.
"The award is an incentive for government and private entities as well as SMEs to utilize information and communication systems to facilitate transactions, speed of delivery and quality of operations in line with the strategic objectives of these entities," said Dr. Taysira Albalushi, the local Omani expert participating in the jury committee of Sultan Qaboos Award for Excellence in eGovernment.
"I have benefited from the participation in the jury session considering it as an enriching experience for me. Discussing projects with a distinguished jury from various countries in the information and communication sector representing expert houses in the field of eTransformation and governance helped me to learn a great deal of information about the best experiences and practices In the field of egovernment. these discussions inspired me to reflect on research projects in the new eGovernment and here lies the importance of involving Omani juries in such national awards,” she commented.