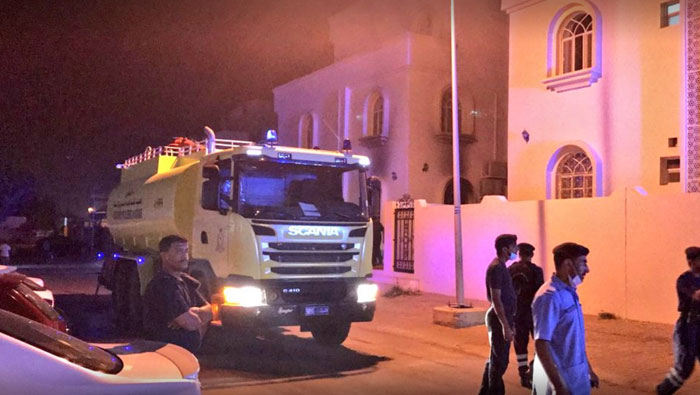 Muscat: Seven people were rescued from a fire engulfing an apartment block in Al Azaiba.
Read also: Fire cases worry residents in Muscat
The fire, in Al Azaiba, was reported late Tuesday evening and emergency rescue and fire crews from the Public Authority for Civil Defence and Ambulance (PACDA) responded.
The emergency service reported that seven people had been rescued and received treatment from ambulance crews on the scene.
“The fire was extinguished and rescued seven people dealt with ambulance teams and they’re all in good health,” the emergency responder tweeted.
PACDA has been handling ten fire incidents on an average every day since 2011. According to the last available statistics civil defence officers responded to 3,684 fire cases in 2015 compared with 3,335 in 2014. The data also shows that 876 houses went on fire in 2015, up from 755 in 2014, where the most common cause of fires in homes is faulty electrical wiring.
Residential establishments topped the list of types of fires, where 1,126 residences were affected followed by residues with 769 and vehicles at 743. Industrial and oil establishments only reported 35 and 10 fire incidents respectively.